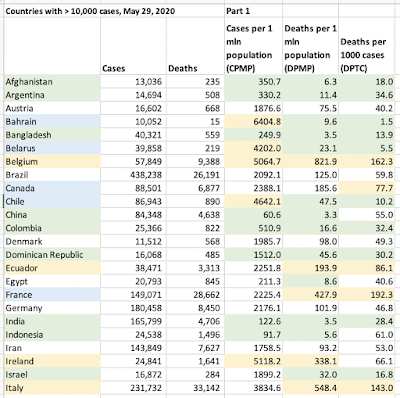 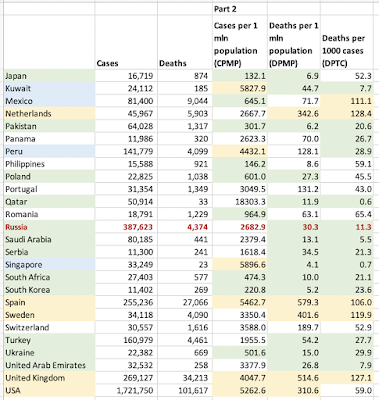 So, here are interesting observations:


Key takeaway from this: there is, basically, no point of talking about 'normal' experience with  COVID19 numbers. The system of this pandemic is extremely VUCA - high volatility, uncertainty, complexity and ambiguity of data and data dynamics imply that countries comparatives are at best handled with extreme care and on a case-by-case basis, as opposed to by referencing global averages.

Non-normality of data is severe and should steer analysis toward the median as a more valid (but still poor) central tendency measure, rather than the average.

Incidentally, as an aside, this calls into question all and any linear models that are being fitted to the COVID19 data, as, for example, in the case of the infamously bizarre research from JP Morgan claiming no changes in R0 rates during- and post-lockdowns.

Here is an illustrative case: Russia. Russian stats on COVID19 have been throughly washed through the Western media with usual scepticism and allegations that Kremlin is manipulating the data. Statistically, however, Russia is an outlier that is close to some semblance of a norm (especially considering the median).

Here is a summary: 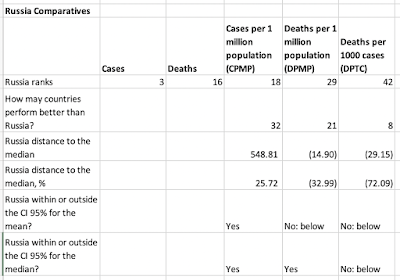 Go figure... the data is a fine mess.


Update: for the sake of explanation, the above 'exercise' using Russia is not to imply that all is 'normal' in Russian stats in some ethical or policy-based sense. It is simply to show that even outliers cases of data, like Russia, can be understood to be 'normal' based on simplistic use of statistics. COVID19 pandemic data across a range of countries is of deeply questionable value due to the lack of standardised methodologies in collecting, identifying and reporting data, due to endogeneity problem in terms of reported cases and tests deployed as well as the quality of tests deployed, due to weaker reporting systems across a wide range of economies, and potentially due to political manipulation of methodologies and reported statistics in a number of countries and sub-national jurisdictions.

Posted by TrueEconomics at 11:49 PM