As the U.S. and many parts of Europe are moving into the 'second stage' of COVID19 measures, relaxing some of the social distancing restrictions, here are some of the top-level stats on COVID pandemic evolution.


As chart below shows, there is no consistent trend in terms of reduction in global new cases or deaths: 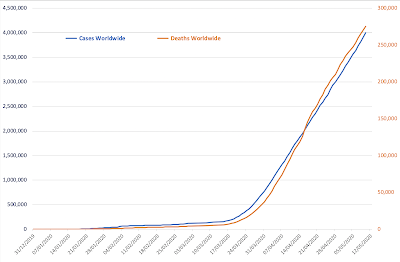 If this situation persists, it is highly unlikely we will see much of the relaxation in international travel, as global pandemic is appearing to be shifting geographically, rather than abating in overall severity.

U.S. continues to post pretty poor numbers, while EU27 is showing some significant slowdown in the pandemic progression: 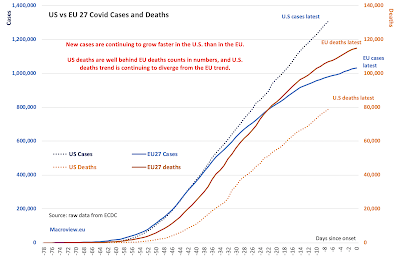 As chart above shows, U.S. now vastly leads the EU27 in terms of contagion numbers and rates. 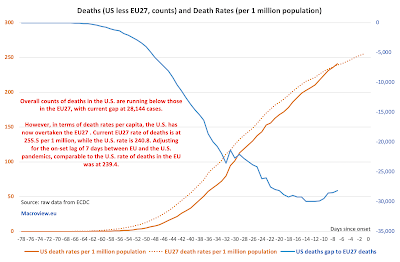 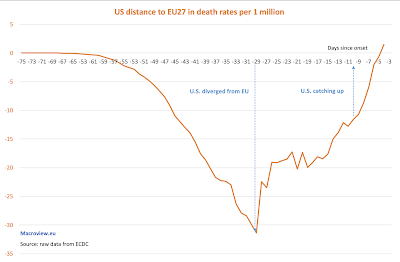 Note: "The death rate from seasonal flu is typically around 0.1% in the U.S., according to news reports", per https://www.livescience.com/new-coronavirus-compare-with-flu.html. Current global running death rate (case fatality rate) for COVID19 is at 6.9% for confirmed cases. In the U.S., case fatality rate current runs at 6.02% and in the EU27 the rate is 11.1%.

Russia continues to experience high rates of increases in new cases, with Sunday rate of 11,012 being the second highest on record, with the highest rate to-date of 11,231 recorded on May 8, 2020. The death rate recorded Sunday is at 88, ranked 7th in the history of the series. 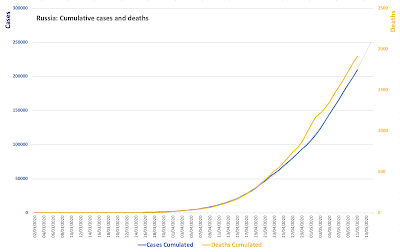 Key concerns forward are now shifting toward 'phase two' risks. Shifting from complete shutdown of economic and social activities to restricted levels of activities risks potential re-igniting of the contagion, as underlying pools of disease remain high. Both, Europe and the U.S. are in the situation where daily numbers of new cases and deaths remain well above the levels witnessed at the point of restrictions imposition. If these level were concern back then, why do the higher levels today not warrant continued restrictions?

Two links of the growing fears of re-emergence of contagion worth checking out:

Posted by TrueEconomics at 5:28 PM