G7 is a rather exclusive club of the 7 'largest' and, according to their own aspirations, most important - economically and geopolitically - economies. Except, of course, it isn't.

The latest IMF data (through 2019) and forecasts (for 2020-2021) published last month show just how bizarre the geopolitical influencer game got over the recent years and just how more bizarre it is likely to get over the next two.

Here are the actual ranks of the countries based on their GDP, taking into account exchange rates and price levels differences (the PPP adjustment).

And before you jump at myself, yes, PPP is imperfect. But it is much better than a simplistic U.S. dollar equivalence. 2014-present have taught us this lesson via what has happened in Russia: in dollar terms, the country should have disintegrated by now in another revolution of some color or flower or a cactus variety. Yet, when you look at the Government finances, Russia is doing really well, and when you look at the aggregate society, the pain of the 2014-on crises, devaluations, losses of income and declines in exports revenues has been real, but sustainable to-date. Why? Because Russia does not live on the US dollars when it comes to spending and investing in its economy. And, correspondingly, Russian geopolitical influence did not wane on foot of the economic troubles, dollar-valued economic decline and rounds and rounds of sanctions, including Russia's ejection from the G7+1/G8 grouping. Incidentally, this also explains why China isn't bothered by the G7 'leadership', nor does India miss its place in the group.

So, here we go, that table: 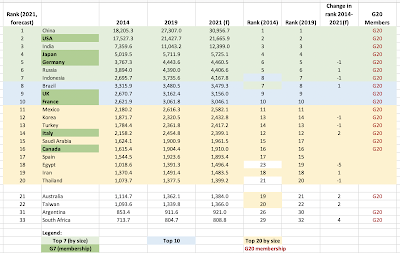 As I noted before, current G7 composition includes 4 member states which are not in the top 7 economies in the world. That means that 57 percent of the group members should not belong to the group. Worse, two of these four members are not even in top 10 economies worldwide, including 16ht ranked, but geopolitically quite loud Canada, which is just a hair-whisker away from being overtaken by globally not-too-noticeable Spain.

Better yet, Australia that loves presenting itself as some anchor of leadership in Asia-Pacific is not making it into top 20 economies in the world, having crashed out of its 19th place back in 2014 to 21st place by 2019. Australia's economic might is a bit lesser than its strategic bark, lagging behind Thailand, not to mention Indonesia.

Meanwhile, of course, the G7 excludes the largest economy in the world, as well as world's 3rd, 6th, and 7th economies. One might argue about Communism in China. One might also argue that Russia should be excluded from G7 because, well, we just don't like the Russkies as long as they are alive. But, excluding India, while including Canada and Italy?! India's economy is larger than the economies of the UK, France, Italy and Canada combined!  Excluding Indonesia? Indonesia's economy is just 3.3% shy of Italian and Canadian economies added together.

Here is a breakdown of official vs size-based groups of G7 and G20 as the share of the global GDP PPP-adjusted in 2014 vas 2019: 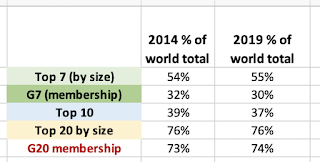 The above goes some distance explaining why G20 currently leads in global policy coordination the G7, and why G7 is rapidly falling out of relevance: back in 2014, G7 members states accounted for 32% of the global GDP based on PPP-adjustment; in 2019 they accounted for 30%. Based on the IMF forecasts, by the end of 2021, this number will likely be around 28%. Meanwhile, the share of global GDP accruing to the 7 largest economies in the world has risen from 54% in 2014 to 55% in 2019, and is forecast to rise to 56% in 2021. In other words, the actual G7 will be twice larger than the official G7.