The distributional effects of COVID19 pandemic impact on the labour markets in the U.S. will likely result in a massive debasement of the national wealth shares of the 'Main Street' segment of American society (the 90 percent) and a further increases in the national wealth share of the top 10 percent. So much is rather clear from the data on the labour markets (e.g.: https://trueeconomics.blogspot.com/2020/05/8520-path-of-tornado-us-labour-force.html).

But this process is not a unique feature of the current 'ideology' prevailing in the White House, nor is it a unique feature of the 'Republican Party ideology'. Historically, both, the Democratic Party Presidencies and the Republican Party Presidencies since the start of the 1990s on have been responsible for the dramatic drops in the share of national net worth accruing to those outside the top 10 percent of the wealth distribution. Here is the data through 4Q 2019: 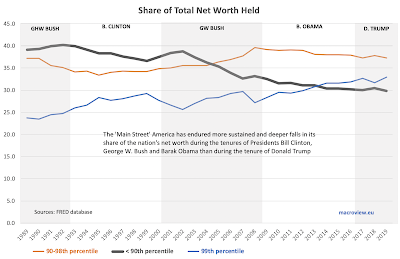 The last time, the 'Main Street America' enjoyed sustained increases in net worth was during the tenure of George H. W. Bush. Since then, there have been just one short-lived period of increase in net worth, with subsequent declines erasing fully those gains: the Dot.Com bubble during the tail end of the Clinton and the starting part of the George W. Bush administrations.

And the current Presidency is actually somewhat exceptional to the trend: under Trump Administration, American's Main Street witnessed the lowest rates of decline in their share of the national net worth of 'just' 0.13% per annum, of all post-1992 administrations. In fact, the share of the country's net worth accruing to the bottom 50 percent of Americans has risen under the Trump Presidency tenure at the fastest annualized clip since the data series started.

In simple terms, American policies of destroying the prosperity of the majority of the country's population are not reflective of the 'political divide'. Both, Democratic and Republican Presidencies have led to the effective debasement of the wealth of the American Main Street. And, in equally simple terms, the Trump Administration tenure so far has been more benign to the bottom 50 percent of the American wealth distribution than any presidency since 1989.

Like it or not, but the data is quite telling.

Posted by TrueEconomics at 5:02 PM