While everyone is chasing tails of Ruble (or Rouble / Rubel / Roubel and any other toungue-twisting permutation), here is one fact on the Russian economy:

Russian 12-month inflation was running above 9% at the end of November.

Sounds a lot. In fact, as I am typing this, one UK news report is referencing Russian inflation and telling us that if the UK were to experience such, there would have been panic. Right...

Truth is, Russia is accustomed to inflation at 7% - whether it is a positive marker or not, it is simply a fact - so 9% is a bit less of a drama than one might expect. However, end-November food price inflation is 12.6% y/y and non-food inflation is at 6%. The latter is benign, but likely to rise more. The former is a bit of concern, as Russian crops hit nearly historical records this year. Admittedly, it takes time for field-to-table route to be completed, but… According to the economy minister Alexei Ulyukayev, roughly 4% of the above inflation is down to Ruble depreciation (so expect more pressure here when December CPI is out), but 2.5% is down to imports bans under Russian counter-sanctions. Slightly confusing the message, Ulyukayev's deputy estimated that around 2.4% of full year inflation will come courtesy of Ruble devaluations (again, this will have to be revised up now).

And the crucial marker for the entire 2015 will be the 2015 crop, not estimates, but actual output, which - judging by cyclicality - is not going to be as good as this year's one.

Here's a neat chart plotting Russian CPI from 2005 on, courtesy of BOFIT. 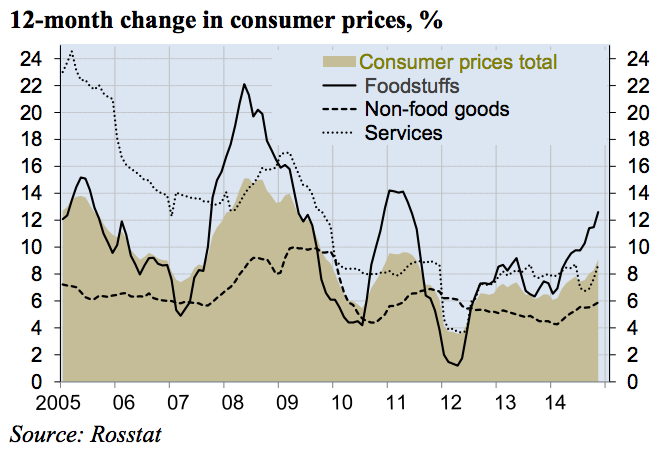 Do tell me again that the current inflation rates are a 'meltdown'… though one still has to recognise they are a concern.

Meanwhile, last week revised economic forecasts by Russian Economy Ministry were factoring in USD80 bbl Ural's price of oil for 2015. Sounds outrageously high? Not really: Brent consensus forecast by IEA-polled economists produces the expectation slightly above that. With this price assumed, Russian economy is forecast to shrink by 0.8% in 2015. Again, you might think that the world is collapsing, if you are to read current headlines related to the run on the Ruble, but let me remind you that euro area economy shrunk by 1.08% in 2012-2013 and last time I checked, Frankfurt is still around.

Russia desperately needs some breathing space on the funding markets side. And it needs to stop capital flight. If it finds solutions to these twin problems, it can weather the storm.

Note: I was asked today on Irish radio to comment on the effects of the Russian crisis on Europe and Ireland. Here is a summary of my view:

Russian imports of goods and services are likely to contract by between 12 and 15 percent in 2015, with much of this effect being driven by decline in capital goods and consumer goods imported traditionally from Europe. Second order effect is ongoing substitution of Russian imports away from Europe and in favour of Asia Pacific as a source of goods. This means that the impact on Russian demand for exports from Europe is likely to be even stronger.

In addition, financial exposures to Russia run high in Austria, Italy, France and the UK. While the European banks have strengthened of their balancesheets in recent months, another adverse shock to their assets base is not something they would like to contemplate. While it will not be a sector-defining event, continued deterioration in Russian assets valuations will not be helping.

The big unknown - Russian response to current pressures - is yet another risk factor no one in Europe needs. If Russia opts for capital controls and/or imposes a holiday on repayment of larger debt tranches coming due in H1 2015, European financial system will receive another shock as much of Russian banks and corporate funding was underwritten in Europe.

In simple economic terms, everyone around the world would benefit from Russia stepping off the financial precipice line as soon as possible.

Posted by TrueEconomics at 10:36 PM

In simple economic terms, everyone around the world would benefit from Russia stepping off the financial precipice line as soon as possible.
==
Dr. Constantin Gurdgiev

In simple economic terms, everyone around the world would benefit from Russia, and other oil-rich nations, stepping off the financial precipice as soon as possible
===
Bryan MacDonald, Russia Today 'Author'
http://on.rt.com/kfgbbb


Bryan MacDonald didn't exactly make it clear he was quoting you!