In recent posts (see all five of them linked here: http://trueeconomics.blogspot.ie/2014/12/12122014-qna-q3-2014-irish-external.html) I covered in detail the latest official stats on Irish economic recovery/growth. The picture these figures present is of basically static domestic economy, with questionable quality 'exports-led recovery'.

So what's can one add to the above? Ah, just a couple of recent surveys.

Remember, the political meme is that the recovery is charging ahead and is trickling down to ordinary families and into the real economy. Which, naturally, suggests that households should be feeling better. If not fully 'great', at the very least better… So do they?

We can look at consumer confidence indicators from the ESRI to check. Alas, these are bearing negative relation with actual domestic demand. Still, on a shorter note, core retail sales have been rising recently - in volume - and a starting to show some life in value. Chart below illustrates just how weak the 'real recovery' has been despite the sentiment - as measured by ESRI - has been allegedly at all time highs: 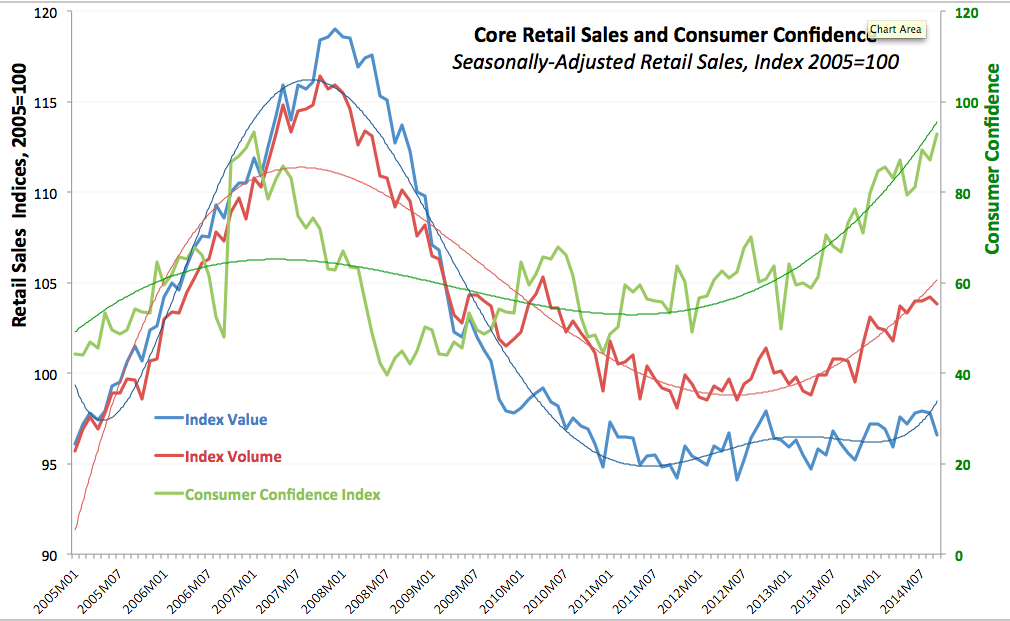 But there are other surveys to look at.

Based on Amarach data: in April 2014, 41% of Irish people thought Ireland is a great place to live in. By November 2014 this rose to 56%.But less than half of us felt that there are
opportunities in Ireland for those who are prepared to seek them out (49% in November, still, a rise on 42% in April 2014). So the 'recovery' is not exactly the one where opportunities for betterment are being presented, even if we control for effort.

Good news is - people are getting more optimistic: in November, 56% of surveyed felt that better times lie ahead for the Irish economy, up on 48% in April. Hopium is a powerful drug, especially when dispensed in massive doses of Government-paid-for PR via all channels of traditional media. Allegedly, quality of life in Ireland is ranked as being high by a rising proportion of people too: from 48% in April to 56% in November, although we have no idea what this means, really, this should translate into a feel-good factor of sorts. Right? Well, let's give it a pause and think - the above are all issues relating to 'us' as a collective. Let's see what surveys said about personal.

View: "I feel angrier about austerity now than I have ever felt before." If things are so good at collective levels, surely they should good at personal level too? In November 2014, 49% of surveyed agreed with the above statement and only 16% disagreed. Wow! All the recovery and the goodies from the Budget 2015 and those feeling angrier with the state of our policies is outstripping those who do not by more than 3:1.

Confirming the above, 59% of Irish people felt that economic pressures are making them  depressed. Only 24% disagreed. 39% of Irish people felt that the economy (not the economists) is having a negative impact on their personal health. 29% disagreed. When asked of they feel being successful/very successful in managing their finances, 56% of us agreed back in September 2013, 50% agreed in April 2014 survey and 50% in November 2014 survey. So things are not getting better in terms of our perceived financial health over time. They are getting worse.

Do the people plan to 'vote' with their money for the recovery? Don't hold your breath, folks. Only 16% of us said they will loosen the purse strings a bit next year. 49% said they won't.

Here are some numbers on how we feel about the state of our financial affairs, not as a nation or as Troika

Well, the last line in the table above is telling.

But may be the above data is suspect? Well, why not check with the 'Optimists par excellence' from the ranks of Big 4 'consultancies'? Let's take a look at Deloitte. Surely they can see the optimism around?

Check out their H2 2014 Consumer Review. Here are the snapshots:

We feel, predominantly, no better about all major points of economic well-being today: 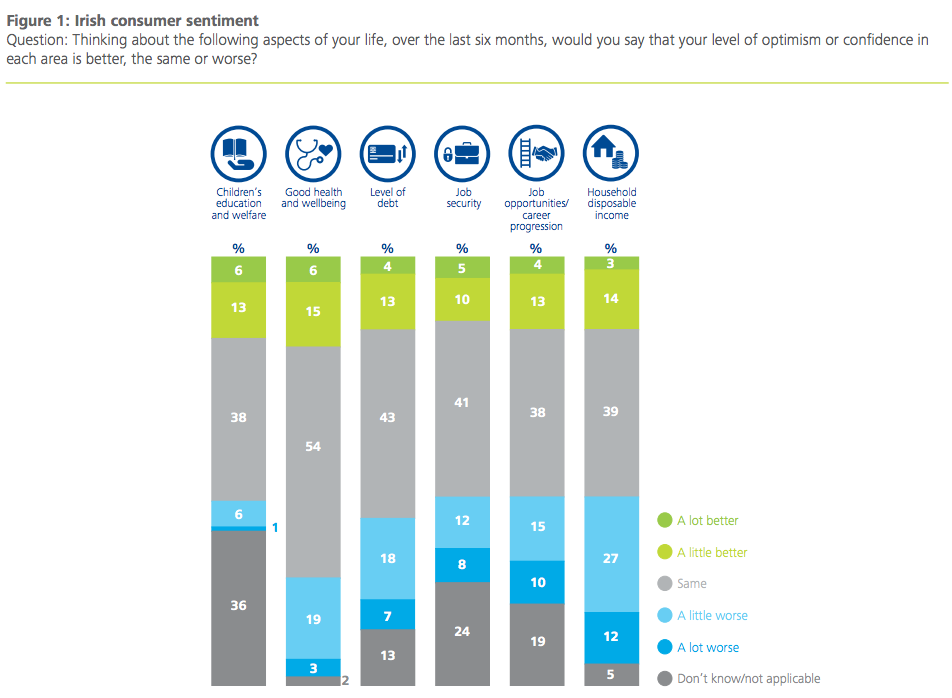 And we want to save more, spend less and borrow less: 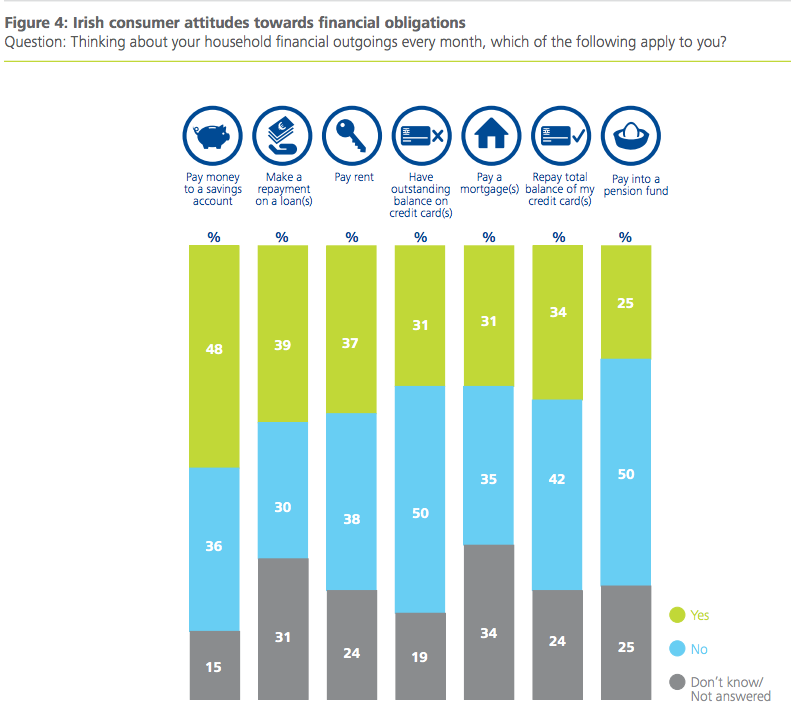 So where's that 'trickle down' optimism contagion from all the feel-good policies the Government allegedly lavishing upon us all? Spot one beyond those jobs-for-life-and-pensions-for-free walls of the Government 'think tanks', if you can…

Posted by TrueEconomics at 9:35 AM

It seems to me that, just as soon as there's any economic good news, the cost of living shoots up to ensure that no-one gets to enjoy it. Landlords are jacking up rents for no apparent reason than "because they can", and house prices are also ramping. The economic structure in Ireland now seems designed to ensure that only rentiers will see any benefit from it.