29/12/2014: Historical Evidence on the Size of Fiscal Adjustments


A recent IMF paper looked at the historical precedents of large scale fiscal adjustments across advanced and emerging economies in the aftermath of the major fiscal crises. Escolano, Julio and Mulas-Granados, Carlos and Terrier, G. and Jaramillo, Laura paper titled "How Much is a Lot? Historical Evidence on the Size of Fiscal Adjustments" (IMF Working Paper No. 14/179. http://ssrn.com/abstract=2519005) argue that "the sizeable fiscal consolidation required to stabilize the debt-to-GDP ratios in several countries in the aftermath of the global crisis raises a crucial question on its feasibility."

To answer this question, the authors look at historical evidence "from a sample of 91 adjustment episodes of countries during 1945-2012 that needed and wanted to adjust in order to stabilize debt to GDP."

"We find that in most cases fiscal adjustment is sizeable and the debt-to-GDP ratio stabilizes by the end of the episode, albeit at higher levels. In at least half of the episodes, countries managed to improve their primary balance by 5.4 percent of GDP (4.8 percent of GDP in cyclically adjusted terms). The sample distributions of the levels and changes in the primary balance (actual and cyclically adjusted) show that, while there are significant differences across advanced and developing countries in terms of the levels of primary balances achieved, the changes in primary balances are comparable across the two groups."

"The fiscal adjustment implemented was enough to close the primary gap in two-thirds of the episodes. This implies that debt stabilized, and in most cases was put on a downward trend." Given the hope-inspiring dynamics above, however, the follow-up is less impressive: "This does not however imply that debt returned to initial levels. While countries kept primary balances well above those observed before the adjustment episode, they did not sustain primary balances at the highest levels for prolonged periods of time. This suggests that countries make substantial efforts to stabilize debt but, once this is achieved, they see room to ease primary balances and do not necessarily seek to get back to the lower initial debt-toGDP ratio."

"We find that consolidations tended to be larger when the initial deficit was high and adjustment efforts were sustained over time." In addition, "Several factors are found to be significantly associated with the size of fiscal adjustments. …The results also show that fiscal adjustment tended to be higher when accompanied by an easing of monetary conditions (as measured through a reduction in short-term interest rates) and, to a lesser extent, an improvement of credit conditions (measured as the change in credit to the private sector as a percent of GDP), especially in advanced economies." 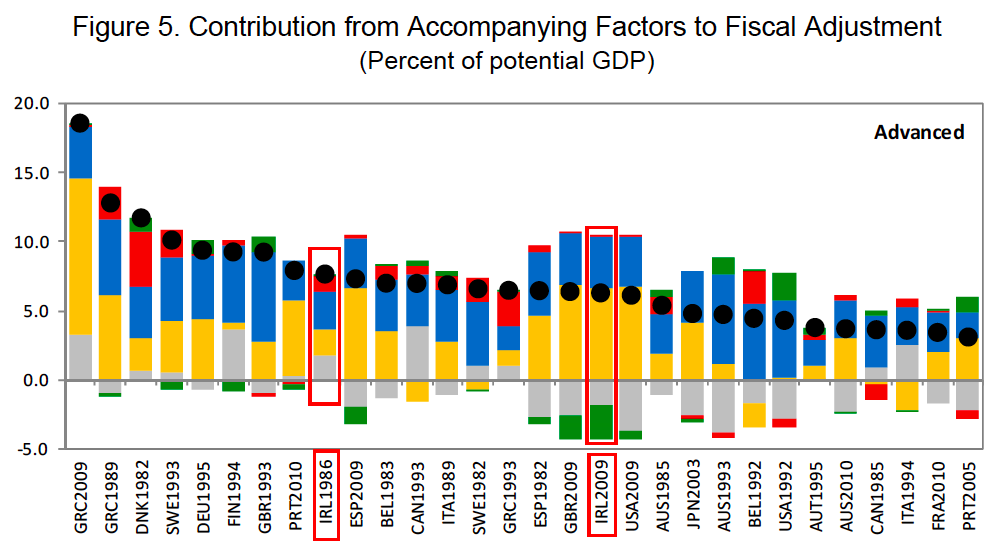 So what does the above tell us about Euro area peripherals' adjustments? IMF paper says that things tend to go well when:


Not that any of the above will pause the IMF public statements about sustainability of adjustments everywhere and anywhere.
Posted by TrueEconomics at 10:38 PM