Deutsche Bank note from earlier this month covering Russian banks is telling as to the nature of the problems.

Per DB: "A tighter funding situation and weak economic growth will dampen credit expansion, although Russian banks’ dependence on external funding is not strong. Rising NPLs will negatively impact profitability, but the government’s capacity to provide support to systemically important banks remains strong."

So in summary, few illustrations of the above.

There is a weak credit impulse in Russia through Q2 2014 (this is likely accelerated in Q3-Q4), especially on foot of hikes in CBR rates: 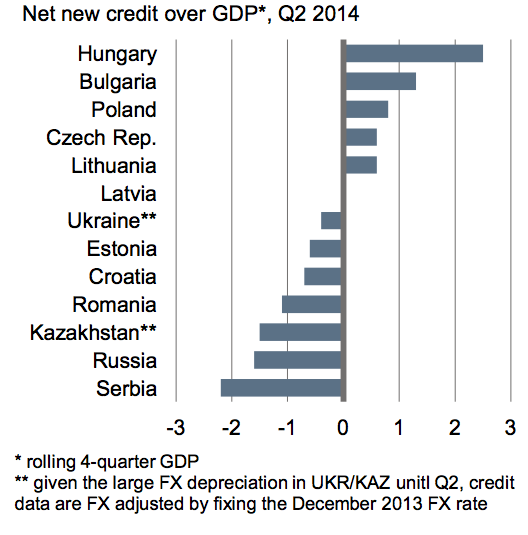 But credit growth remains elevated, albeit it is subdued relative to historical averages: 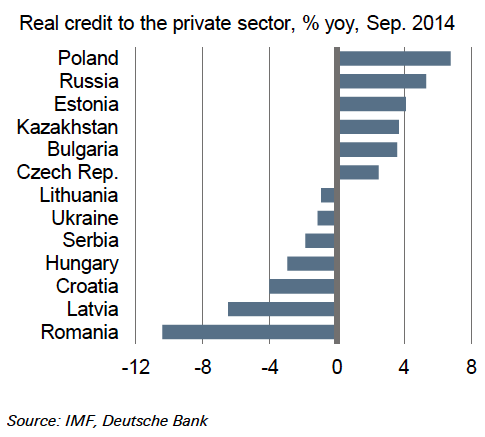 DB conclusion on growth potential is cautious: "Russian banks are facing several challenges. As economic growth is projected to remain weak and the banks’ external funding situation has tightened given EU and US sanctions, real credit growth is expected to slow down from the current 11% yoy (October data referring to total domestic credit)."

Still, "overall asset quality remains adequate (NPLs at 6.7% of total loans as of September), but it is likely to deteriorate over the coming months as the economy is close to recession and consumer indebtedness is growing. Moreover, rising loan loss provisions (with provisioning levels currently at 70% of total NPLs) and higher funding costs will have a negative impact on profitability over the next few quarters.

Capitalisation levels are moderate, with the ratio of core capital to risk-weighted assets standing at 9.4% in September. The Central Bank has started preparing Russian banks to meet Basel III capital requirements. But it recently delayed the implementation of the Basel III liquidity requirement by six months to July 2015, taking into account difficulties in obtaining long-term funding."

Worth noting that the delay is no longer: Russia introduced new bank recaps this week: http://www.reuters.com/article/2014/12/19/us-russia-crisis-banks-capital-idUSKBN0JX0R620141219

Amazingly, Russian banks overall are not as reliant on foreign funding as one would have expected: "…a closer look at the funding structure of Russian banks shows that they are not overly dependent on external funding, which accounts for less than 20% of total debt liabilities. The share of the potentially most volatile funding sources (foreign interbank funding, syndicated loans, Eurobonds) has decreased since the financial crisis in 2008/2009. Non-resident deposits account for half of the USD 209 bn external bank debt outstanding. Moreover, only USD 44 bn of external bank debt will fall due within the next 14 months (see figure 5), with the largest 30 financial institutions holding an FX buffer of USD 32 bn (difference between FX liquid assets and FX liabilities maturing in the next five quarters)." 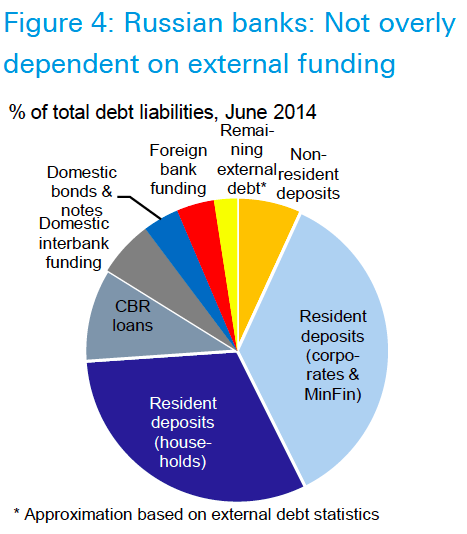 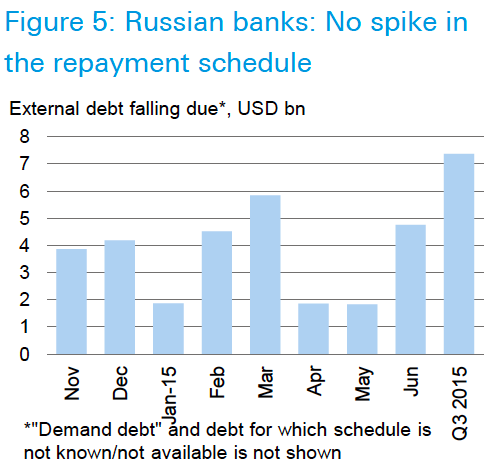 Few caveats: "…when assessing the external debt of Russian banks, two contrasting data specification aspects have to be kept in mind. On the one hand, part of banks’ external borrowing is inter-company lending, which tends to be rolled over and thus mitigates external funding risks (figure 6 shows a proxy for this lending). On the other hand, bank external debt might be underestimated by the CBR using the “residency” and not the “nationality” concept of the borrower. Figure 7 shows that banks’ international debt securities falling due are significantly higher when using the nationality rather than the residency concept (USD 16.4 bn vs. USD 1.3 bn)."

But the key, so far, is the non-performing loans:

Clearly, Russian banking pressures from NPLs are, for now, benign. DB warns: "we expect NPLs to increase in Russia and Ukraine given the bleak economic outlook and currency weakness (against the background of relatively high levels of FX- denominated loans, especially in Ukraine)." Question is: what about provisioning cushions? Well, Russian banks seem to be fine here too: 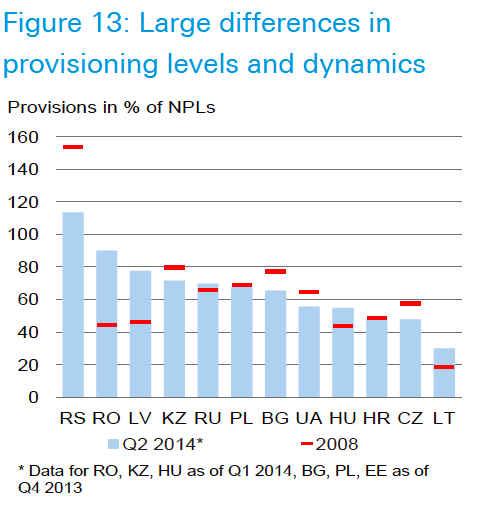 On the net, DB warns that tough times are still ahead for Russian banks. I would agree. This week's changes in mark-to-market accounting rules and repo collateral quality requirements, as well as recpaitalisation of the banks are strengthening the system buffers to deal with shorter term aspects of the crisis. Higher policy rates (17% for key rate) are net positive for deposits, but negative for mortgages and credit. So where the balance of these changes lies is anyone's guess at this point in time.

Posted by TrueEconomics at 11:57 AM