This is an unedited version of my Sunday Times article from May 13, 2012.


With Greek and French elections results out last week, the European leadership is rapidly shifting gears into neutral when it comes to austerity. Within two weeks surrounding the French elections, the Commission has issued a set of statements pushing forward its ‘growth budget’, and issued new proposals for enhancing European investment bank.

This, of course, is a classic rhetoric of damage limitation, contrasted by the reality of the currency union that is in the final stage of the crisis contagion. Having spread from economic to financial and subsequently to fiscal domains of the euro area, the cancer of Europe’s debt overhang has now metastasised to its political leadership. And the financial pressures are back on. Since the late March, credit default swaps spreads have widened for all but two core euro area states (excluding Greece), with an average rate of increase of 10.6%, implying that the markets-priced cumulative probability of the euro zone country default within the next 5 years is now, on average, close to 24%.

Next stop is a period of extended navel-gazing, with summits and ministerial dinners, contrasted by the European electorate moving further away from the centre of power gravity.

By autumn we will be either in a selective euro unwinding (Greece exiting) or in a desperate policies u-turn into mutualisation of the national and banking debts, supported by a return to high pre-2011 deficits and an acceleration of the debt spiral.

The former is going to be extremely disruptive in the short run. Portugal will be watching the Greeks closely, while Spain and Italy will be sliding into unrest. If properly managed, Greek and, later Portuguese exits will allow euro area to cut losses. With a stronger ESM balancesheet, euro area will buy more time to deal with the markets panic, but it will still require serious structural adjustments to shore up the failing currency union. Mutualisation of debt will remain inevitable, but deficits run up can be avoided in exchange for slower reduction in deficits.

The latter option of starting with mutualising debt, while allowing for new deficit financing of growth stimuli will be a road to either a collapse of the common currency within a decade or a Japan-style stagnation. The central problem is that the current political dynamics are forcing the euro area onto the path of growth stimulation amidst a severe debt overhang. The lack of real catalysts for economic recovery means that a temporary stimulus will have to be replaced by sustained debt accumulation. In other words, the political cure to the crisis a-la Hollande, not the austerity, will spell the end of the euro zone.

There are two sides to this proposition.

Firstly, the villain of the European austerity is a bogey. In 2011-2012, euro area fiscal deficits will average 3.7% of GDP per annum, identical to those recorded in 2010-2014 and deeper than in any five-year period from 1990 through 2009, including the period covering the recession of the early 1990s. The ‘savage austerity’, as planned, is expected to result in historically high five-year average deficits. At over 3.2% of GDP, 2012 forecast deficit for the common currency zone will be 6th largest since 1990.

Instead of shrinking, euro area governments over-spending will remain relatively static under the current ‘austerity’ path. Per IMF, general government revenues will account for 45.6% of GDP in 2011-2012, well ahead of all five-year period averages since 1990 except for 1995-1999 when the comparable figure was 46% of GDP. The same comparative dynamics apply to the government expenditure as a share of GDP.

In other words, euro area voters are currently revolting against the austerity that, with exception of Greece and Ireland, is hardly visible anywhere.

Secondly, the talk about Europe’s growth stimulus is nothing more than a return to the policies that have led us into this crisis in the first place. In 1990-1994, euro area public debt to GDP ratio averaged 59%. By 2005-2009, the average has steadily risen to 71%. In 2010-2014, the forecast average will stand at 89%, identical to the ratio in 2011-2012. Euro area is now firmly stuck in the policy corner that required accumulation of debt in order to sustain economic activity. Since the mid-1990s, the EU has produced one growth policy platform after another that relied predominantly on subsidies and public investment.

By the mid-2000s, the EU has exhausted creative powers of conceiving new subsidies, just as the ECB was flooding the banking system with cheap liquidity. At the peak of the subsequent sovereign debt crisis, in March 2010, Brussels came up with Europe 2020 document – yet another ‘sustainable growth’ scheme through featuring more subsidies and public investment.

At the member states’ level, private debt-fuelled construction and banking bubbles were superimposed onto public infrastructure investments schemes and elaborate R&D and smart economy bureaucracies as the core drivers for jobs creation. State spending and re-distribution were the creative force driving economic improvements in a number of countries. Amidst all of this, euro area overall growth remained severely constrained. For the entire period between 1992 and 2007, euro area real economic growth averaged less than 2.1% per annum, while government deficits averaged over 2.5%. The only three years when public deficit financing was not the main driver of growth were the peaks of two bubbles: 2000, and 2006-2007.

In brief, Europe had not had a model for sustainable growth since 1992 and it is not about to discover one in the next few months either.

Which brings us to the core problem facing the European leadership – the problem of debt overhang.

As a research paper by Carmen M. Reinhart, Vincent R. Reinhart and Kenneth S. Rogoff published last week clearly shows, “major public debt overhang episodes in the advanced economies since the early 1800s [were] characterized by public debt to GDP levels exceeding 90% for at least five years.” The study found “that public debt overhang episodes are associated with growth over one percent lower than during other periods.” Across all 26 episodes studied, “the average duration …is about 23 years.”

Now, according to the IMF data, the euro area will reach the 90% debt to GDP bound in 2012 and will remain there through 2015. Statistically, the euro area will be running debt levels in excess of 90% through 2017. Between 2010 and 2017, IMF forecasts that seven core euro area states will be facing debt to GDP ratios at or above 90%. Of the four largest euro area economies, Germany is the only one that will remain outside the debt overhang bound. Increasing deficits into such a severe debt scenario would risk extending the crisis.

After two years of half-measures and half-austerity, the euro as a currency system is now less sustainable. The survival of the euro (even after Greek, Portuguese and, possibly other exits) will depend on structural reforms, including change in the ECB mandate, political federalisation and fiscal harmonisation beyond the current Fiscal Compact treaty.

The real problem Europe is facing in the wake of the last week’s elections in Greece and France is that traditional European elites are no longer capable of governing with the tools to which they became accustomed over decades of deficits and debt accumulation, while the European populations are no longer willing to be governed by the detached and conservative elites. Not quite a classical revolutionary situation, yet, but getting dangerously close to one. 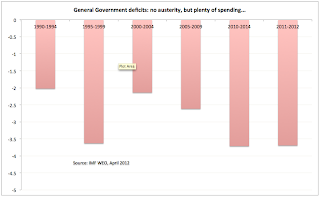 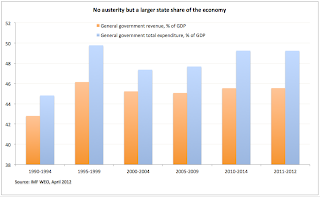 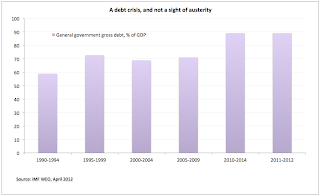 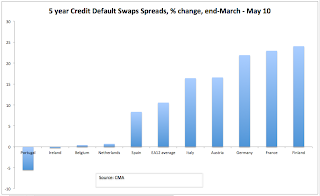 Box-out:
This was supposed to be a boom year for car sales as the threat of getting an unlucky ‘13’ stuck on your shiny new purchase for some years was supposed to spell a resurgence in motor trade fortunes. Alas, the latest stats from the CSO suggest that this hoped-for prediction is unlikely to materialise. In the first four months of 2012, new registrations of all vehicles have fallen 8.5% year on year and 60% on 2007. New private cars registrations have suffered an even deeper annual fall, down 10.2% year on year although since the peak they are down ‘only’ 56%. The news of the motor trade suffering is hardly surprising. Unemployment stuck above 14%, fear of forthcoming tax increases in the Budget 2013, plus the dawning reality that sooner or later interest rates (and with them mortgages costs) will climb sky-high are among the reasons Irish consumers continue to stay away from purchasing large ticket items. Cyclical consumption considerations are also coming into play. Over the last 4 years, Irish households barely replaced their stocks of white goods. Given the life span of necessary household appliances, the households are likely to prioritize replacing ageing dishwasher or a fridge over buying a new vehicle. Families compression with children returning back to parental homes to live and grandparents taking over expensive crèche duties are also likely to depress demand for cars. Lastly, there is a pesky consideration of the on-going deleveraging. Irish households have paid down some €36 billion worth of personal debts and mortgages in recent years. Still, Irish households remain the second most indebted in the Euro area. New cars registrations fall off in 2012 shows that in the end, sanity prevails over vanity and superstition, at the detriment to the car sales industry.
Posted by TrueEconomics at 11:52 AM