Live Register figures released yesterday provide the evidence for continued flat trend in unemployment with mild volatility to the downside. There are some mixed news coming out of data, worth highlighting - both positives and negatives.

On the neutral side: Live Register implied unemployment rate slipped to 14.3% in March from 14.4% in January and February. This marks a decline from the peak of 14.6% in November 2011. There has been little volatility in the series along the trend since the beginning of the crisis (in part due to subsequent revisions of LR to closer align with QNHS) and this means that 0.1 percentage point move mom is statistically significant. However, given future revision of the data, there is little economic significance to the change. Overall level of unemployment remains elevated. Adding to the Liver Register those who are excluded because they participate in State-sponsored training programmes (see more on this below) would have seen implied unemployment rate closer to 16.6%, instead of 14.3%. 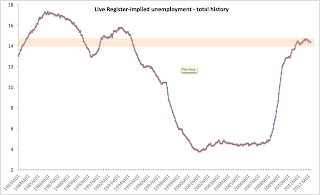 Total number of Live Register signees, seasonally adjusted, stood at 434,800 in March 2012 against 437,800 in February 2012 and 443,100 in March 2011. As I noted before, seasonal adjustment is starting to look slightly off to me - perhaps due to changes in methodology and partially, most likely, due to change in the longer-term trend - the establishment of the relatively flat trend within a narrow band at around 430K-450K since H2 2010 that replaced robust upward trend late 2007 through H1 2009. Nonetheless, if we are to have some goods, here it is:


The CSO also published numbers for February 2012 participation in the Government-run training programmes. Participants in these are not included in Live Register, despite the fact they clearly are in receipt of state benefits. Here, the story is not great - in terms of what I would call 'hidden' unemployment, or perhaps the things are wonderful, given at least some of those in training are getting marketable skills and might be able to transition into jobs. Let's be neutral. 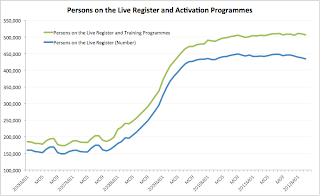 In February 2012 there were 71,393 individuals engaged in Live Register Activation Programmes of various types. This represents an increase on 62,346 in same programmes in February 2011. The CSO supplied data for similar participants from February 2008. Using rather crude means of taking average increases in 2008-2010 and reversing the data from 2008 back into 2006, chart above plots the 'estimated' (inverted commas are to highlight the fact that for 2006-2007 this data is just purely illustrative, although from 2008 it is reflective of CSO actual figures) Live Register inclusive of those in Activation Programmes.

On a positive note, monthly decline in the Live Register in march was 6th largest since the beginning of the crisis: 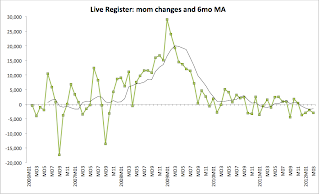 So, as I usually say, some things to cheer about, but let's keep it real - unemployment problem is not going away. One has to keep in mind that LR benefits do run out and people drop off the LR. In addition, rampant emigration is clearly playing a factor here. Unfortunately, CSO does not provide reliable and timely data on jobs creation and destruction to make any determination as to whether the small changes in the Live Register are signifying improved labour markets trends or not.

Next post - some details on nationalities on the LR, part-time employment and other sub-trends.
Posted by TrueEconomics at 1:18 PM