A year has lapsed since the much-lauded publication of the first set of the Prudential Capital Assessment Review results – the stress tests – by the Central Bank of Ireland.

Covering the four core banking institutions subject to the State Guarantee, AIB, Bank of Ireland, Irish Life & Permanent and EBS, the tests were designed to be definitive. Once recapitalized by the Exchequer in-line with the PCAR, Irish banks were supposed to be returned to health – recommencing lending to the SMEs and households, returning to normal funding markets around 2013, while continuing to shed loans to improve their balance sheets.

The PCAR made some major predictions with respect to the banking sector performance over 2011-2013 that were not subject to Nama-imposed losses and, as such, are expected to continue into the future. Chiefly, the Central Bank allowed in its stress scenario for the lifetime losses of €17.2 billion on the residential mortgages books of the four institutions. Only €9.5 billion of these were forecast to hit in 2011-2013. Owner-occupier mortgages losses provided for 2011-2013 amounted to just 60% of the above. Post-2013, it was envisaged that the Irish banking system will be able to fund remaining losses out of its own operations with no recourse to the Exchequer assistance.

Having published the PCARs, the Irish Government proceeded to take a break from the banking crisis. Throughout the second half of 2011 there was a noticeable ‘We’ve sorted the banks’ mood permeating the refined halls of power.

Fast-forward twelve months. Annual results for the four domestic State-guaranteed banks for 2011 are, put frankly, alarming. Set aside for the moment the entire media spin about ‘lower 2011 losses compared to 2010 records’. Once controlled for Nama effects on 2010 figures, the data shows acceleration, not an amelioration of the crisis on the mortgages side.

Excluding IBRC, total amount of owner occupied mortgages that remain outstanding on the books of AIB and EBS, Bank of Ireland and PTSB comes to €71.8 billion or 63% of all such loans held by the banks operating in Ireland. According to the Central Bank of Ireland, 12.3% of all mortgages held in Ireland were 90 days or more in arrears – some €13.9 billion. Of these, the four State-guaranteed banks had €7.7 billion owner-occupier mortgages in arrears, representing 10.8% of their combined holdings. Given banks’ provisions, by the end of 2012, the expected combined losses on mortgages, can add up to 60% of the total 2011-2013 losses allowed under PCAR.

And this is before we recognise the risks contained in a number of mortgages restructured in 2009-2010 that will come off the forbearance arrangements. Many are likely to go into arrears once again in 2012 and 2013. Recall that the entire Government strategy for dealing with mortgages defaults rests on the extend-and-pretend principle of delaying the recognition of the loss by giving borrowers some relief from repayments, e.g. via interest-only periods. This approach is patently not working.

Taken together with the aforementioned 2010-2011 dynamics, changes to the insolvency regime imply that mortgages losses can exceed Central Bank’s forecasts for 2011-2013 period. Of all four banks, Bank of Ireland remains the healthiest, and the likeliest candidate when it comes to mortgages-related losses. Of course, the banks can continue extending recognition of the losses past 2013, but that will mean no access to non-ECB funding at the time when ECB is increasingly concerned about extending more loans to Irish banks. Worse, with the first LTRO maturing in 2014, Irish banks will be staring into a new funding storm, when their healthier competitors all rush into the markets to fund their exits from LTRO.

Which, of course, means that the entire Government exercise of shoving taxpayers cash into insolvent institutions is unlikely to resolve the crisis. The core banks will continue nursing significant losses well into 2014-2015, with capital buffers remaining strained once potential losses are factored in. And this, in turn, will keep restrained their lending capacity.

Recent Central Bank estimates show that Irish economy will require up to €7 billion in SMEs lending and €9 billion in new mortgages in 2012-2014, while banks are to accelerate deleveraging of their loans books to meet lower loans to deposits standards. At the same time, there will be huge demand for Irish banks lending to the Exchequer, once some €28 billion of Government debt come to mature in 2013-2015. As we have seen with the Promissory Notes ‘deal’, so far, the Government has difficulty getting Irish banking system to buy into Government debt in appreciable amounts.

In other words, we are now staring at the basic conflict inherent in running a zombie banking system that continues to face massive losses on core assets. At the very best, the choice is: either the banks’ will lend to the real economy, while foregoing their support for Exchequer post-2013; or the state uses banking sector resources to cover its own bonds cliff, starving the real economy of credit. The first choice means at least a shot at growth, but the requirement for more EFSF/ESM borrowing (Bailout 2). The second choice means extending domestic recession into 2015.

It is also likely that we will see amplifying politicization of the banking system, with credit allocated to ‘connected’ enterprises and politically prioritized sectors, at the expense of overall economy. Reduced competition – from already below European average levels, judging by the ECB data – will continue to constrain credit supply.

The lesson to be learned from the 2011 full-year results for Irish banks is a simple, but painful one. Banks going through a combination of a severe asset bust and a massive debt overhang crisis are simply not going to survive in their current composition. We need to carry out a structured and orderly shutting down of the insolvent institutions, in particular, IBRC, EBS and PTSB. We also need to restructure AIB. At the same time, we should use the process of liquidation of the insolvent banks to incentivise emergence and development of new service providers.

This can be done by using assets base of the insolvent institution to attract new retail banking players into the market. This process can also involve enhancing the mutual and cooperative lenders models.

Given current funding difficulties, it is hard to imagine any significant uptick in lending in the Irish economy from the traditional banking platforms. Thus, we need to create a set of tax and regulatory incentives and enablers to support new types of lending, such as facilitated direct lending from investors to SMEs. Such models already exist outside Ireland and are gaining market shares around the world, in particular in advanced Asian economies.


The State Guaranteed banking model is, as the 2011 results show, firmly bust. Time to rethink the strategy is now. 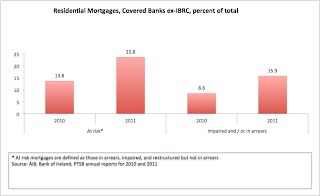 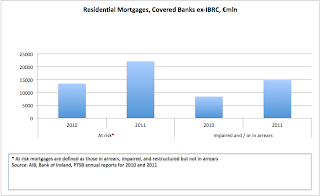 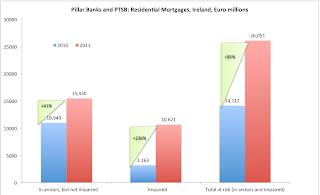 On the positive front, Q1 2012 Exchequer results released this week showed total tax take rising to the levels, not seen since 2009. Total tax revenues came in at €8,722 million, just below €8,792 in 2009. Year on year tax take is up 16.2%. But hold that vintage champagne in the fridge for a moment. Tax revenues for Q1 this year include reclassified USC charges which used to count as departmental receipts instead of tax revenues. The department of Finance does not provide estimates for how much of the income tax receipts is due to this change, but based on 2010 figures it is close to ca €525 mln. They also include €251 million of corporation tax receipts from 2011 that got credited into January 2012 figures. Netting these out, tax revenues are up 8.2% year on year – still appreciable amount, but down 7.6% on 2009. Compared to Q1 2008 – the first year of the crisis, we are still down in terms of tax receipts some 26.2%. Even at the impressive rate of growth, net of one-off changes, achieved in Q1 this year, it will take us through 2017-2018 before we get our tax take to 2007-2008 levels. As the Fianna Fail 2002 election posters used to say “A lot done. More to do.”
Posted by TrueEconomics at 12:40 PM

the stress tests didn't take account of a rise in interest rates to a more normal 5%?!

then the real kicker will come into play

In the US it is commonly accepted that interest only periods etc, only mean paying more, over a longer period, for something that is depreciating, and therefore a no win situation.
It is probably hard to measure the positive effect on the economy of debt forgiveness, where families can spend and save rather than throw money into a black hole. Taxing the forgiveness as income over a long period could make it fair. Given the government's blindspot to growth, it seems the last people to get a break will be distressed homeowners.

'time to rethink this strategy now'.

I think guaranteeing bank deposits had some merit in restoring confidence in the banks. And the bank bailout did its job in recapitilaing the banks.

However while banks may be well capitalised they don't lend existing money.

Banks lend new money to a certain multiple of their reserves. While this brings new money to the economy it brings a corresponding debt. Hence the difficulty of solving the debt crisis.

In rethinking strategies perhaps discussing other ways in which we could create digital money would be helpful.