Wading through some old (relatively) papers, I came across the Cleantech innovation study: “Coming Clean: The Cleantech Global Innovation Index 2012”. The study ranked 38 countries across 15 indicators that relate “to the creation and commercialisation of cleantech start-ups, …measuring each [country] relative potential to produce entrepreneurial start-up companies and commercialise technology innovations over the next 10 years.”

Overall, expectedly, North America and northern Europe “emerge as the primary contributors to the development of innovative cleantech companies, though the Asia Pacific region is following closely behind.” 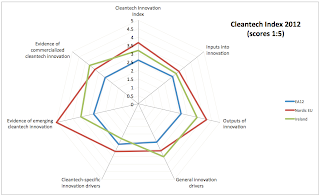 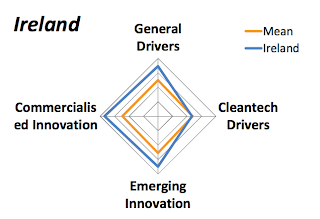 I am not going to pass a judgment on the viability or sustainability of the cleantech activities, but it is clear that the Irish Government continued the rhetoric of prioritizing the ‘Green economy’ ideals it inherited from its predecessor. In this light, how did Ireland score in the cleantech rankings for 2012? It turns out not too bad for a Small Open Economy and that our strong performance is driven by what we are actually good at: selling stuff. Which, in my opinion, risks making this a strong positive in terms of sustainability of cleantech activity.

Per study: ‘Ireland scores especially well on general innovation drivers [e.g. policy and legacy enterprises in innovation-intensive sectors, such as services MNCs and some domestic exporters, but not specific to cleantech] and commercialised cleantech innovation [e.g. MNCs activities], but falls below average on cleantech-specific innovation drivers [e.g. policies supporting innovation in energy and green-IT and IT-for-Green]. Ireland has very strong general innovation inputs, yet lacks public R&D spending, and has only average scores for supportive government policies and access to private finance [which is surprising, given significant VC funds and incubation centres we have deployed via EI and universities system]. Ireland stands out less for emerging cleantech innovation due to its low output of environmental patents and lack of high impact cleantech start-ups. In contrast, the country scores well for commercialised cleantech innovation, with a large percentage of the population working in cleantech, and good numbers for private equity and M&A deals. Ireland falls just ahead of the neighbouring UK.”

Ireland ranks 9th in the world in the global cleantech tables and its scores, compared against peer economies, per categories, are shown below. 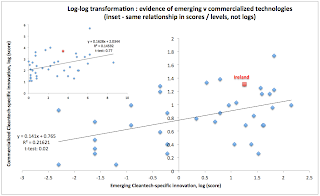 What is revealing, perhaps, is that globally there is only a weak positive relationship between cleantech-specific innovation and commercialized cleantech innovation and in Ireland this relationship is stronger than average. This is most likely due to the more advanced MNCs and exporting base in the Irish economy in general, whereby domestic innovation activities, including those booked by the MNCs into Ireland for tax purposes, is aligned with commercialization via exports. Worldwide, the weak relationship suggests continued non-commercial nature of much of cleantech – serving as a proxy for subsidies dependence of the industry. In which case, Ireland overall is a good stand-out again.

Posted by TrueEconomics at 4:02 PM