Time to update the data for Q1 2012 US Mint gold coins sales - something I have been doing as a sort of an ongoing project.

Much of the downside to the demand was driven by February sales, which run 21,000 oz against March sales of 62,500 oz. 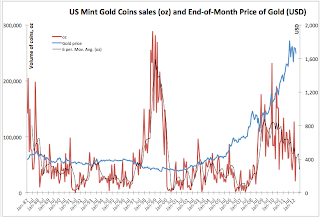 Note that stabilization of the price trend along the flat line above US$1,660/oz since H2 2011 is not associated with establishment of a similarly flat trend for volume of US Mint sales. More on this below, but in basic terms this confirms that the demand for gold coins has little to do with the price in general. In other words, no hysteria and no bubble here. Something other than price movements drives demand for coins.

It is worth noting, that, as consistent with the above observations 6mo MA for volume demand is now at 95,083 oz which is below the March demand of 99,500. Again, no drama - rather mean reversion in the short run. 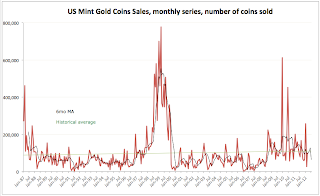 Looking at the two charts above, it is clear that while volume demand is following a pronounced down-sloping trend, coinage demand is relatively flat. Which is consistent with a decrease in average gold content per coin sold. In Q1 2012, average oz/coin sold fell to 0.63 from 0.82 average for Q1 2008-2011. Average weight per coin is down 0.1% in Q1 2012 year on year, and down 37% on Q1 2010 and Q1 2009 (in both of these years, average oz/coin content of US Mint coins sold was 1.0). However, this decline has itself been mean-reverting as the chart below clearly shows. 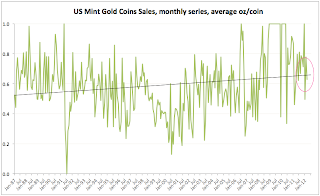 One point to be made in addition to the above is the increased volatility in the series since the mid-2007 through 2010 that is now abating since the beginning of 2011. This reinforces the general historical trend established since 1987.

As mentioned above, correlations between price and volume of gold demanded (via US Mint coinage sales) are now running consistently below the historical trend for some time - primarily since H2 2010. This continues today. The 12mo rolling correlation is negative on-average since July 2010 and this remains the case for Q1 2012. However, Q1 2012 negative correlation is moderate - averaging just -0.05, which is statistically indistinguishable from the Q1 2011 (+0.1) and more moderate than -0.4 correlation for Q1 2010. The average for 12mo rolling correlations for Q1 period over 2000-2007 was +0.18 and during the crisis period it fell to +0.03. With standard deviation of 0.36 none of these correlations suggest any dramatic departures in price-demand relationship from a stable long-term zero correlation trend. Chart below illustrates: 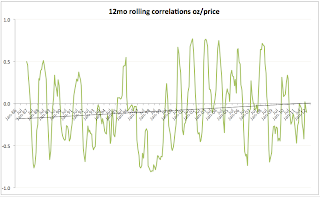 The point that the above adata suggests is best glimpsed by directly relating the levels and the rates of change in gold price and the overall demand for gold via US Mint coins. Both exercises are illustrated below: 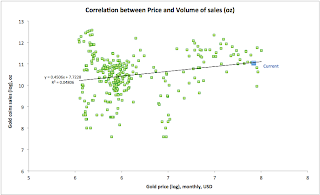 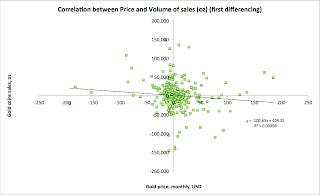 Which means that at least in the case of the US Mint sales, there is no hype, and no madness. What there is instead, is a rather volatile demand with gentle upward slope imposed against a robustly positive exponential relationship in gold price: 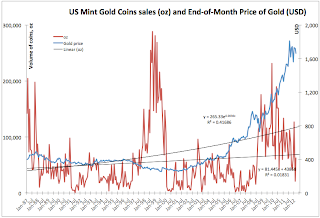 The fact that in recent months demand for gold has been oscillating around the historic trend (as opposed to resting above that trend in August 2008-August 2011 period) is the good news - the current levels of demand are historically sustainable, trend reversion-consistent and show neither hype, nor panic buying.

As I have noted in January post (here): "Welcome back to ‘normalcy’ in US Mint sales." Yep, still holds.


Disclaimer:1) I am a non-executive member of the GoldCore Investment Committee2) I am a Director and Head of Research with St.Columbanus AG, where we do not invest in any specific individual commodity3) I am long gold in fixed amount over at least the last 5 years with my allocation being extremely moderate. I hold no assets linked to gold mining or processing companies.4) I have done and am continuing doing academic work on gold as an asset class, but also on other asset classes. You can see my research on my ssrn page the link to which is provided on this blog front page.

5) Yes, you can find points (1)-(3) disclosed properly and permanently on my public profiles.
6) I receive no compensation for anything that appears on this blog. Never did and not planning to start now either. Everything your read here is my own personal opinion and not the opinion of any of my employers, current, past or future.
Posted by TrueEconomics at 11:01 PM