This is an unedited version of my Sunday Times article from 1/4/2012.

After four years of the crisis, there are four empirical regularities to be learned from Ireland’s economic performance. The first one is that the idea of internal devaluation, aka prices and wages deflation, as the only mechanism to attain debt deleveraging, is not working. The second is that the conventional hypothesis of a V-shaped recovery from the structural crisis, manifested in economic growth collapse, debt overhang and assets bust, is a false one. The third fact is that Troika confidence in our ability to meet ‘targets’ has little to do with the real economic performance. And the fourth is that exports-led recovery is a pipe dream for an economy in which exports growth is driven by FDI.

For anyone with any capacity to comprehend economic reality, Quarterly National Accounts (QNA) results for Q4 2011, showing the second consecutive quarterly contraction in GDP and GNP, should have come as no surprise. In these very pages, months ago I stated that all real indicators – Purchasing Managers indices, retail sales, consumer and producer prices, property prices, industrial turnover figures, banking sector activity, and even our external trade statistics – point South. Yet, the Government continues to believe in Troika reports and statistical aberrations produced by superficial policy and methodological changes.

The longer-range facts about Ireland’s ‘successes’ in managing the crisis, revealed by the QNA, are outright horrifying. In real (inflation-adjusted) terms, in 2011, every sector of Irish economy remains below the pre-crisis peak levels. Agriculture, forestry and fishing is down almost 22%, Industry is down 3%, Distribution, Transport and Communications down 17%, Public Administration and Defence down 6%, Other Services (accounting for over half of our GDP) are down 8%. In Q4 2011, Personal Consumption was 12% below Q4 2007 levels, Gross Domestic Fixed Capital Formation was 57% down on 2007. The only positive side to Irish economic performance compared to pre-crisis levels was Exports of goods and services, which were just 1.2% ahead of Q4 2007 level.

Meanwhile, factor income outflows out of Ireland – profits transfers by the MNCs – were up 19% relative to pre-crisis levels. Despite a rise of 0.7% year on year, Irish GDP expressed in constant prices is still 9.5% below 2007 levels. Our GNP, having contracted 2.53% year on year in 2011, is down an incredible 14.3% on the peak. All in, Irish economy has already lost nine years of growth in this crisis, once inflation is controlled for.

Both the Government and the Troika should be seriously concerned. Taken in combination with accelerating profits transfers out of Ireland by the MNCs, these numbers mean that Irish economy is struggling with mountains of private and public debts that exports cannot deflate.

The immediate lesson for Ireland is that we need serious changes in the economic fundamentals and we need them fast.

First, Ireland needs debt restructuring. We must shed banks-related debts off the households and the Exchequer. In doing this, we need drastic restructuring of the banking sector. Simultaneously, an equally dramatic reform of taxation and spending systems is required to put more incentives and resources into human capital formation and investment. Income tax hikes must be reversed, replaced by a tax on fixed and less productive capital – particularly land. All land, including agricultural. Entrepreneurship-retarding USC system must be altered into a functional unemployment insurance system.

Delivery of health services must be separated from payment for these services, with Government providing the latter for those who cannot afford their own insurance. Private for-profit and non-profit sector should take over delivery of services. Exports-focused private innovation, such as for example International Health Services Centre proposal for remote medicine and ICT-related R&D, should be prioritized.

In education, we need a system of competing universities, colleges and secondary education providers. A combination of open tuition fees plus merit and needs-based grants for domestic students will help. We should incentivise US universities to locate their European campuses here, and shift more of the revenue generation in the third level onto exports. In the secondary education, we need vouchers that will encourage schools competition for students. In post-tertiary education we need to incentivise MNCs to develop their own corporate training programmes and services here.

This will simultaneously expand our skills-intensive exports and provide for better linkages between formal education and, sectoral and business training – something the current system is incapable of delivering.

One core metric we have been sliding on is sector-specific skills. This fact is best illustrated by what is defined as internationally traded services sector, but more broadly incorporates ICT services, creative industries and associated support services.

Eurostat survey of computer skills in the EU27 published this week, ranked Ireland tenth in the EU in terms of the percentage of computing graduates amongst all tertiary graduates. Both, amongst the 16-24 years olds and across the entire adult population we score below the average for the old Euro Area member states in all sub-categories of computer literacy. Only 13% of Irish 16-24 year olds have ever written a computer programme – against 21% Euro area average. Over all survey criteria, taking in the data for 16-24 year old age group, Ireland ranks fourth from the bottom just ahead of Romania, Bulgaria and Italy in terms of our ICT-related skills.

Not surprisingly, at last week’s Digital Ireland Forum 2012 the two core complaints of the new media and ICT services sector leaders were: lack of skills training domestically and draconian restrictions placed on companies ability to import key skills from abroad.

The Irish economy and our society are screaming for real change, not compliance with Troika targets and ego-stoking back-slapping ministerial foreign trips. 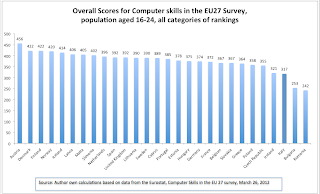 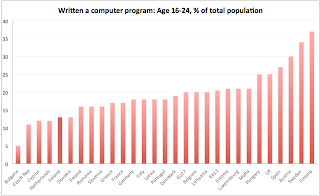 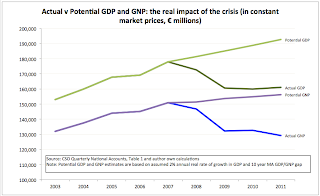 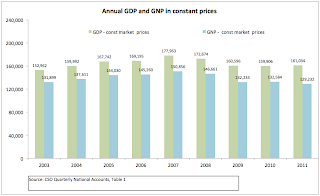 On the foot of my last week’s questions concerning the role of securitizations and covered bonds issuance by the Irish banks in restricting banks’ ability to control the loans assets they hold on their balancesheets, this week’s move by Moody’s Investors Services to downgrade the ratings of RMBS (Residential Mortgage-Backed Securities) notes issued by two of the largest securities pools in the country come as an additional warning. On March 26th, Moody’s reduced ratings on RMBS notes issued by Emerald Mortgages and Kildare Securities on the back of “continued rapid deterioration of the transactions, Moody’s outlook for Irish RMBS sector; and credit quality of key parties to the transactions [re: Irish banks] as well as structural features in place such as amount of available credit enhancement.” The last bit of this statement directly references the concerns with over-collateralization raised in my last week’s note. Although Moody’s do not highlight explicitly the issue of declining pools of collateral further available to shore up security of the asset pools used to back RMBS notes, the language of the note is crystal clear – Irish banks are at risk of running out of assets that can be pledged as collateral. This, of course, perfectly correlates with the lack of suitable collateral for LTRO-2 borrowings from the ECB by the Irish banks, other than the Bank of Ireland last month. As rated by Moody’s, half of the covered RMBS notes were downgraded to ‘very high credit risk’ or below and all the rest, excluding just one, were deemed to deteriorate to ‘high credit risk’ status. Surprisingly, the Central Bank’s Macro-Financial Review published this week makes no mention of either the RMBS, covered bonds or the impact of securitization vehicles on banks’ balance sheets. See no evil, hear no evil?
Posted by TrueEconomics at 7:50 AM

On the procurement reform front, there is much more that can be done than just facilitating prioritisation of spend categories. The entire procurement process needs to shift away from the inefficient practice of scoring tenders. (See below for a short description of how to reduce the effective weighting of the price criterion to near zero).

The lowest cost method can approximate an incentive compatible scheme far better when it is employed in conjunction with pass/fail qualifying criteria. Furthermore, a novel and recent addition to this process involves collecting more price information regarding sub-additive and super-additive costs across multiple lots in a tender. Typically, firms view synergies between lots and this information is vital for engineering significant cost savings. Crucially, this approach can be automated via a software driven approach to bid data collection and thus scaled to provide hundreds of millions of Euro in savings across spend categories. (A UCC start-up I formed called Keelvar is doing just this for the Irish government).

***************
Strategic bidders can easily manipulate a "Most Economically Advantageous Tender". Sister companies of tenderers can all too easily bid for business at a high price. This has the bizarre effect of increasing the range of values over which marks for price are normalised. All prices that are not completely unreasonable are thus compressed into a tight range of marks. The effective weighting for price is, therefore, artificially reduced because uninterested suppliers have spread the range of marks over which tenderers are scored. The tender is then reduced to a beauty contest on qualitative attributes regardless of the official relative weighting of price.

Alan, excellent set of points! So much so, it deserves a post of its own, were I in any way a procurement specialist. Many thanks for the comment.

Hi, great article.
However I find your solutions to our problem limited, I notice you did not address public sector reforms in much detail. You also played down an export led recovery as an only multi national phenomenon. There should be much more help and incentives for small and medium sized Irish companies to export to new and emerging markets.

It may be my ignorance but I would like you to explain your health reform proposals in more detail.
I agree with your proposals on education in relation to IT but we also definitely need a mass effort to promote language development in our schools and universities, with a new
Emphases on “other” languages IE Portuguese, Russian and Chinese.
There are many many changes that have to be made to our economy and society and I hope our government would start with are legal and medical system who members are the best paid in western Europe.