With some delay, this is my article for Sunday Times April 15, 2012 - an unedited version, as usual.

Since 2008, judging by a number of parameters and metrics, Ireland has been firmly in the grip of a historically unprecedented financial, fiscal, banking and economic crises. This is the consensus that emerges from book, titled What if Ireland Defaults? published by Orpen Press last week and edited by myself, Professor Brian Lucey and Dr. Charles Larkin (here is the link to Amazon page for the book and for ebook version). The book brings together views on sovereign and other forms of default by twenty two academic, media, political and social policy thinkers is designed to re-start the debate about the future trajectory of the Irish economy saddled with unprecedented levels of public and private debt. Coincidentally, What if Ireland Defaults? Was published in the same week as the IMF Global Financial Stability Report that focuses on the issues of household debt overhang. The IMF report too stresses the dangers of the excess debt levels across the economy and provides strong argument in favor of a systemic restructuring of private debt in countries like Ireland.

The roots of the Irish debt problem are historical in their nature, not only in the magnitude of the debt overhang involved, but also in terms of the correlated economic, fiscal and financial crises that define our current economic environment.

First, the Irish crisis has resulted in a deep and protracted contraction in the economy that is unparalleled in the modern history of advanced economies. In current market prices terms, and not taking into the account inflation, our national output is down 24.2% on pre-crisis peak, having fallen to 2003 levels. Investment in the economy is down 59.6%. These rates of decline are so far in excess of what has been experienced in Greece and are ten-fold deeper than those experienced in an average cyclical recession.

The duration of the Irish crisis is also outside the historical records. Since Q1 2008, Irish economy recorded fourteen quarters of nominal contraction in GNP and thirteen quarters of contraction in GDP. In effect, the economic crisis has already erased 8 years of growth. At an average nominal rate of growth of 4% per annum, it will take Ireland fifteen years to regain domestic output levels comparable to 2007. And this is without accounting for inflation.

Second, Ireland is now a worldwide record holder when it comes to the cost of dealing with the banking sector crisis. Combined weight of banking sector capital injections, and Nama is now close to 80% of our GNP. Irish Exchequer exposure to the Central Bank of Ireland ELA and the ECB borrowings by the state-owned banks lifts this number well beyond 200% of the national output. No advanced economy has ever experienced such a massive collapse of the domestic banking sector.

Another unique feature of Irish crises is their inter-connected nature. Economic recession – driven originally by the external demand contraction and debt overhang in the domestic economy was further compounded by the asset bust which itself is of a historic proportions. To-date, Irish property markets are down 49.3% on pre-crisis levels and the decline continues unabated. Large numbers of 30-50 year old families – the most economically-productive cohorts of our population – are now deeply in negative equity and are increasingly unable to sustain debt servicing. Officially, over 14% of our entire mortgages are currently either in a default, officially non-performing or short-term restructured.

The property bubble collapse, twinned with the debt crisis, didn’t just undermine the banking sector and cut into household wealth. The two have also left Irish economy without a growth driver that fuelled it since 2001-2002 when the property and lending bubble replaced the dot.com bubble implosion. Put differently, we are witnessing a structural economic recession. Since 1998-1999, Irish economy has lived through one bubble into another. Currently, excessive indebtedness and lack of a functional financial system are leaving Ireland without even a chance of finding a new growth catalyst.

In these conditions, the most significant problem we face today is the debt crisis. Our combined real economic debt – the debts of households, non-financial corporations and the Government – relative to our GNP is the highest in the advanced world. And, unlike our closest competitor for this dubious distinction, Japan, we have no means for controlling the interest rates at which our economy will have to finance Government and private sector debts.

It is the totality of the real economic debts, not just the debt of the Irish Government, that concern those economists who are still capable of facing the economic reality of our collapse. This point is referenced in the What if Ireland Defaults? by a number of authors, and as of this week, their views are being supported by the IMF, the Bank for International Settlements and a growing number of academic economists internationally.

Frustratingly, at home, our views are seen as contrarian, alarmist, and even populist. As the crisis has proven, year after year, the official Ireland Inc is simply unequipped to deal with reality.

Majority of Irish economic analysts incessantly drone about the threats arising from the Exchequer debts. Some, occasionally, add to this the banking debts. Fewer, yet, might reference the households. None, save for a handful of usually marginalized by the establishment economists, bother to treat the entire debt pile carried by our economy as a singular threat.

The silence about Ireland’s total debt, and the ongoing denial of the long-term disastrous economic and social costs of the total debt overhang are the frustrating features of our current state of the nation. It is this frustration, alongside the realization that Ireland can be blindly stumbling toward a renewed debt crisis, that informed myself and two of my co-editors to re-launch the debate about the potential inevitability and consequences of debt restructuring.

To re-start this debate, What if Ireland Defaults presents a range of views on the current Irish situation, from the basis of sovereign, banking debt and household debt restructuring.

The very idea of what constitutes a default is a complex one. In the book we interchangeably use the term ‘default’ as denoting a restructuring of the debt to reduce the overall level of debt. This can be accomplished by reducing the debt level itself, restructuring interest payments, extending the maturity of debt, or any combination of the above. In addition, a default can take place in an relatively orderly and coordinated fashion, as for example in Greece, or as a disorderly, unilateral action, as in the case of Russia in 1998. Lastly, default can be pre-announced, as in the case of Iceland, or unannounced – as in the case of Argentina. All of these differences are reflected in the chapters of the book dealing with historical experiences relating to sovereign defaults.

In the case of Ireland, there is a broad consensus within the book that a sovereign default is neither desirable nor inevitable. In other words, no author sees the situation where Irish Government debt will have to be restructured unilaterally, without prior cooperation with the EU authorities via the ESM or a similar collective structure. However, substantive disagreements do arise among the authors as to whether Ireland will require a structured default on banking and household debts. In this context, some of the contributions to the book pre-date and preclude the research on the necessity of household debt restructuring published by the IMF this week.

The overriding sense from What if Ireland defaults? is of an economy on a knife edge. Given favourable economic circumstances, especially in regard to our exports, a positive change in EU’s political attitudes with regard to the legacy bank debt, and the return of domestic economic growth, the debt levels which Ireland now faces can become sustainable, in that a default on either private or public debts is not probable. However, we cannot consider these developments as guaranteed, and in their absence, restructuring of debts may become inevitable.

In short, both the IMF report this week and the wide range of contributors to What if Ireland Defaults? are in a broad agreement: Ireland should be putting forward systemic policy measures to restructure household (and by a corollary, banking) sector debts. Absent such measures, a combination of the long-term continued growth recession and debt overhang, further compounded by the risks to interest rates and debt financing costs in the medium term future will force us to face the possibility of a sovereign debt default. Avoiding the latter outcome is more than worth the effort of creating a systemic resolution to the household debt crisis. 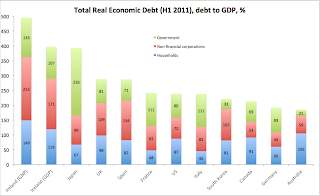 A recently-published Cleantech Global Innovation Index 2012 shows the potential for the development of the green-focused economies in Ireland. The study ranked 38 countries across 15 indicators that relate “to the creation and commercialisation of cleantech start-ups, …measuring each [country] relative potential to produce entrepreneurial start-up companies and commercialise technology innovations over the next 10 years.” Overall, as expected, North America and Northern Europe “emerge as the primary contributors to the development of innovative cleantech companies, though the Asia Pacific region is following closely behind.”

Ireland is ranked ninth in the world in the cleantech league tables and scored strongly on general innovation drivers (underpinned by the presence of innovation-intensive sectors dominated by MNCs and some domestic exporters) and commercialised cleantech innovation (also largely linked to MNCs and a handful of Irish indigenous companies). We fall below average on cleantech-specific innovation drivers, such as policies supporting innovation in energy and green-IT and IT-for-Green. Ireland has only average scores for supportive government policies and access to private finance, which is disappointing.

What the global rankings, and the Irish experience clearly show is that globally there is an extremely weak positive relationship between cleantech-specific innovation and commercialized cleantech innovation. In Ireland this relationship is stronger than average. This is most likely due to the more advanced MNCs and exporting base in the Irish economy in general, whereby domestic innovation activities, including those booked by the MNCs into Ireland for tax purposes, is aligned with commercialization via exports.
Posted by TrueEconomics at 10:36 AM

Hello Constantin et Al, I believe that the philosophies of replicanism (senso stricto) and distributism can be combined to design an overnight hyper-egalitarian quantative easing event which can destroy debt while avoiding state favouritism (which is aristocracy and as such is anti-republican). Last September- during a wet fortnight holidaying in West Cork -I wrote up this idea as a pamphlet which can be read here:

Erratum: Sorry the above comment should have read "republicanism (sensu stricto)" not "replicanism"