In a recent (April 1, 2012) article for the Sunday Times (link here) I wrote about the results of the Eurostat computer skills survey across the EU27 member states. The report this was based on is E-Skills Week 2012: Computer skills in the EU27 in figures (http://eskills-week.ec.europa.eu/).

Quoting from the article:

“One core metric we have been sliding on is sector-specific skills. This fact is best illustrated by what is defined as internationally traded services sector, but more broadly incorporates ICT services, creative industries and associated support services.

Eurostat survey of computer skills in the EU27 published this week, ranked Ireland tenth in the EU in terms of the percentage of computing graduates amongst all tertiary graduates. Both, amongst the 16-24 years olds and across the entire adult population we score below the average for the old Euro Area member states in all sub-categories of computer literacy. Only 13% of Irish 16-24 year olds have ever written a computer programme – against 21% Euro area average. Over all survey criteria, taking in the data for 16-24 year old age group, Ireland ranks fourth from the bottom just ahead of Romania, Bulgaria and Italy in terms of our ICT-related skills.”

So here are the details of my analysis of the Eurostat data. Note, ranks reference EU27, plus Norway, Iceland and 3 averages treated as countries – EA12 (old euro area states), EU27 and Small Open Economies of EU27. In other words, ranks are reported out of 29 countries and 3 averages.

In terms of the overall proportion of computer graduates amongst all graduates, Ireland performs close to the mid-range of the overall EU27 distribution. In 2005, 2.9% of graduates were in CS disciplines against the EU27 average of 4% and EA12 (old euro area) average of 4.12%. By 2009 this number rose to 3.8% for Ireland, and fallen to 3.4% for EU27 and 3.37% for EA12. However, the averages conceal rather wide dispersion of scores across both the EU27 and EA12. Ireland’s overall performance in this category ranked 12th in 2009 data, below Greece, Spain, Malta, Austria, UK and Norway. 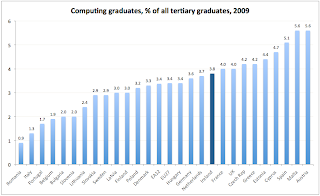 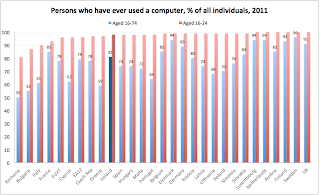 Now, we should expect a generational effect of higher (statistically) percentage for those of 16-24 years of age. And the gap appears to be present in the case of Ireland – 17 percentage points spread. The gap is consistent with the EU27 and EA12 averages of 18 and 17.8 percentage points. In other words, Ireland’s population computer usage is not exactly stellar to begin with and is not improving at a faster pace than European average with generations.

The survey also assessed what percentage of relevant population used basic arithmetic formulas in a spreadsheet. For EU27 and EA12 the corresponding percentages were: for cohort aged 16-24: 66% and 67% respectively. For Ireland the percentage was 54%, assigning to us rank 30th in the sample, with only Romania and Bulgaria scoring below us. For the full population (16-74 years of age), the EU27 and EA12 averages were 43% and 45.5% respectively, while for Ireland the corresponding percentage was 44%. Again, our inter-generational gap was lower than average either for EA12 or EU27, suggesting that not only we are extremely poorly scoring in this category as a whole, but that our inter-generational change in skills is working against us in comparison to the averages. 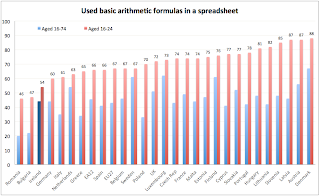 As per percentage of those who created electronic presentations, for EU27 and EA12 the averages were 59% and 63.1% for cohort of those aged 16-24 against Ireland’s 36%, earning Ireland 30th rank, ahead of only Bulgaria and Romania. The inter-generational gap for EU27 is 28 percentage points, while for EA12 it was 28.5 percentage points and for Ireland 15 percentage points. Again, we are falling behind and doing so from the weak position to begin with. 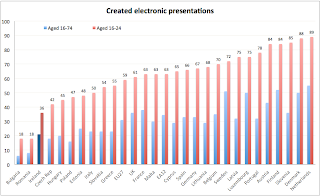 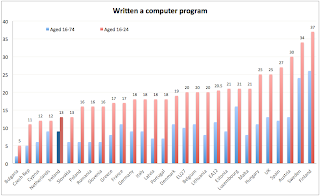 In terms of overall score for the younger cohort of 16-24 year olds (summing up percentages for all categories, plus third level CS education proportion multiplied by factor 10), Ireland total score comes in at 321, well below the total score for EA12 (368.5) and EU27 (365). Ireland ranks 28th in the league table in terms of overall computer literacy score, ahead of only Bulgaria, Italy, and Romania. In summing up all ranks, Ireland’s combined rank is 148 against 120 for EA12 and for EU27. 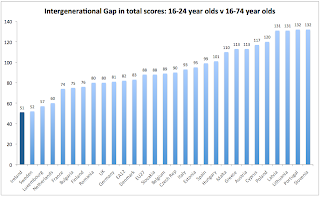 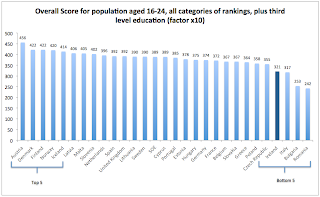 In the last chart above, higher gap signals more advanced skills for the younger cohort compared to general population: Ireland has low rank and low gap, implying that younger cohort skills are advancing at a slower speed than in other countries from already low skills base. In contrast, Finland has relatively low gap combined with high overall rank, implying that Finland's younger cohorts have faster than in Ireland rate of growth in skills compared to much higher overall level of skills already in place for the general population. Slovenia and Latvia are examples of countries where skills are relatively high for the younger cohorts compared to other countries and are growing fast compared to older cohorts.
Posted by TrueEconomics at 12:53 PM

I am one of your ex-management students at UCD.
My background is ICT and while building a career towards management, I am considering to further my financial knowledge.

Due to your position in industry and academia, what is your view on pursuing such studies ? Do you think that an msc in finance would have good prospects ?

My intention is to stay working inside the ICT industry -that I know-.

Thanks very much for reading this and also say thanks for such interesting lectures during last year!

I hope you are keeping well.

email me - we shall talk!