This is an edited version of my Sunday Times article from January 29, 2012.

In a recent Annual Demographia International Housing Affordability Survey of 325 major metropolitan areas in Australia, Canada, Hong Kong, Ireland, United Kingdom and the United States, Dublin was ranked 10th in the world in terms of house prices affordability. The core conjecture put forward in the survey is that Dublin market is characterized by the ratio of the median house price divided by gross [before tax] annual median household income of around 3.4, a ratio consistent in international methodology with moderately unaffordable housing environments.

Keep in mind, the above multiple, assuming the median household income reflects current unemployment rates and labour force changes, puts median price of a house in Dublin today at around €175,000 – quite a bit off the €195,000 average price implied by the latest CSO statistics. But never mind the numbers, there are even bigger problems with the survey conclusions.

While international rankings do serve some purpose, on the ground they mean absolutely nothing, contributing only a momentary feel-good sensation for the embattled real estate agents. In the real world, the very concept of ‘affordability’ in the Irish property market is an irrelevant archaism of the era passed when flipping ever more expensive real estate was called wealth creation.

What matters today and in years ahead are the household expectations about the future disposable after-tax incomes in terms of the security and actual levels of earnings, stability of policies relating to household taxation, plus the demographic dynamics. None of these offer much hope for the medium-term (3-5 years) future when it comes to property prices.

Household earnings are continuing to decline in real terms (adjusting for inflation) in line with the economy. The CSO-reported average weekly earnings fell 1.2% year on year in Q3 2011 once consumer inflation is take out. But the average earnings changes conceal two other trends in the workforce that have material impact on the demand for property.

Firstly, reported earnings are artificially inflated because the workforce on average is becoming older. Here’s how this works. Younger workers and employees with shorter job tenure also tend to be lower-paid, and are cheaper to lay off. Thus, the rise in unemployment, alongside with the declines in overall workforce participation, act to increase average earnings reported. This explains why, for example, average weekly earnings in construction sector rose 2.5% in Q3 2011 year on year, while employment in the same sector fell 4.1% over the same period. This means that fewer potential first-time buyers of property are having jobs, and at the same time as the existent workers are not enjoying real increases in earnings that would allow them to trade up in the property markets.

Secondly, the real world, rising costs across the consumer expenditure basket, further reducing purchasing power of households, is compounded by the composition of these costs. One of the largest categories in household consumption basket for those in the market to purchase a home is mortgage interest. This cost is divorced, in the case of Ireland, from the demand and supply forces in the property markets and is influenced instead by the credit market conditions. In other words, the 14.1% increase in mortgage interest costs in the 12 months through December 2011, once weighted by the relative importance of this line of expenditure in total consumption is likely to translate into a 2-3% deterioration in the total after-tax disposable income of the average household that represents potential purchaser of residential property.

And then there are effects of tax policies on disposable income. One simple fact illustrates the change in households’ ability to finance purchases of property in recent years: between 2007 and 2011 the overall burden of state taxation has shifted dramatically onto the shoulders of ordinary households. In 2007, approximately 46% of total tax collected in the state came directly out of the household incomes and expenditures. In 2011 the same number was 58%.

The above factors reference the current levels of income, cost of living and tax changes and have a direct impact on demand for property in terms of real affordability. In addition, however, the uncertain nature of future economic and fiscal environments in Ireland represents additional set of forces that keep the property market on the downward trajectory. For example, in Q3 2011 there were a total of 116,900 fewer people in employment in Ireland compared to Q3 2009. However, of these, 113,700 came from under 34 years of age cohort. Unemployment rate for this category of workers, comprising majority of would-be house buyers, is now 20.4% and still rising, not falling. Given the long-term nature of much of our current unemployment, no one in the country expects employment and income growth to bring these workers back into the property markets for at least 3 years or longer. Without them coming back, only those who are trading down into the later age of retirement are currently selling, plus those who find themselves in a financial distress.

Tax uncertainty further compounds the problem of risks relating to unemployment and future expected incomes. Government projections that in 2013-2015 fiscal adjustments will involve raising taxes by €3.1 billion against achieving current spending savings of €4.9 billion are rightly seen as largely incredulous, given the poor record in cutting current spending to-date. Thus, in addition to already draconian pre-announced tax hikes, Irish households rationally expect at least a significant share of so-called current expenditure ‘cuts’ to be passed onto households via indirect taxation and cost of living increases.

This, of course, brings us to the projections for the near-term future. The latest CSO data for the Residential Property Price Index released this week shows that nationwide, property prices were down 16.7% in December 2011 compared against December 2010. Linked to the peak prices as recorded by the now defunct PTSB-ESRI Index, the latest CSO figures imply that nationally, residential property prices have fallen from the peak of €313,998 in February 2007 to ca €166,000 today (down 47% on peak). In Dublin, peak-level average prices of €431,016 – recorded back in April 2007 – are now down to close to €195,000 (almost 55% off peak).

Using monthly trends for the last 4 years, and adjusting for quarterly changes in average earnings and unemployment, we can expect the residential property price index to fall 11-12% across all properties in 2012. Houses nationwide are forecast to fall in price some 12-14% - broadly in line with last year’s declines, while apartments are expected to fall 11-12% year on year in 2012, slightly moderating the 16.4% annual fall in 2011.

More crucially, even once the bottom is reached, which, assuming no further material deterioration in the economy, can happen in H2 2012 to H1 2013, the recovery will be L-shaped with at least 2-3 years of property prices bouncing along the flat trendline at the bottom of the price correction. After that, return toward longer-term equilibrium will require another 1-2 years. Assuming no new recessions or crises between now and then, by 2015-2016 we will be back at the levels of prices recorded in 2010-2011. Between now and then, there will be plenty more reports about improving affordability of housing in Ireland and articles about the proverbial foreign investors kicking tyres around South Dublin realtors’ offices. 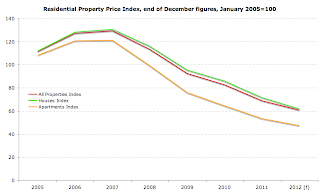 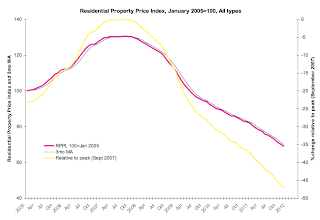 Source: CSO and author own forecast

Box-out:
Ireland’s latest shenanigans in the theatre of absurd is the fabled ‘return to the bond markets’ with this week’s swap of the 2 year 4.0% coupon Government bond for a 4.5% coupon 3-year bond. The NTMA move means we will be paying more for the privilege to somewhat reduce the overall massive debt pile maturing in 2014, just when the current Troika ‘bailout’ runs out. So in effect, this week’s swap is a de fact admission by the state that Ireland has a snowball’s chance in hell raising the funding required to roll over even existent debt in 2014 through the markets. Which, of course, is an improvement on the constant droning from our political leaders about Ireland ‘not needing a second bailout’. Of course, as far as our ‘return to the markets’ goes – no new debt has been issued, no new cost of financing the state deficits has been established in this swap. The whole event is a bit of a clock made out of jelly – little on substance, massive on PR, and laughable from the functionality perspective.
Posted by TrueEconomics at 1:06 PM

Good to see expectations being accounted for in all of this.

Interesting note on the extent to which mortgage interest repayments are impacting on the cpi for mortgage holders. The weights are currently based on December 2006 so we rely on fairly crude estimations. New weights will soon be adopted based upon the 2010/2011Household Budget Survey and these should be more reliable. It is pretty clear however, that recent changes in mortgage interest rates have been the main driver of the cpi growth for mortgage-holders.