This week’s announcement by the Government that the Irish banks will be issuing loans to small and medium sized enterprises (the SMEs) under the cover of a sovereign guarantee has raised some eyebrows.

Throughout the persistent lobbying to underwrite credit supply to the struggling SMEs, it was generally resisted by the majority of economists and analysts, who argued that the Irish state is in no financial or fiscal position to provide such a measure. Having backed banks’ debts via the original 2008 State guarantee and emergency loans from the Central Bank of Ireland by the letter of comfort, the Irish state had also underwritten the risks associated with the commercial real estate development and investment assets through Nama. In addition, via rent supplements and mortgage interest supports, the government is propping up a small share of other banks assets and the rental markets.

Per Central Bank’s own stress tests, estimated worst-case scenario defaults on all assets in the core Guaranteed banking institutions are expected to run at around 14.6%. SMEs loans had the worst-case scenario default rate estimate of 19%. We can argue as to the validity of the above estimates, but much of the international evidence on lending risks suggest that SMEs loans are some of the riskiest assets a bank can have. Add to this that we are in the depth of the gravest recession faced by any euro area country to-date, including Greece and you get the picture. Without state backing, there will be no lending to smaller firms. With the state guarantee, there will be none, still.

Subsidizing risker loans in the banks that are scrambling to deleverage their balancesheets, struggling with negative margins on their tracker mortgages and facing continued massive losses on loans might be a politically expedients short-term thing to do. Financially, it is hard to see how the Irish banking system crippled by the crisis and facing bleak ‘recovery’ prospects in years ahead can sustain any new lending to the SMEs.

Top level data on Government Guaranteed banks, provided by the Central Bank of Ireland, shows that in 2011, loans to Irish residents have fallen by €63.25 billion on 19% with €30.3 billion of this decline coming from the non-financial private sector – corporate, SME and household – loans. Loans to non-residents are down €40.9 billion or 29%.

The Government spokespeople are keen on pushing forward an argument that in recent months the numbers are starting to show stabilization. Alas, loans to Irish residents outstanding on the books of the guaranteed banks are down 7% for the last three months of 2011 compared to the third quarter of the same year. All of this deterioration is accounted for by losses in private sector loans which have fallen €21.7 billion or 12% in Q4 2011 compared to Q3 2011. Deposits from Irish residents are up €2.04 billion or 1% over the same period, due to inter-banks deposits rising €2.3 billion, while private sector deposits are down €384 million.

The ‘best capitalized banks in Europe’ – as our Government describes them – are not getting any healthier when it comes to core financial system performance parameters. Instead, they are simply getting worse at a slower pace.

The outlook is bleaker yet when one considers top-level risk metrics for the domestic banking sector. On the books of the Covered Banks, domestic private non-financial sector deposits are currently one and a half times greater than all foreign deposits combined. On the other side of the balancesheet, ratio of assets issued against domestic residents to assets issued against foreign residents now stands at 159% - the highest since December 2004. Again, this means that banks balancesheets are becoming more, not less, dependent on domestic deposits and assets, which in turn means more, not less risk concentration.

This absurdity passes for the State banking sector reforms strategy that force Irish banks to unload often better performing and more financially sound overseas investments in a misguided desire to pigeonhole our Pillar Banks into becoming sub-regional players in the internal domestic economy. In time, this will act to reduce banks ability to raise external funding and, thus, their future lending capacity.

Aptly, the latest trends clearly suggest increasing concentration and lower competition in the sector across Ireland. While ECB only reports a direct measure of market concentration (or monopolization) for the banking sector through 2010, the trends from 1997 reveal several disturbing facts about our domestic banking. Firstly, contrary to the popular perspective, competition in Irish banking did not increase during the bubble years. Herfindahl Index – the measure of the degree of market concentration – for banking sector in Ireland remained static at 0.05 in 1999-2001, rising to 0.06 in 2002-2006, and to 0.09 in 2009-2010. Secondly, back in 2010, our banking services had lower degree of competition than Austria, Germany, Spain, France, UK, Italy, Luxembourg, and Sweden. On average, during the crisis, market concentration across the EU banking sector rose by 8% according to the ECB data. In Ireland, this increase was 29% - the fastest in the euro area. Lastly, the data above does not reflect rapid unwinding of foreign banks operations in Ireland during 2011, or the emerging duopoly structure of the two Pillar banks.

Meanwhile, the banks continue to nurse yet-to-be recognized losses on household, SMEs and corporate loans as recent revision of the personal bankruptcy code induced massive uncertainty on risk pricing for mortgages at risk of default. In addition, Nama constantly changing plans to offer delayed repayment loans and mortgages protection, destabilizing banks risk assessments relating to existent and new mortgages, property-related and secured loans. The promissory notes structure itself pushes the IBRC to postpone as much as possible the winding up process.

To summarize, evidence suggests that seven months after the Exchequer completed a €62.9 billion recapitalization of the Irish banks, our banking system is yet to see the light at the end of the proverbial tunnel. Far from being ready to lend into the real economy, Irish banks continue to shrink their balancesheets and struggle to raise deposits. Their funding profile remains coupled with the ECB and Central Bank of Ireland repo operations – a situation that has improved slightly in the last couple of months, but is likely to deteriorate once again as ECB launches second round of the long term refinancing operations at the end of this month. In short, our banking is still overshadowed by the zombie AIB, IL&P, and IBRC.

Let’s hope Bank of Ireland, reporting next week, provides a ray of hope. Otherwise, the latest Government guarantees scheme can become a risky pipe dream – good for some short-term PR, irrelevant to the long-term health of the private sector and damaging to the Exchequer risk profile. 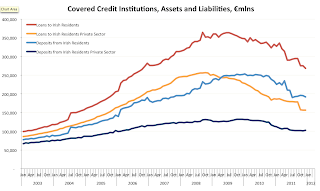 This week, Minister Richard Bruton, T.D. has made a rather strange claim. Speaking to RTÉ's News, Mr Bruton said that last year's jobs budget had created 6,000 jobs in the hotel and restaurant sector. Alas, per CSO’s Quarterly National Household Survey, the official source of data on sectoral employment levels in Ireland, seasonally adjusted employment in the Accommodation and food service activities sector stood at 119,100 in Q3 2009, falling to 118,200 in Q3 2010 and to 109,700 in Q3 2011. While jobs losses in 12 months through Q3 2011 – the latest for which data is available – were incurred prior to June 2011 when the VAT cuts and PRSI reductions Minister Bruton was referring to were enacted. But even if we were to look at seasonally adjusted quarterly changes in hotel and restaurant sector employment levels, the gains in Q3 2011 were a modest 1,400 not 6,000 claimed by the Minister. In reality, any assessment of the Jobs Programme announced back in May 2010 will require much more data than just one quarter so far reported by the CSO. That, plus a more careful reading of the data by those briefing the Minister.

Posted by TrueEconomics at 8:38 AM

Thanks for this analysis, Constantin.