The Central bank of Ireland has published Q4 2011 stats for mortgages arrears. And it's a trend-breaking one. Not quite touching my forecast from Q3 2011 data for 114,000 mortgages at risk (see definition below), but jaw-dropping 108,603 and counting mortgages that were written off since Q34 2010 when more detailed records were first published - closer to 102,200.

Now, let me run through the core details of the data. 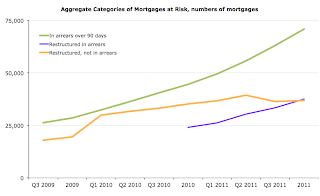 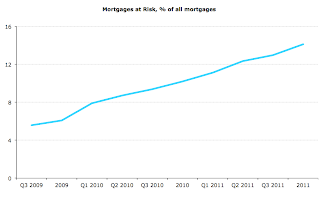 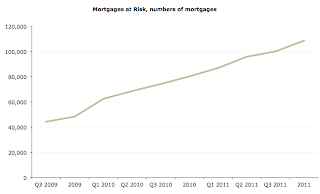 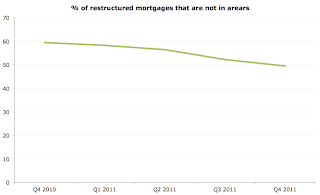 Now, do keep in mind that restructuring was quite severe in many cases. See bottom of CBofI release on this here. And it doesn't seem to work all too well for just over 50% of those entering new temporary arrangements. So what will happen to these families when the 'temporary' arrangements expire?
Posted by TrueEconomics at 10:36 PM

that will teach these people a lesson for paying too much for the houses.

You double counted a tad in arriving @ 12.29 % Constantin. However there is no data on CONTRACTUAL payment holidays and CONTRACTUAL IO periods..only on disorderly ones. Have you thought of asking

Wow. such an insightful and helpful comment. No wonder you left it "Anonymous".

Where did I double count?

Mortgage arrears for rescheduled mortgages are alrready included in the headline figure. The number is nearer 10%...see Note 11 to the figures..

However this is of no import as I pointe out the "Contractual" issue meaning the actual figure is higher than 12.29% ANYWAY and here is why.

1. Most mortgages taken out post 2000 come with CONTRACTUAL holidays. EG within the contractual terms one may take a complete payment holiday of 3-12 months and one may (often additionally) take an IO period of up to 12 months. If the mortgage owner has not availed of these terms they are applied retroactively by banks when the mortgage first goes into arrears an therefore not reported.

2. Mortgages rescheduled and not subsequently in 90 day arrears are counted as performing. This is crazy...they had their chance and blew it.

3. Spot defaults, eg missing 1 month in 12 over 3 years are not counted as 90 days in arrears. The 90 days missed must occur within 2 years and a 1 month default over 24 months old rolls off the figures even if is not made back up plus outstanding interest.

See if you can get the Central Bank to account accurately for those or perhaps add a Note or 3 to clarify. Might take a while. :)

I only include in the above mortgages that were restructured but are NOT in arrears, so no double counting.

Mortgages in arrears for 180 days is half a year - just when do repossessions for unpaid mortgages take place if not after 6 months - how long until considered a repossession?