In Part 1 (here) I raised couple of specific points concerning the latest official claims over Irish Exchequer returns for December. Here, I follow up on the first point raised earlier and then post on longer term trends in Government spending, including my forecasts for fiscal performance in 2011-2014.

First, relating to the point raised in yesterday's post: Minister Lenihan stated that
"On the spending side, overall net voted expenditure at €46.4 billion was over €700 million below the level recorded in 2009, reflecting the ongoing tight control of public spending. While day-to-day spending was marginally ahead of target in the year, this is due to a shortfall in Departmental receipts rather than overruns in spending."

As I outlined earlier, I beg to disagree with the Minister on the claim of 'tight control'. Let me add to the reasons for my disagreement:
This implies that the Exchequer deficit was:
And thus Minister Lenihan's tightly controlled public spending measures in 2010 have managed to increase Government deficit by €1,104m on 2009 levels.


Next, let's take a look at the annual data for Irish Exchequer over the recent years, incorporating latest release.

First, receipts v expenditure over time - for 1983-2011 and on with my forecasts. All data is annual: 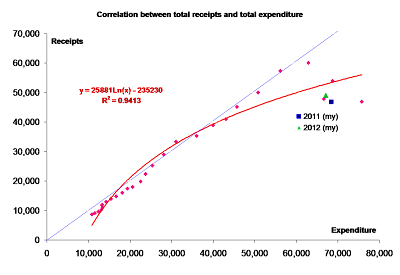 Notice that with exception of 3 points - all observations fall to the right and below the 45 degree blue line. Also notice that the trend over time has been toward greater excess expenditure. Overall, however, 'when I have it, I spend it' relationship really does hold - the RSq is high 0.9413.

Latest figures show that in 2010 the Government has savaged capital investment side of its balancesheet and failed to curb current spending. This too is consistent with long term trends: 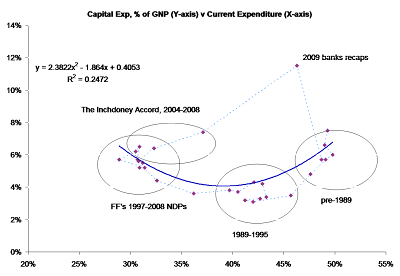 The age of Brian Cowen 'stimulus' (remember - he did say that we are going to have recession stimulus in the form of large capital investment) is now over and, despite Minister Lenihan's claims that we are not in the 1980s... guess what - 2010 we landed right into pre-1989 era.

Lastly, on to forecasts for the future: 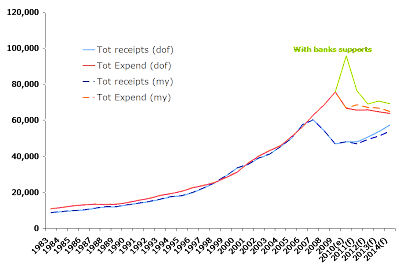 Above chart clearly shows why I am with the IMF on the deficit outlook for 2014, and not with the Government. Apart from slightly higher total expenditure outlook than that of DofF, I expect slightly lower tax take and non-tax returns, but then I also expect the remaining costs of banks and subsequent increased interest repayment burdens to come due in 2011-2014 as well.
Posted by TrueEconomics at 6:25 PM

Excellent work Constantin but if you live in a Dictatorship what can you do..

Who will tell those who voted for these jokers?

The newspapers ignore this truth?

The pain is just beginning and will last a decade at least. The recovery may begin, depending on the rest of the world and the IFSC ...... That is so well regulated that the clowns could not possibly cause further damage to Ireland, could they?

Trouble is, we will only find out figures when they are released ..... afterwards!

voted departmental expenditure, net of 2.7bn in increased social welfare costs due to unemployment, hardship etc, was down 3.4bn.

interest costs on the national debt was up by 1.55bn.

You neglect to mention the 725mn in capital which was provided to EBS and INBS and IS included in the deficit figures.

Not entirely sure how, save a banking liquidation which is an argument for another day, the Minister can be expected to have much control over those interest, social welfare and bank capital dynamics. Netting those out gives a reduction in the deficit of 3,825bn. Even if you want to also net out the fees earned from the bank guarantees (1.33bn) and you are left with a decrease in the deficit of 2.5bn.