Latest data for Ireland's external trade in goods was released yesterday, showing another month of spectacular trade balance performance in Ireland, albeit with a slight easing in month-on-month activity.
The value of exports in November 2010 rose robust 17% year on year while the value of imports was up by 2%. The trade surplus increased by a spectacular 37% to €4,086mln, marking a third consecutive month when the trade surplus exceeded €4bn. However, seasonally adjusted exports fell 1% in November mom, as did imports, leaving seasonally adjusted trade balance virtually unchanged.

The main drivers of trade balance in the first 10 months of 2010, compared against the same period of 2009 were:
Now to updated charts showing the above dynamics: 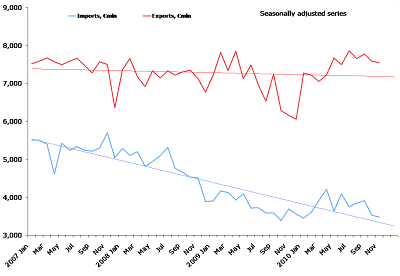 Headline series show two trends - a relatively flat trend (though down-sloping slightly) in exports and a robustly negative trend in imports. Exports and imports in the short run are still performing above the trend and the persistence of performance suggests that the trend is likely to reverse onto positive in exports and flatten out in imports. While continuing to signal strong performance in trade surplus, the trend suggests that future growth in trade balance might be moderating in months to come. 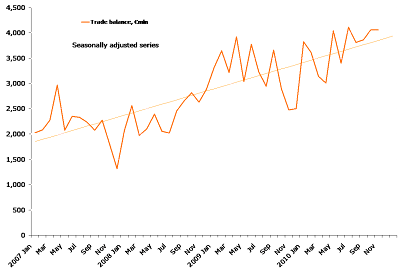 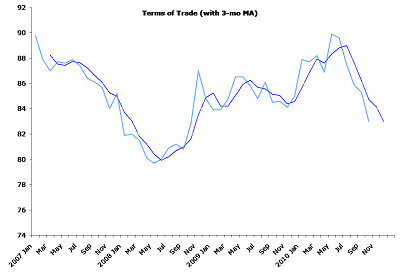 Chart above clearly highlights an emerging problem of deteriorating terms of trade (ratio of exports prices to imports prices). This process has been on-going and is now starting to present a major headwind for exporters.

That said, due to a heavy exposure of our trade to MNCs, volumes of trade have little relationship with the short and medium term pressures on terms of trade: 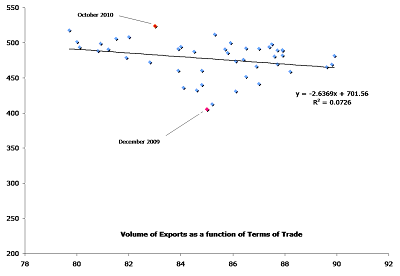 The above suggests that the headwinds will be strongly felt by domestic exporters.

A summary of cumulative changes in exports and trade surplus in 2010 relative to 2007:

Notice weakening performance (relative to pre-crisis conditions) in October and November - something to watch.
Posted by TrueEconomics at 3:11 PM

Are the decline in petroleum imports just related to drops in employment, or is there another reason? e.g. rising cost curbing demand? something else?