Corrected - hat tip for an error to Seamus Coffey.


In Part 1 of the post on 2010 Exchequer returns I looked at a couple of headline points relating to the issue of Ireland's fiscal policy performance in 2010 (here). Part 2 of the post dealt with my forecasts and longer term analysis of fiscal environment in Ireland (here). Part 3 focused on the expenditure side of the Government balancesheet (here).

In this part, let's tackle the issues relating to tax receipts. 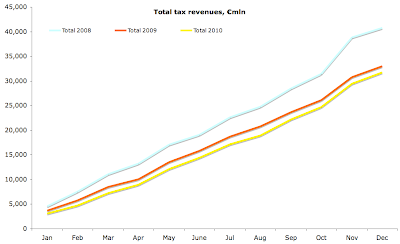 As the chart above clearly shows, the idea of 'stabilizing' tax revenue relates to the Government view that replicating previous year performance - albeit at a slightly lower levels - is somehow a good thing.

Amazingly, 2010 absolute underperformance of the already abysmal 2009 comes after a host of tax hikes and levies introductions by the Budgets 2009 and 2010. Minister Lenihan has been pushing ever increasing tax burden onto the Irish economy, while getting less and less revenue in return. 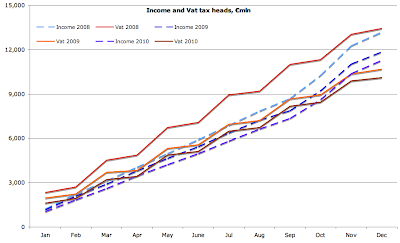 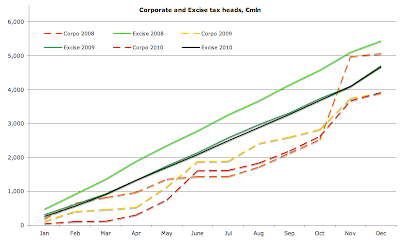 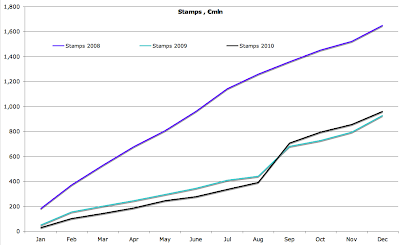 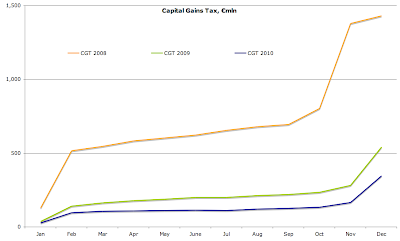 Of course, CGT is a reflection of economy's performance on investment side. Here, there is clearly no recovery in sight. 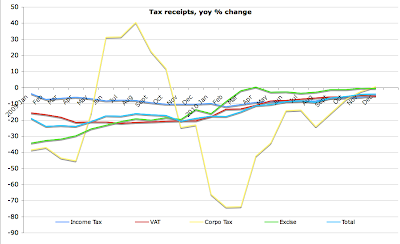 One thing that remains stable throughout the crisis is Government's determination to load the burden of fiscal adjustment onto ordinary taxpayers: 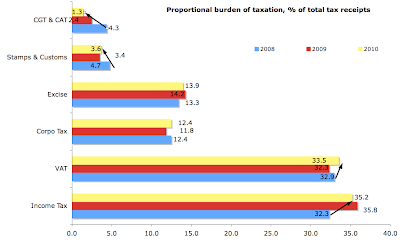 Table below summarizes the above point:

And, for conclusion, let's indulge in the Government's own fetish of focusing on performance relative to target (not that there is much of an economic meaning to this): 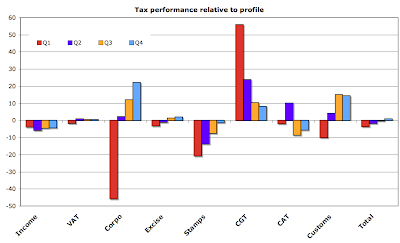 Posted by TrueEconomics at 8:23 AM

Interesting spikes in stamp duty and CGT at end 2008 just after guarantee. Indication of a massive liquidation of assets? Wonder where all the cash went?

There's something a bit hooky about your tax revenue graphs. The patterns are slightly different to ones I have illustrated.

I think it may be because some 2007 numbers got caught up in the mix even though your graphs are for the 2008-2010 period. I think it is the last datapoint in the 2008 series that is gone a bit quirky.

Exchequer tax revenue was about €40 billion in 2008 but yours goes north of €45 billion. Income Tax for 2008 was almost identical to the 2007 level so hard to spot anything here. December isn't a key VAT much so there should be a "flat step" in the series. The 2008 VAT line continues upward (likely to meeet the 2007 total). The same with December 2008 values for Corporation Tax, Stamps and CGT.

In relation to the previous comment (and noting the above): There was no jump in Stamp Duty in late 2008. It was flatlining! The apparent jump in Capital Gains Tax is simply down to the tax code that sees most CGT due for payment in November. CGT in 2008 was down huegly on CGT in 2007.

It would be interesting to devote some attention to the private sector component of income tax revenues.

The state is borrowing 20bn euro/year to fund the public sector which neatly - but artificially - inflates (further) our GDP figure. I'm guessing private sector income tax revenues are no more than 8 billion euro, which makes an interesting benchmark for the nation's debt-servicing ability.

Anonymous.
Sorry to burst your bubble, but CGT etc only becomes payable months after the year in which the event occurs, giving rise to the gain.
It probably illustrates the successful offloading of assets onto indebted borrowers, the last gasp of the bubble economy.
Those who saw all this coming are sensible enough to get out way too early, before the top. Sellers remorse at not extracting the last euro is small compared to being suckered into a credit bust with max loans.
The bubble was obvious to a lot of us. Why the government persisted in promoting the banks is quite beyond me. Crooked and stupid but surely even then .... ?