Starting with 20/11/2020, the U.S. once again overtaken the EU27 in the number of daily reported cases, based on 7-days moving average: 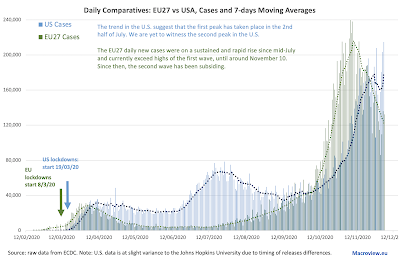 The data above is yet to reflect massive potential contagion event of Thanksgiving travel in the U.S. and the related movements of students from and back to the colleges and universities that allowed in-person teaching in the Fall 2020 semester.
Shorter lags between contagion and diagnosis of COVID19 cases imply longer lags between new cases arrivals and hospitalisations, which in turn further elongates the lags between new cases detection and associated deaths counts. This is clearly evident from comparing the following figure dynamics with prior figure dynamics: 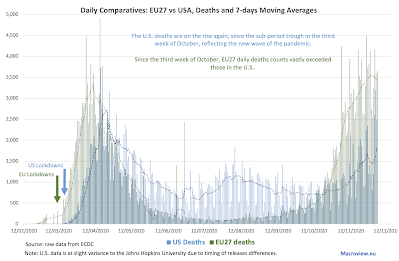 Put differently, current better performance by the U.S. compared to the EU27 in the second wave of the pandemic in terms of daily deaths counts is unlikely to remain for much longer. EU27 daily deaths trend appears to have peaked about a week ago, while the U.S. deaths trend remains upward-running.
Little comfort for the wicked... right? 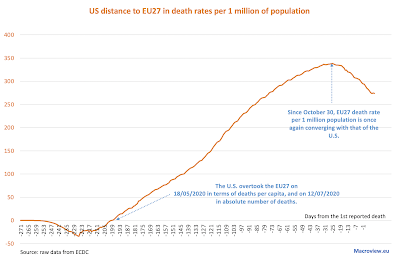 As the chart above shows, even with more favourable deaths dynamics during the current wave of the pandemic, the U.S. deaths per capita remain horrifically above those in the EU27. Worse, over the last four days, we are seeing some tentative signs that the EU27 daily deaths counts might be moderating. Meanwhile, the opposite is taking place in the U.S.
Posted by TrueEconomics at 3:32 AM