In the first post (see above) looking at the broader measures of unemployment and dependency ratios, recall that CSO publishes several extended series for broader unemployment rates.

The official unemployment rate at 1Q 2018 stood at 6.4 percent (well within the pre-crisis historical range of the average of 5.31 percent and the 99% confidence interval of (3.70%, 6.92%). In more simple terms, statistically, the current official unemployment rate is indistinguishable from the average rate prevailing in 1Q 1998 - 4Q 2007. Which is the good thing, implying that in official terms, Irelands economy has recovered from the crisis at last. In fact, the recovery in official terms has been attained in 4Q 2017.

However, the CSO also reports the PLS2 measure of broader unemployment. The Above analysis was based on reported PLS1 data, covering unemployed plus discouraged workers, as a percentage of the labour force. Adding to the PLS1 those in potential additional labour force (basically able bodied adults who are neither employed nor unemployed, nor discouraged, and are not in studies or formal training), the CSO gets PLS2 measure of broader unemployment. In 1Q 208 this number read 10.2% of the Labour Force, plus Potential Additional Labour Force, which was statistically higher than the pre-Crisis average of 6.1% (falling into the 99% confidence interval range of (4.39%, 7.81%). In other words, the economy has not yet recovered from the Crisis based on PLS2 broader unemployment measure.

As noted above, by two broader unemployment measures: PS2 and PLS3, Irish economy has not recovered from the crisis, even if we take a relatively benign recovery measure of the economy reaching the pre-crisis 1Q 1998 - 4Q 2007 average rate of unemployment. 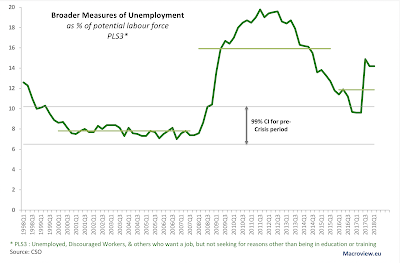 Worse, taking 4 year moving average and a 4 year rolling standard deviation in PS3 rates, 1Q 2018 PLS3 rate of 14.2% is closer to the upper margin of the 99% confidence interval for 1Q 2018 based on prior 4 years of data (the CI is given by (9.81%, 15.63%) range). Which means that 1Q 2018 data shows no statistically significant break-out from the PLS3 broader unemployment dynamics of the past 4 years. The same holds for the 5 years MA and rolling STDEV.

So while the official unemployment readings are showing a very robust recovery, broader measures of unemployment continue to trend in line with the economy still carrying the hefty legacy of the recent crises.

Posted by TrueEconomics at 1:16 AM