The funds will be used to reorganise banks operations and shift non-performing and high risk assets to a Trust Bank-based 'bad bank' which will operate as an asset management company.

After divesting bad loans, Otkritie is expected to be sold back to private investors.

As BOFIT note: "...the CBR to date has used over 45 billion USD (about 3% of 2017 GDP) in supporting the three banks that it took over last year. Some of this amount, however, should be recovered when assets in banks acquired by the CBR are sold off as well as in the planned privatisations of the banks." At the beginning of June, Otkritie stated that the bank aims to float a 15-20% stake in 2021. The bank said t's target for pricing will be "at least 1.3 times the capital the bank has at the end of 2020". Otkritie targets return on equity of 18% in 2020, and so far, in the first five months of 2018, the bank made RB 5.4 billion in net profit, per CBR.

Another lender, Sovetsky bank from Saint Petersburg lost its license on July 3. The bank gas been in trouble since February 2012 when the CBR approved its first plans for restructuring. In February 2018, the bank was in a "temporary administration" through the Banking Sector Consolidation Fund. The latest rumours suggest that Sovetsky deposits and loans assets will retransferred to another lender.  Sovetsky was under original administration by another lender, Tatfondbank, from March 2016, until Tatfondbank collapsed in March 2017 (official CBR statement https://www.cbr.ru/eng/press/PR/?file=03032017_105120eng2017-03-03T10_47_12.htm, and see this account of criminal activity at the Tatfondbank: https://en.crimerussia.com/financialcrimes/collapse-of-tatfondbank-robert-musin-siphoned-off-funds-from-state-owned-bank/ and https://en.crimerussia.com/financialcrimes/tatfondbank-officially-collapses/). Tatfondbank's tangible connection to Ireland's IFSC was covered here: https://realnoevremya.com/articles/1292-tatfondbank-raised-60-million-via-obscure-irish-company-just-before-collapse.

Overall, CBR have done as good a job of trying to clean up Russian banking sector mess, as feasible, with criminal proceedings underway against a range of former investors and executives. The cost of the CBR-led resolution and restructuring actions has been rather hefty, but the overall outrun has been some moderate strengthening of the sector, hampered by the tough trading conditions for Russian banking sector as a whole. A range of U.S. and European sanctions against Russian financial institutions and, more importantly, constant threat of more sanctions to come have led to higher funding costs, more acute risks profiles, lack of international assets diversification, and even payments problems, all of which reduce the banking sector ability to recover low quality and non-performing assets. The CBR has zero control over these factors.

Russia currently has 6 out of top 10 banks in CEE, according to The Banker rankings: 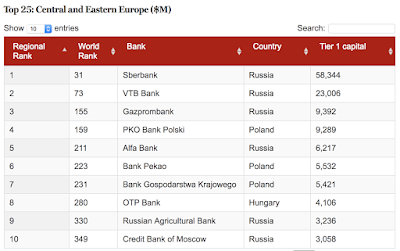 These banks are systemic to the Russian economy, and only the U.S. sabre rattling is holding them back from being systemic in the broader CEE region. This is a shame, because opening up a banking channel to Russian economy greater integration into the global financial flows is a much more important bet on the future of democratisation and normalisation in Russia than any sanctions Washington can dream up.

As an aside, new developments in the now infamous Danske Bank case of laundering 'blood money' from Russia, relating to the Magnitzky case were reported this week in the EUObserver: https://euobserver.com/foreign/142286.

Posted by TrueEconomics at 6:41 PM