Based on the most current data for Irish employment and working hours, I have calculated the difference between the two key time series, the Full Time Equivalent employment (FTE employment) and the officially reported employment.

Let’s take some definitions on board first:

Based on these definitions, in 1Q 2018, there were 2.2205 million people in official employment in Ireland. However, 51,800 of these worked on average between 1 and 9 hours per week, and another 147,300 worked between 10 and 19 hours per week. And so on. Adjusting for working hours differences, my estimated Full Time Equivalent number of employees in Ireland in 1Q 2018 stood at 1.94223 million, or 278,271 FTE employees less than the official employment statistics suggested. The gap between the FTE employment and officially reported number of employees was 12.53%.

All the data is plotted in the chart below 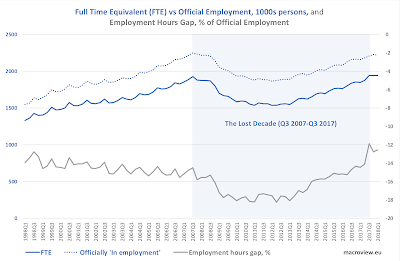 Per chart above, the following facts are worth noting:

The improved quality of employment as reflected in better mix of FT and  >FT employees in the total numbers employed, generated in the recent recovery, is highlighted in the chart as well, as the gap has been drawing closer to zero.

One more thing worth noting here. The above data is based on inclusion of the category of employees with “Variable Hours”, which per CSO include “persons for whom no usual hours of work are available”. In other words, zero-hours contract workers who effective do not work at all are included with those workers who might work one week 45 hours and another week 25 hours. So I adjust my FTE estimated employment to exclude from both official and FTE employment figures workers on Variable Hours. The resulting change in the EHG gap is striking: 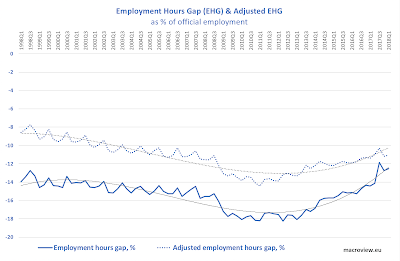 Per above, while the recovery has been associated with a modestly improving working hours conditions, it is now clear that excluding workers on Variable Hours’ put the current level of EHG still below the conditions prevailing in the early 2000s. More interestingly, we can see a persistent trend in terms of rising / worsening gap from the end of the 1990s through to the end of the pre-Crisis boom at the end of 2007, and into the collapse of the Irish economy through 2012. The post-Crisis improvement in Employment Hours Gap has been driven by the outflows of workers from the Variable Hours’ to other categories, but when one controls for this category of workers (a category that is effectively ‘catch-all-others’ for CSO) the improvements become less dramatic.

Overall, FTE estimates indicate some problems remaining in the Irish economy when it comes to the dependency ratios. Many analysts gauge dependency ratios as a function of total population ratio to those in official employment. The problem, of course, is that the economic capacity of someone working close to 40 hours per week or above is not the same as that of someone working less than 20 hours per week.

Note: More on dependency ratios next.
Posted by TrueEconomics at 12:55 AM