Bank for International Settlements Annual Report for 2018 has a very interesting set of charts covering the growing global debt bubble, one of the key risks to the global economy highlighted in the report.

As noted by BIS: “...financial markets are overstretched, as noted above, and we have seen a continuous rise in the global stock of debt, private plus public, in relation to GDP. This has extended a trend that goes back to well before the crisis and that has coincided with a long-term decline in interest rates". 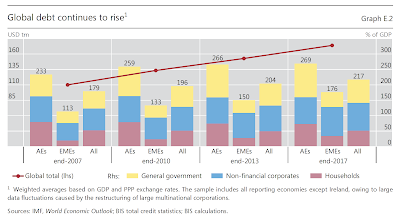 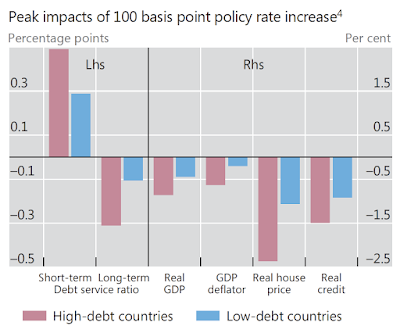 As the Central Banks embark on gradual, well-flagged in advance and 'orderly' overall rates and asset purchases 'normalization', the global economy is likely to bifurcate, based on individual countries debt exposures. As the chart above shows, impact from a modest, 100bps hike in rates, will be relatively significant for all economies, with greater impact on highly indebted countries.

Per BIS: "Since the mid-1980s, unsustainable economic expansions appear to have manifested themselves mainly in the shape of unsustainable increases in debt and asset prices. Thus, even in the absence of any near-term market disruptions, keeping interest rates too low for too long could raise financial and macroeconomic risks further down the road. In particular, there are reasons to believe that the downward trend in real rates and the upward trend in debt over the past two decades are related and even mutually reinforcing. True, lower equilibrium interest rates may have increased the sustainable level of debt. But, by reducing the cost of credit, they also actively encourage debt accumulation. In turn, high debt levels make it harder to raise interest rates, as asset markets and the economy become more interest rate-sensitive – a kind of “debt trap”."

"A further complication in calibrating normalisation relates to the need to build policy buffers for the next downturn. Indeed, the room for policy manoeuvre is much narrower than it was before the crisis: policy rates are substantially lower and balance sheets much larger". And here's the mouse: cyclically, we are nearing the turning point in the current expansion. And despite all the PR releases about the 'robust recovery' current up-cycle in the global economy has been associated with lower growth rates, lower productivity growth, lower real investment (as opposed to financial flows), and more debt than equity (see http://trueeconomics.blogspot.com/2018/07/14718-second-longest-recovery.html).

In other words, things are risky, but also fragile. Elephants in a china shop. Enters a mouse...

Posted by TrueEconomics at 5:53 AM