The net outrun was that global manufacturing has ended 2015 an inch closer to zero growth / stagnation point and certainly nowhere near the levels of growth consistent with amplification in global economic growth rates forward. Most of this trend is down primarily to BRIC economies all of which have seen Manufacturing PMI falling below 50 marker for the first time since March 2009. As noted, this evidence strongly suggests overall continued downward pressures on growth in world’s largest emerging markets.


Russian Services PMI data was covered in the earlier post here: http://trueeconomics.blogspot.ie/2016/01/4116-russia-services-manufacturing-pmis.html on monthly basis and on quarterly basis here: http://trueeconomics.blogspot.ie/2016/01/4116-russian-pmi-in-4q-2015-signalling.html. The key takeaway from these was that the data strongly suggests that not only did the economy failed to attain stabilisation, but that growth might have turned more negative in 4Q 2015 in both services and manufacturing sectors.


China Services PMI eased to 50.2 in December, down from 51.2 in the previous month, statistically signalling zero growth in the Services sector. This marks the second-lowest index reading since the series began in November 2005 (behind July 2014). 4Q 2015 average reading stands at 51.1, which is weaker than 3Q reading of 51.9 and well below the 4Q 2014 reading of 53.1.

Per Markit release: “Relatively subdued client demand … was highlighted by only a marginal
increase in new work at service providers that was one of the weakest seen in the series history.”

Per Markit: “Sub-sector data indicated that output rose in four of the six broad areas of the service economy, the exceptions being Hotels & Restaurants and Transport & Storage. The best performing categories in December were ‘Other Services’ and Financial Intermediation. Leading services activity to increase was a solid rise in incoming new work, one that was faster than
that seen in November. Anecdotal evidence highlighted strengthening demand conditions.” This puts Services dynamics at odds with Manufacturing which posted a significant contraction.

Per Markit: “Survey participants commented that worsening economic conditions led new business and activity to decrease. All six monitored subsectors posted lower activity in December, a trend that has been observed throughout the past eight months. The quickest rates of decline were seen in ‘Other Services’, Renting & Business Activities and Post & Telecommunication. Leading services activity to decrease was a further drop in incoming new work. Having accelerated since November, the pace of reduction was among the fastest in the survey history. Panellists indicated that a deepening economic downturn restricted clients’ confidence in committing to new projects.”

4Q 2015 average for Brazil Services PMI now stands at 44.0, up on 3Q 2015 reading of 41.9, but overall so poor, one can’t talk about any improvement at these levels of signalled contraction.


Summary of movements in PMIs for BRIC economies is provided in the table below: 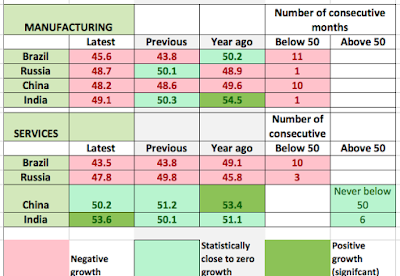 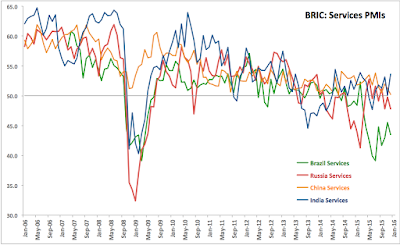 I will be covering composite PMIs next, but overall Services PMIs conclusion is that a positive improvement in India was offset by deteriorating growth in China and outright fall-offs in activity in Russia and (much worse) in Brazil. Overall, the data from Services compounds the already rotten data from Manufacturing.

Posted by TrueEconomics at 6:36 PM