A recent paper, titled "Transmission Channels of Systemic Risk and Contagion in the European Financial Network" co-authored by Nikos Paltalidis, Dimitrios Gounopoulos, Renatas Kizys, Yiannis Koutelidakis (Journal of Banking and Finance, gated) tackles a very interesting problem relating to the systemic stability of the European banking system and the bi-directional contagion channels shifting/transmitting systemic shocks between the banks and the sovereigns.

Following the euro area banking crisis of 2008-2012 (with residual effects of this crisis still strongly present in the so-called euro area 'periphery'), financial systems analysts and modellers came to the realisation that a number of key questions relating to overall system stability remain un-answered to-date. These include:

As the authors correctly note, "These fundamental themes remain unanswered, and hence obtaining the answers is critical and at the heart of most of the recent research on systemic risk."

Summary of the findings relating to sources of shocks:

So the model does support the view that “the Sovereign Credit Risk channel dominates systemic risks amplified in the euro area banking systems and hence, it is the primary source of systemic risk.” Which is quite interesting from a number of perspectives:

Now, let’s give it a thought: since the end of the crisis, we’ve been told that solution to the problem of preventing future crises and alleviating the costs of those that still might happen is more coordination, harmonisation and integration of banking systems under the watchful eye of ECB. In other words, more internationalisation of domestic banks - more linking between them and banks operating in other economies within the Euro area. What does evidence have to say on that? “…we find that the cross-border transmission of systemic shocks depends on the size and the degree of exposure of the banking sector in a foreign financial system. Particularly, the more exposed domestic banks are to the foreign banking systems, the greater are the systemic risks and the spillover effects from foreign financial shocks to the domestic banking sector.”

Ya wouldn’t! No, ya couldn’t! But… baby… we had firewalls and we had EBU and more interconnected system of Euro area-wide banking supervision… and we now have?.. err… Yep, in the words of the authors: “Finally, the results imply that the European banking industry amid the post-crisis deleverage, recapitalisation and the new regulatory rules, continues to be markedly vulnerable and conducive to systemic risks and financial contagion.” 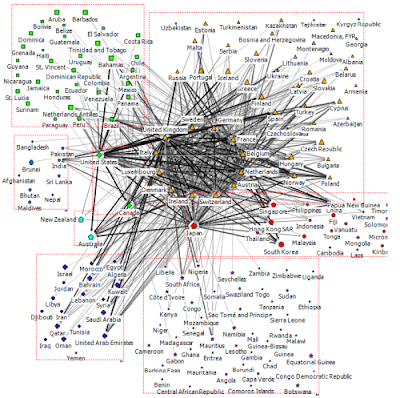 Posted by TrueEconomics at 9:11 PM