In recent posts, I covered Manufacturing sector PMIs for BRIC economies based on monthly data and Services Sector PMIs here.


Brazil Composite PMI fell from 44.5 on November to 43.9 in December, As the result, the economy posted 10th consecutive month of sub-50 readings, and since April 2014, Brazil’s economy registered above 50 readings in only three months, with none of these three readings being statically significantly different from 50.0. The last time Brazil’s Composite PMI posted reading statistically consistent with positive growth was in February 2013.

In December, both Manufacturing and Services sectors indicated contracting activity, with Markit concluding that “Private sector activity in Brazil continued to plunge in December as a deepening economic retreat contributed to a further contraction in new business. The seasonally adjusted Composite Output Index fell from 44.5 in November to 43.9 at the year end, pointing to a sharp and stronger rate of reduction. Whereas the downturn in manufacturing production eased (though remained severe), services activity declined at a quicker pace.”


Russian Composite PMI was covered in detail here. Overall, Russia’s Composite index slipped into contraction during December, falling to 47.8, from 50.5 in November, with the decline in output reflected across both manufacturing production and services activity. Overall, Russian economy’s composite PMI averaged 49.1 in 4Q 2015 which is much worse than 50.4 average for 3Q 2015. The data strongly suggests that not only did the economy failed to attain stabilisation, but that growth might have turned more negative in 4Q 2015.


Chinese Composite PMI also signalled declining business activity in December, falling to 49.4 from 50.5 in November. Overall, China posted four months of below 50 readings on Composite PMIs out of the last 5 months and the last time Chinese Composite PMI was consistent with statistically significant growth was in August 2014. In 4Q 2015, Chinese Composite PMI averaged 49.9, which is better than 3Q 2015 average of 49.2, but much worse than the 4Q 2014 average of 51.6. Unlike Russia and Brazil, which posted sub-50 readings across both Manufacturing and Services, China posted sub-40 reading in Manufacturing and above 50 reading in Services, That said, the Services reading was 50.2 - statistically consistent with zero growth - and the second weakest on record (the weakest point was 50.0 in July 2014).


India Composite PMI rose unexpectedly from November’s five-month low of 50.2 to a four-months high of 51.6 in December. Thus, per Markit, the index was “indicative of a rebound in growth of private sector activity. Whereas manufacturing production decreased for the first time since October 2013, services activity increased at an accelerated pace.”

Further per Markit: “Leading services activity to increase was a solid rise in incoming new work, one that was faster than that seen in November. Anecdotal evidence highlighted strengthening demand conditions. Conversely, manufacturing order books decreased, with panellists indicating that demand had been suppressed by the Chennai floods. Across the
private sector as a whole, new business inflows expanded at a faster pace that was, however,
modest.”


Overall Russia was a negative contributor to the BRIC Composite Activity Index dynamic in December, although overall ex-Russia group performance continued to deteriorate in December faster than in November, as indicated in the chart below: 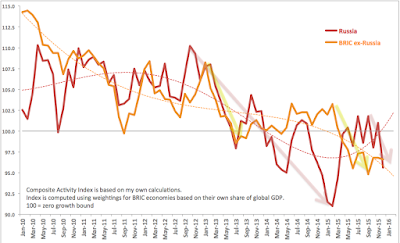 The chart below shows a clear downward trend in BRIC activity setting on from June 2014 and accelerating since May 2015. 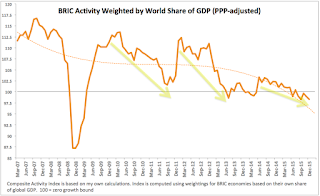 Posted by TrueEconomics at 7:36 PM