25/1/16: Nordic Model: Not Too Heavy Handed on Corporate Profits


Much of the tax debate nowadays has been around tax base erosion and corporate taxes. But the old issue of what to tax: capital or profits is still unresolved. One interesting myth, associated with this debate, is that Nordic countries run a more ‘balanced’ tax system that relies on corporate profit taxes and avoids the problem of so-called harmful tax competition commonly attributed to Anglo-Saxon models where, again allegedly, corporations are treated softly with low tax rates and more benign tax regimes.

Well, a myth is a myth. And a recent paper, titled “Taxing Mobile Capital and Profits: The Nordic Welfare States” by Guttorm Schjelderup (CESIFO WORKING PAPER NO. 5603 NOVEMBER 2015) goes in depth to dispel it.

Per author: “The Nordic countries have traditionally been characterized by an extensive welfare state, a homogenous population and labour force, and redistributive taxation. This has changed in recent years.”

First point of interest is WHY has it changed. Author attributes the change to


These factors “…have put pressures on public finances and the welfare state. These changes can be attributed to the globalization process whereby national economies become more integrated. Economic integration takes place in terms of increasing factor mobility, in particular mobility of capital, and rising volumes of trade in goods and services.”

Now, we have our first lesson: if you run a globally-integrated economy, while you have a modern (aka post-baby boom society) you will see these three factors at play in your economy too. No one’s immune.

“An argument frequently used by political lobby groups is that with free capital mobility corporations shouldn't be taxed at all and that taxing investment income is actually bad for workers. The argument is that if you cut taxes on investment income, more investment is encouraged. More investment means people have more equipment and technology to work with, which should increase the productivity of labour and thus wages and economic growth. Put differently, a tax on mobile capital would lead to an outflow of capital that would cause wages to fall; effectively shifting the full burden of the tax on capital onto workers. It is then better to tax workers directly and levy a zero tax on capital.”

Ok, we’ve heard this before. But is it making any sense?

Per author: “The argument above relies on strong assumptions, among them that labour is immobile and cannot evade taxation, that there are no country specific rents, and that domestic firms are not owned in part by foreigners.” However,

More importantly, “the zero tax on capital result is also difficult to confirm empirically. Yagan (2014), for example, …finds that it caused zero change in corporate investment in U.S. unlisted firms and that it had no impact on employee compensation. It did, however, have an immediate impact on financial pay-outs to shareholders. Alstadsæter et al. (2015)… find that the Swedish 2006 dividend tax cut did not affect aggregate investment but that it affected the allocation of corporate investment. In particular, …relative to cash-rich firms, cash-constrained firms increased their investments after the dividend tax cut.”

Key, however, is that corporate tax acts as “…a “backstop” to the personal income tax. If a country abolished the corporate tax rate, wealthy individuals in particular would be given an incentive to reclassify their labour earnings as corporate income, typically using offshore corporate structures and escape tax. The corporate tax might also be needed to avoid excessive income shifting between labour income and capital income. Finally, the corporate tax also acts as a withholding tax on equity income earned by non-resident shareholders, who might otherwise escape taxation in the source country.”

Now onto evidence regarding evolution of tax regimes.

“Countries throughout the world have reduced their corporate taxes in an effort to attract or retain corporate investments. The Nordic countries have pioneered what is commonly known as the dual income tax (DIT). It combines a flat tax rate on capital income with progressive taxation of labour income. One of the arguments in favor of the DIT is that it allows policy makers to lower the corporate tax rate to reduce the risk of capital flight, whilst at the same time tax distributed dividends to personal shareholders.”

But there are “challenges of taxing capital for small open economies. Although the corporate tax share of GDP in most countries is only around 3-4%, it is an important tax because it acts as a “backstop” for the personal tax rate. …The pressures of tax competition are exacerbated by tax planning and income shifting to low tax countries by multinationals. Studies show that multinationals pay less tax than domestic firms and this may give them a competitive edge over domestic firms. The long term effects may be changes in ownership structure that affect competition in markets and make the corporate tax base more tax sensitive. Profit shifting is undertaken through transfer pricing and thin capitalization (excessive debt).” Care to spot Irish trends here? Why, they are pretty obvious.

But back to the Nordics vs Anglo-Saxons arguments. Per paper, “It is interesting to note that the Nordic countries seem to have gone further in terms of abolishing redistributive capital taxes than countries traditionally associated with polices much less tuned to redistribution. Aaberge and Atkinson (2010) shown how income inequality at the top of the distribution has increased in Anglo-Saxon countries, whereas the same rise in top income shares was not experienced by Continental European countries. They find that the Norwegian and Swedish experience over the twentieth century is similar to the Anglo-Saxon countries in that top shares, and the concentration among top incomes have first fallen and then risen. Norway differs from Sweden in that that the top shares rose more sharply in the period 1990-2006. Between 1980 and 2004, for example, the share of the top 1 per cent more than doubled in Norway, but rose less than half in Sweden.” 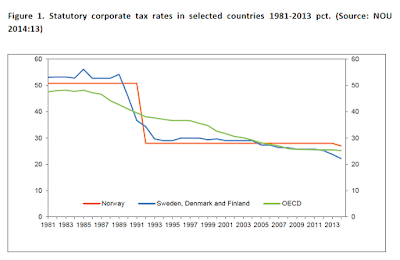 What are the reasons for these trends?

“Several explanations have been put forward to explain why Norway sets itself apart. The implementation of the 1992 tax reform abolished the dividend tax and lead to a sharp increase in dividends and capital gains among the richest in Norway. Capital taxation in Sweden was less favourable. Substantial oil production in Norway started some 15 years before the rise in inequality, but could still be an explanatory factor due to constrained cash in this sector in the initial phase of production. Capital market reforms with liberalization of interest rates and an upturn in business cycles are also important factors that are hard to disentangle, but they certainly played a role.”

Social impact of tax-linked inequality? “Capital taxation also affects income mobility, and concerns about rising inequality have often been countered by constant changes in the composition of top income earners. If so, the rise in top incomes may not translate into “economic power”. Aaberge et al. (2013) study who enters and leaves the top income groups in Norway in the period 1967-2011. Their main conclusion is that despite large changes in top income mobility over the last four decades, the magnitude of the effect of the changes in mobility on the income shares was moderate.”

What’s the future holds? “Competition among countries to attract mobile capital is a persistent phenomenon and will be a driver towards still lower taxes on mobile capital. A major change from the past, then, is less ability to redistribute, increasing income inequality, and rising immigration from poor countries. In sum these forces may affect trust between members of society. The level of trust is positively linked to economic growth. Herein lies a major challenge for the Nordic welfare states.”

And as an aside, here’s the actual draw on Nordic v Anglo-Saxon patterns in taxation: “In 2004, the classical welfare states in Scandinavia and continental Europe had lower ratios of statutory corporate to wage taxes than the Anglo-Saxon countries (except Ireland). In 2004, the corporate tax rate was only 63% of the wage tax rate for an average worker in Sweden, but 171% of the wage tax rate in the United States. Such differences are in striking contrast to the common perception that social democratic governments (as in Scandinavia and continental Europe) share a higher preference for redistribution, as compared to more conservative and free market oriented types of governments.” 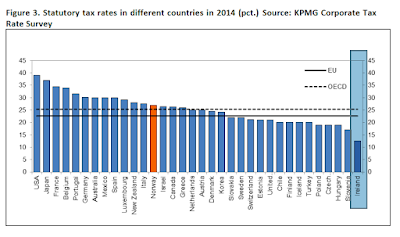 Posted by TrueEconomics at 4:16 PM