Why Russian Central Bank’s chief Elvira Nabiullina deserves title of the best central banker she got in 2015? Why, because she sticks to her stated objectives and goes on even in challenging conditions.

But times have been tough for such reforms, amidst credit tightening, rising arrears and economic crisis. Again, majority of the problems are within the lower tier banks, but numbers of loss-making institutions has been climbing over 2015. January-November 2015 data shows that almost 30% of Russian banks are running operating losses and overdue loans have risen by nearly 50% to RUB2.63 trillion. Still, this constitutes less than 7 percent of total credit outstanding. Stressed (but not necessarily overdue) loans rose from 7 percent of total credit in January 2015 to 8 percent at the end of December 2015. Notably, both stressed and overdue loans numbers are surprisingly low. And on another positive side, bank’s own capital to assets ratio averaged 13 percent. The aggregate numbers conceal quite some variation within the banking sector, as noted by Bofit: “At the beginning of November, 129 banks had equity ratios below 12%. Large deficiencies in calculating the capital have come to light in several bank insolvencies.”

Amidst this toughening of trading conditions, CBR continued to push our weaker banks from the market. Over 2015, 93 banks lost their licenses, almost the same number as in 18 months prior with just 740 banks left trading the market as of December 2015. As the result, banking sector concentration rose, with 20 largest banks now holding 75 percent share of the market by assets. In January-October 2015, some 600,000 depositors in Russian banks were moved from banks losing licenses to functioning banks, per report here.

Chart from Bofit illustrates the trends in terms of banking licenses revoked: 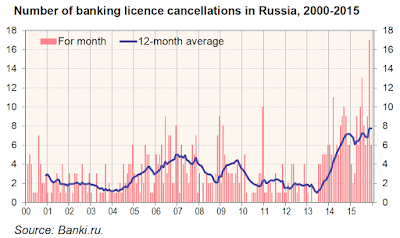 Overall, this is good news. Russian banking system evolved - prior to 2009 - into a trilateral system of banks, including strong larger (universal) banks, medium-sized specialist and foreign banks with retail exposures, weak and sizeable fringe of smaller institutions, often linked to industrial holding companies. Aside from VEB - which officially is not a bank - larger banks are operating in tough conditions, but remain relatively robust. Smaller banks, however, having relied in previous years on higher risk consumer credit and holding, often, lower quality capital, have been impacted by the crisis and by the lack of liquidity. Shutting these operations down and consolidating the smaller banks' fringe is something that Russian needs anyway.

Posted by TrueEconomics at 5:36 PM