BRIC Manufacturing PMIs by Markit for October were out earlier this week, so here is the summary of latest changes:

Russia:
Russian manufacturing PMI posted a reasonably significant improvement, rising from 49.1 in September to 50.2 in October, and marking the first month since November 2014 of above 50 readings. That said, the indicator is statistically indistinguishable from 50.0 and the level of activity uplift is weak. Per Markit release, “new orders placed with manufacturing companies in Russia grew for the second successive month in October. The rate of expansion was the sharpest since November 2014, despite being modest overall. The increase in new business was driven by stronger demand from the domestic market, however, as new export orders declined. …Workforce numbers at Russian manufacturers contracted in October. However, the latest reduction in headcounts was the weakest for seven months. The sharpest drop in employee numbers was registered by consumer goods producers, according to sector data.” On a 3mo average basis, 3mo average through October stood at 49.1, somewhat better than 48.2 3mo average through July 2015, but still below 50.6 reading in 3mo through October 2014. Overall, Manufacturing reading for Russia confirms weak stabilisation in growth trend with PMIs rising for the second consecutive month. At this stage, it is too early to call recovery based on these readings, but a positive sign is that Manufacturing sector is no longer a negative factor in determining growth in the economy.

India:
Indian Manufacturing PMI posted weaker reading in October, falling to 50.7 from 51.2 in September. This is the weakest reading in the index since December 2013 (when it stood at 50.7 as well). On a 3mo average basis, 3mo average through October stood at 51.4, weaker than 52.2 3mo average through July 2015, and marginally below 51.7 reading in 3mo through October 2014. Per Markit release: “the latest PMI dataset highlighted weaker growth of both output and new orders. Encouragingly, companies added to their worforces for the first time since January and continued to increase buying levels. …the PMI has recorded above the crucial 50.0 threshold in each month since November 2013. Output growth eased in October on the back of a slower increase in new orders.” In summary, Indian manufacturing sector has avoided contraction in activity, but growth conditions have again deteriorated - with index declining for the third month in a row.

China:
Chinese manufacturing PMI came in at 48.3 in October, up from 47.2 in September, but still below 50.0. This means that Chinese manufacturing has now been in a contraction territory for the 8th consecutive month. 3mo average through October stood at 47.6, weaker than 48.8 3mo average through July 2015, and below 50.3 reading in 3mo through October 2014. Per Markit: “Total new business declined only modestly, helped in part by a renewed increases in new export orders. This in turn contributed to softer contractions of output and employment in October. Operating conditions have now worsened in each of the past eight months, though the latest deterioration was the weakest since June.”

Brazil:
Brazil manufacturing sector shrunk at a record breaking pace, posting October PMI at 44.1 down from an already abysmal 47.0 in September. This marks the lowest reading in PMI for 79 months running and ninth consecutive month of sub-50 readings. 3mo average through October is now standing at 45.6, which is down from the extremely poor 46.5 3mo average through July 2015. Over 3mo through October 2014 the index was reading 49.5. Per Markit: “PMI data for October indicated that Brazil’s manufacturing recession worsened. Rates of contraction in both output and new orders accelerated to the fastest since the financial crisis, leading companies to cut jobs at the quickest pace in six-and-a-half years. Output fell for the ninth consecutive month, the longest sequence of continuous reduction since the global financial crisis. ...October saw the rate of contraction accelerate to the sharpest since March 2009.” 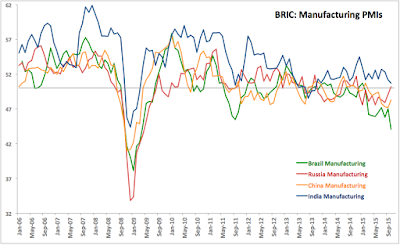 Overall:
BRIC Manufacturing sector performance posted very poor figures in October, following on already poor performance in 3Q 2015. This suggests that the global economic growth slowdown remains in place despite some firming up if data coming from Europe. Amongst BRIC economies, India remains the strongest performer, with Russia now close second. China is continuing to post weak data, while Brazil is in an outright deep sectoral recession.

Posted by TrueEconomics at 9:19 AM