Bruegel’s  Pa Huttl and Guntram Wolff have recently posted on Capx.co results of their study, under a handy title “Lack of confidence in the welfare state in the year 2050” (link here).

One chart sums up key evidence: 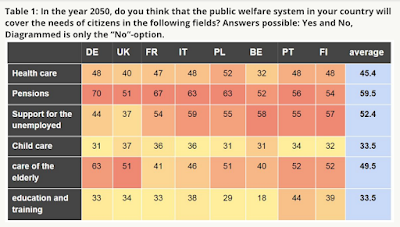 Darn scary numbers these are, even though, in my opinion, these are still too optimistic. The levels of implied state debt relating to what we call 'unfunded obligations' - contractually specified future commitments across pensions and healthcare benefits (excluding statutory, but non-contractual obligations) implies much lower probabilities of the modern welfare states being able to sustain current levels of funding.

Good example is the U.S. where current official debt stands at around USD18.5 trillion, whilst unfunded civilian and military pensions, plus Social Security and Medicare, inclusive of other contractually set Federal commitments and contingencies add another USD46-47 trillion to that (you can read more on this here)