While leadership of Ireland ponders the fortunes of our 'globally connected' (yet somehow always exceptional) economy, here is an actual global picture of who drove Europe's (and Ireland's) 'exporting economy' model of economic expansion.

The chart below plots current account imbalances by region as % of global GDP from 1980 through today. 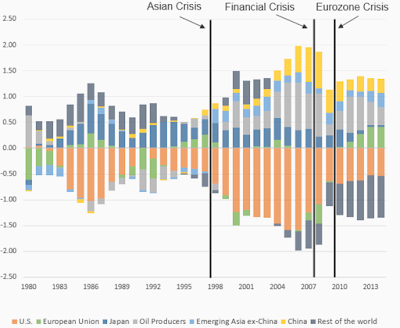 Thus, leveraging of the U.S. economy, including through trade, household demand and corporate tax 'optimisations' was the consistent driving force behind the miracle of European growth (and global growth in general) since at least 1983. Since 2011 - the coincidentally very year of Irish recovery - U.S. deficits and growing deficits from the ROW have been coincident with rising surpluses for the EU.

Table below (compiled using IMF WEO database data) shows cumulated current account balances from 1980 through 2015 for the main groups of economies and the U.S. expressed in billions of euro: 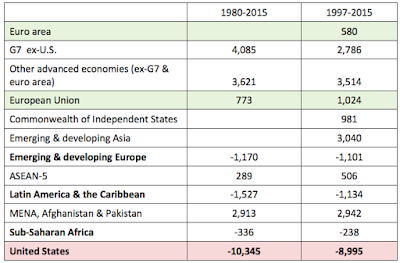 In a way, all strategy of 'national development policies' talk aside, brutal reality of the years ahead is that unless someone else picks up the U.S. leveraging game, there is little scope for the externally-driven economic models of Europe in the future.

Irish exceptionalist insiders should pause for some thought... perhaps on their way to a fancy state sponsored lunch at the Castle...

Posted by TrueEconomics at 7:59 PM