Back in September, German think tank, CESIfo estimated the cost of European refugees crisis to be at around EUR10 billion (Germany costs alone). Yesterday (with update today), the Institute released updated estimates: 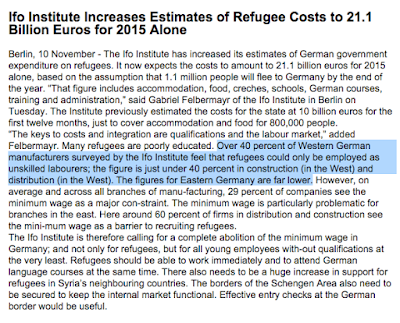 Crucially, per above release, the Ifo pours some serious cold water on the commonly repeated in the media claims that refugees can provide a substantial boost to the German economy due to their alleged employability.

Posted by TrueEconomics at 3:38 PM