Oh, spare a kind thought for the economists... crippled by the intellectual feebleness of algebraic (and utterly useless) models and hamstrung by the need to sell 'good news' to naive retail clients pounded by the sell-side 'research', they have it tough in this life. And the things are going to get tougher.

So far, in anticipation of the U.S. Fed hikes, virtually all economics analysts working for sell-side stuff brokers have been declaring their firm conviction that once the Fed raises rates, things are going to be off to a neatly clean start - the U.S. economy will shake off any risks to growth, while the Euro area economy will get a devaluation boost from stronger dollar.

Which, by the way, may or may not happen, but as Reuters article (link here) clearly shows, it wouldn't be the economists crowd that will have any idea what is going to happen.

Here are two charts from Reuters: 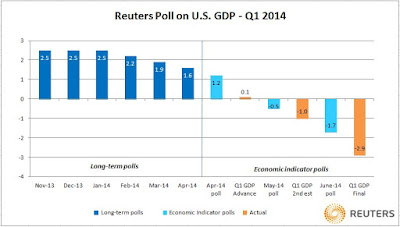 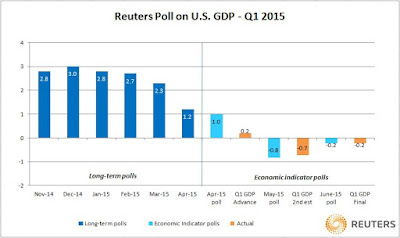 Now, give this a thought: 2014 and 2015 were relatively 'trend' years for the U.S. economy. And yet, in both cases, analysts surveyed by Reuters vastly, massively, grossly missed the boat on their forecasts. The dodos did predict back in January 2015 that 1Q 2015 growth will be 2.8%, missing the mark by 3 percentage points. And they did chirp out a forecast of 2.5% growth for 1Q 2014 back in January 2014, missing the reality by a massive 5.4 percentage points.

And to give you some more flavour, here is a summary of IMF forecasts for advanced economies (not just the U.S.): 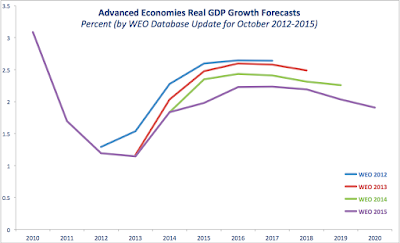 Which confirms the aforementioned truth: economic forecasts ain't got a clue where the major advanced economies are heading, with or without Fed rate hikes.

It would be laughable, if this was not serious: the same types of economists inhabit the forecasting halls of the Fed, providing 'technical (mis-)guidance' to the FOMC on which the decision to hike rates will be made. In other words, the blind are driving, the deaf are navigating them and we are all the passengers on their happy runaway train.

So buckle up. When Fed hikes rates, things might go smooth or they might go rough - we just don't know. But we do know as much: all these economic forecasters have not a clue what will happen...

Posted by TrueEconomics at 9:51 AM