3/8/17: New research: the Great Recession is still with us


Here is the most important chart I have seen in some months now. The chart shows the 'new normal' post-2007 crisis in terms of per capita real GDP for the U.S. 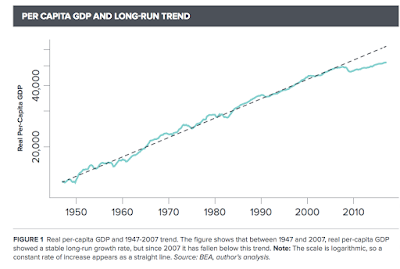 The key matters highlighted by this chart are:


As the result, as the Roosevelt Institute research note states, " output remains a full 15 percent below the pre-2007 trend line, a gap that is getting wider, not narrower, over time".

The dramatic nature of the current output trend (post-2007) departure from the past historical trend is highlighted by the fact that pre-crisis models for forecasting growth have produced massive misses compared to actual outrun and that over time, as new trend establishes more firmly in the data, the models are slowly catching up with the reality: 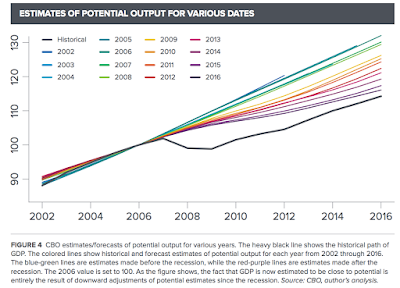 Finally, confirming the thesis of secular stagnation (supply side), the research note presents evidence on structural decline in labor productivity growth, alongside the evidence that this decline is inconsistent with pre-2007 trends: 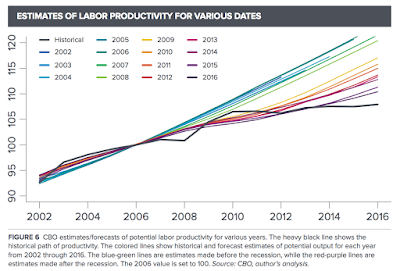 On the net, the effects of the Great Recession in terms of potential output, actual output growth trends, labor productivity and wages appear to be permanent in nature. In other words, the New Normal of post-2007 'recovery' implies permanently lower output and income.

Posted by TrueEconomics at 7:02 AM