Ireland scored another ‘first’ in the league tables relating to tax optimisation and avoidance, staying at the top of the Euro area rankings as a Special Purpose Vehicles (SPVs) destination: http://uk.reuters.com/article/uk-ireland-funds-idUKKCN1AY1AK (featuring my comment, amongst others).

As my comment in the article linked above alludes, there is a combination of factors that is driving Ireland’s ‘competitiveness’ in this area. Some are positive for the economy and non-zero-game in relation to our trading partners, e.g.
- Ireland providing a functional access to the European markets via regulatory and markets infrastructure arrangements that facilitate trading from Dublin into the rest of the EEC;
- Ireland offering a strong platform for on-shoring human capital, a much more functional platform than any other EU nation, due to greater openness to skills-based migration, English language, common law and open culture;
- Ireland serves as a clustering centre for a range of financial services functions, making it more attractive than traditional tax havens for conducting real business.

Over the recent decades, Irish Governments and business organisations have been aggressive (or better said - active) in positioning the country as a platform for inward investment. The first waves of this strategy involved emphasis on pure tax optimisation (e.g. during the 1990s), with subsequent efforts (often less successful and slower to develop) involving building specialist niches of financial services activities in Ireland (e.g. funds management in the 2000s and focus on specialist listings, such as debt and SPVs, in the 2000s-2010s).

On the other hand, aggressive positioning achieved by Ireland in tax optimisation-driven FDI and tax-focused corporate inversions has become a significant drag on the country’s reputation as a functional (as opposed to post-box) business centre. In addition, the Financial Crisis has introduced new dimensions to this reputational erosion: in addition to the G20-initiated push for greater tax transparency and harmonisation, Ireland also - mistakenly - pursued tax-based incentives for vulture funds acquiring distressed Irish properties from the likes of Nama and IBRC. A combination of growing tax inversions, BEPS reviews and reforms, vulture funds aggressive use of the tax structures has resulted in a more recent tightening of the SPVs regulations and oversight.

Striking a balance between real economic incentives and egregious tax optimisation is a hard target to hit for a small open economy that, like Ireland, faces very tangible and aggressive international competition. The bad news is that we are yet to find a ‘golden ratio’ for proper regulation and supervision regimes that can allow us to retain a competitive edge, while rebuilding positive reputation with our trading partners and investors as a place for doing functional/tangible business. The good news is that we are becoming more aware of the need to strike such a balance. 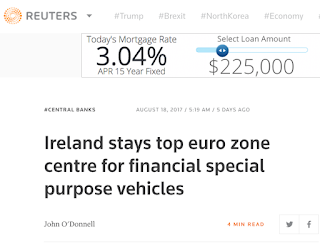