12/8/17: Some growth optimism from the Russian regional data


An interesting note on the latest data updates for the Russian economy via Bofit.

Per Bofit: "Industrial output in Russian regions rises, while consumption gradually recovers." This is important, because regional recovery has been quite spotty and overall economic recovery has been dominated by a handful of regions and bigger urban centres.

"Industrial output growth continued in the first half of this year in all of Russia’s eight federal districts," with production up 1.5–2% y/y in the Northwest, Central and Volga Federal Districts, as well as in the Moscow city and region. St. Petersburg regional output rose 3-4% y/y.

This is striking, until you consider the nature of the 2014-2016 crisis: a negative shock of collapsing oil and raw materials prices was mitigated by rapid devaluation of the ruble. This cushioned domestic production costs and shifted more demand into imports substitutes. While investment drop off was sharp and negative on demand side for industrial equipment and machinery, it was offset by cost mitigation and improved price competitiveness in the domestic and exports markets.

Another aspect of this week's report is that Russian retail sales continue to slowly inch upward. Retail sales have been lagging industrial production during the first 12 months of the recovery. This is a latent factor that still offers significant upside to future growth in the later stages of the recovery, with investment lagging behind consumer demand.

Now, "retail sales have turned to growth, albeit slowly, in six [out of eight] federal districts." 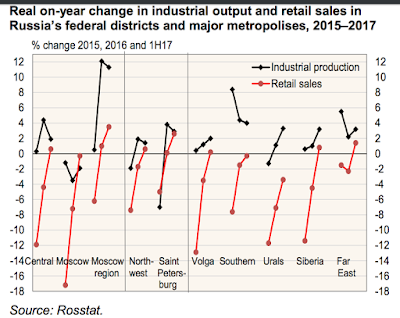 Here is why these news matter. As I noted above, the recovery in Russian economy has three phases (coincident with three key areas of potential economic activity): industrial production, consumption and investment. The first stage - the industrial production growth stage - is on-going at a moderate pace. The 0.4-0.6 percent annual growth rate contribution to GDP from industrial production and manufacturing can be sustained without a major boom in investment. The second stage - delayed due to ruble devaluation taking a bite from the household real incomes - is just starting. This can add 0.5-1 percent in annual growth, implying that second stage of recovery can see growth of around 2 percent per annum. The next stage of recovery will involve investment re-start (and this requires first and foremost Central Bank support). Investment re-start can add another 0.2-0.3 percentage points to industrial production and a whole 1 percent or so to GDP growth on its own. Which means that with a shift toward monetary accommodation and some moderate reforms and incentives, Russian economy's growth potential should be closer to 3.3 percent per annum once the third stage of recovery kicks in and assuming the other two stages continue running at sustainable capacity levels.

However, until that happens, the economy will be stuck at around the rates of growth below 2 percent.

Posted by TrueEconomics at 3:34 AM