So with that much hoopla in your favourite media pages, what’s the data really telling us?

Let’s start from the top: 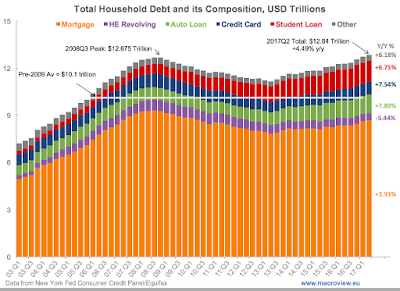 Debt levels are up. Almost +4.5% y/y. All debt categories are up, save for HE Revolving debt (down 5.44% y/y). Increases are led by Auto Loans (+7.89% y/y) and Credit Cards (+7.54%). High growth is also in Student Loans (+6.75%). Mortgages debt is rising much slower, as consistent with lack of purchasing power amongst the younger generation of buyers.

As you know, I look at this debt from another perspective, slightly different from the rest of the media pack. That is, I am interested in what is happening with assets-backed debt and asset-free debt. So here it is: 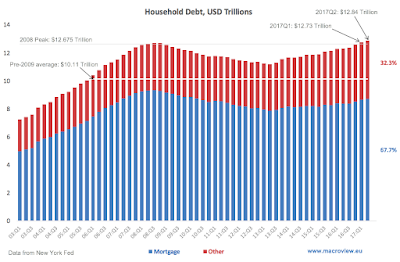 Yes, debt is up again. Mortgages debt share of total household debt has shrunk (it is now at 67.7%) and unsecured debt share is up (32.3%). Unsecured debt was $3.925 trillion in 2016 Q2 and it is now $4.148 trillion. Why this matters? Because although cars can be repossessed and student loans are non-defaultable even in bankruptcy, in reality, good luck collecting many quarters on that debt. Housing debt is different, because with recent lending being a little less mad than in 2004-2007, there is more equity in the system so repossessions can at least recover meaningful amounts of loans. So here’s the thing: low recovery debt is booming. While mortgages debt is still some $600 billion odd below the pre-crisis peak levels.

On the surface, mortgages originations are improving in terms of credit scores. In practice, of course, credit scores are superficially being inflated by all the debt being taken out. Yes, that’s the perverse nature of the American credit ratings system: if you have zero debt, your credit rating is shit, if you are drowning in debt, you are rocking… 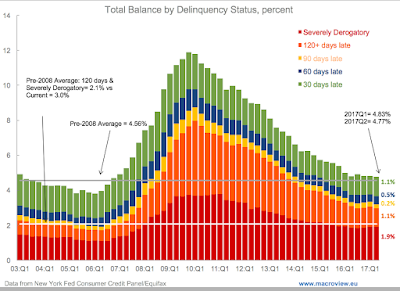 Severely Derogatory and 120+ delinquent loans are still accounting for 3% of total loans, same as in 2Q 2016 and well above the pre-crisis average of 2.1%. Total share of delinquent loans is at 4.77%, slightly below 1Q 2017 (4.83%) and on par with 4.79% a year ago. So little change in delinquencies as a result of improving credit standards at origination, thus. Which suggests that improving standards are at least in part… err… superficial.

And things are not getting better across majority of categories of delinquent loans: 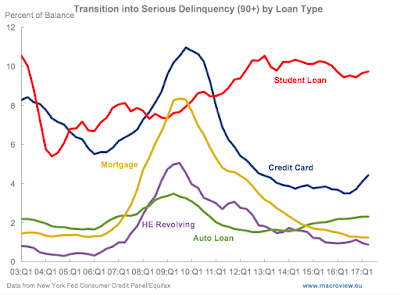 As the above clearly shows, transition from lesser delinquency to serious delinquency is up for Credit Cards, Student Loans and Auto Loans. And confirming that the problem of reading Credit Scores as improvement in quality of borrowers are the figures for foreclosures and bankruptcies. These stood at 308,840 households in 2Q 2017, up on 294,100 in 1Q 2017 and on 307,260 in 2Q 2016. Now, give it a thought: over the crisis period, many new mortgages issued went to households with better credit ratings, against properties with lower prices that appreciated since issuance, and under the covenants involving lower LTVs. In other words, we should not be seeing rising foreclosures, because voluntary sales should have been more sufficient to cover the outstanding amounts on loans. And that would be especially true, were credit quality of borrowing households improving. In other words, how does one get better credit scores of the borrowers, rising property prices, stricter lending controls AND simultaneously rising foreclosures?

Reinforcing this is the data on third party debt collections: in 2Q 2017, 12.5% of all consumers had outstanding debt collection action against them, virtually flat on 2Q 2016 figure of 12.6%. 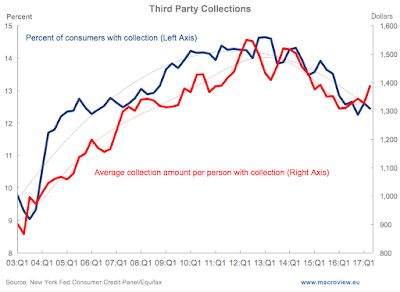 In simple terms, in this Great Recovery Year Eight, one in eight Americans are so far into debt, they are getting debt collectors visits and phone calls. And as a proportion of consumers facing debt collection action stagnates, their cumulative debts subject to collection are rising.

Things are really going MAGA all around American households, just in time for the Fed to hike cost of credit (and thus tank credit affordability) some more.

Posted by TrueEconomics at 5:37 PM