The transition from the Global Financial Crisis, to the Great Recession and to currently fragile recovery has been marked not only by weaker structural growth across the economies and by massive outflows of funds from the emerging markets, but by a dramatic decline in world trade growth. Another stylised fact is that since the onset of the recovery, growth in global trade volumes has been also lagging behind growth in GDP terms.

This has been a puzzling phenomena, inconsistent with the previous recessions. Factually, global trade grew at or below 3 percent in 2012-15, which is below the pre-crisis average of 7 percent (over 1987-2007) and less than the growth of global GDP.

One recent paper (see full citation below) by Neagu, Mattoo and Ruta (2016) attempted to explain this transition to the new global growth environment of relatively subdued global trade growth. Here is a quick summary of their paper. 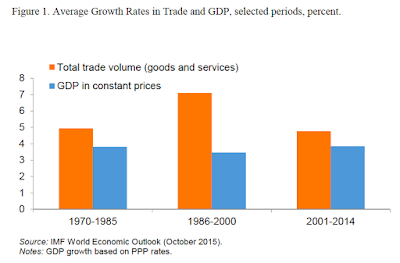 As chart above shows, there has been a major slowdown in growth in world trade volumes. Per Neagu, Mattoo and Ruta (2016), “proximate explanations of the trade slowdown link it to changes in GDP and, hence, to the fallout of the Global Financial Crisis. While weak global demand matters for trade growth as it depresses world import demand, cyclical factors are not the only determinants of the trade slowdown.”

In simple terms, trade is growing slower than GDP not only because GDP growth is slow itself, but “also because the long-run relationship between trade and GDP is changing. The elasticity of world trade to GDP was larger than 2 in the 1990s and declined throughout the 2000s.” So in simple terms, a 1% change in world GDP used to be associated with 2% change in world trade volumes. It no longer is.

“Among the leading causes of this structural change in the trade-income relationship is a shift in vertical specialization. The long-run trade elasticity increased during the 1990s, as production fragmented internationally into global value chains (GVCs), and decreased in the 2000s as this process decelerated.” In other words, logistic revolution of the 1990s is now over and the low-hanging fruit of improving cost margins on production outsourcing and enhancing delivery efficiencies has been picked, leaving little new momentum to drive growth in trade flows over each unit of increase in global income.

Per Neagu, Mattoo and Ruta (2016), “Economists disagree regarding the implications of the trade slowdown for economic growth (and welfare). Some believe that the slowing down of global trade has no real consequences for economic growth. For instance, commenting on the global trade slowdown, Paul Krugman noted that “The flattening out is neither good nor bad, it’s just what happens when a particular trend reaches its limits”. Others take the opposite view. For instance, in a speech as governor of the Central Bank of India, Raghuram Rajan concluded that “We are more dependent on the global economy than we think. That it is growing more slowly, and is more inward looking, than in the past means that we have to look to regional and domestic demand for our growth.”

According to the authors, “both views have elements of truth but neither may be completely right. On the one hand, the impact of the trade slowdown should not be overstated. Most economies are more open today than they were in the 1990s. In so far as openness per se is associated with dynamic benefits, trade will continue to foster growth. On the other hand, there is a risk of understating the implications of the trade slowdown. If the expansion of trade growth in the 1990s contributed to countries’ economic growth, one may suspect that the flattening of this trend will imply that the contribution of trade to the growth process will be lower.”

Neagu, Mattoo and Ruta (2016) go on “to try to investigate the economic consequences of the recent trade slowdown.” The authors focus “…on two channels through which the changing trade-income relationship documented in the literature may affect countries’ economic performance.” These are:

So what do they find?

Secondly, the authors “…try to assess the Smithian concern by focusing on the growth implication of a slowing pace of GVC growth”: 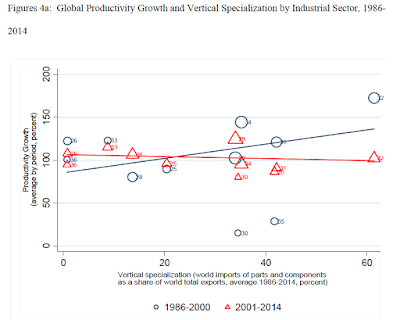 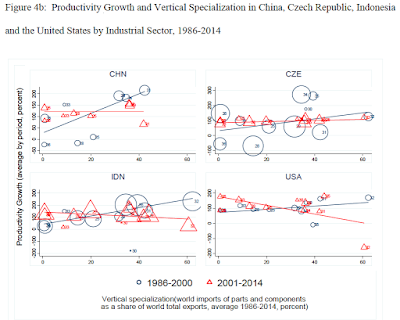 In the above, note the change from blue lines (positive link between the degree of vertical specialization and productivity growth) to red lines (negative link).

In short, things are pretty bad: both factors - demand slowdown and trade slowdown - are cross-related and linked. Both are reinforcing each other, yielding growth slowdown across both supply side and demand side margins. And the side effect is: the two effects being correlated also at least in part captures productivity slowdown - aka, secular stagnation dimension.