Remember record-busting 0.6% preliminary flash estimate of the first estimate GDP growth figure for Euro area released back in April? Well, it sort of was true, sort of...

Sounds good? Brilliant - the euro area outperformed both the U.S. and the UK. But when one looks at annual rates of growth... things are not as shiny. 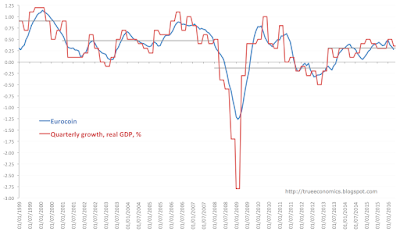 There is a strong smell of smoke from the Eurostat figures. Demand side of the economy is apparently booming. Despite the fact that retail sales are tanking:

Meanwhile, external trade is also underperforming (on foot of euro appreciation from November 2015 lows against both the US dollar and British pound):

Euro bottomed out at around 1.057 to the dollar at the end of November, and steadily gained against the USD every month since, with current valuation around 1.13-1.14 range. This hardly supports European exports to the U.S. Controlling for volatility, similar trend is against British Pound. About the only thing going the euro way today is yen and it is immaterial to the Euro area’s economy.

So euro zone economic growth appears to be loosing momentum since the start of 2Q 2016. And there are both short term drivers for this and long term ones.

Short term drivers, as outlined above suggest that current risks environment appears to be titled to the downside:


My view: we might see 2Q growth coming in at 0.3-0.4 percent, if April trends continue into the rest of 2Q. Overall, I expect 2016 growth to be around 1.4-1.5 percent which is just about to the downside on current consensus estimate of 1.5 percent.

Everyone is talking about Brexit referendum and the renewal of the Greek crisis as key threats. Put frankly - this is a smokescreen. When it comes to longer term euro zone growth prospects both are irrelevant. Growth within the euro area has nothing to do with the UK. And Greece has been effectively removed from the markets and economic agents' considerations - the country is no longer commanding any serious media attention (with markets fatigued by the never-ending 'crises'). With ESM / EFSF /ECB now seemingly the sole bearers of Greek debt (with IMF likely to take back seat in the Bailout 3.0 as per http://trueeconomics.blogspot.com/2016/05/11516-71-steps-guide-to-greek-crisis.html) Greek funding issues and any risk of a default are unlikely to trigger Grexit. Put more directly, even if Greece were to exit the Euro, no one will bat an eyelid over such an event.

Meanwhile, the real long term problems for the euro area are:


And there are even bigger structural headwinds:


Europe has been Japanified. And there is little that it can do to avoid this stagnation trap. There is no hope that  fiscal policy can do what monetary policy has failed to deliver - the great hope of Keynesianistas. And with that, both the monetary and the fiscal sides of European growth equation are out. What's left? Endless low interest rates (with a risk of policy error, should Germans rebel against Draghi's uncountable puts) and endless painful quasi-deflating (through low demand) of debt. Aka, pain.