In a recent op-ed in FT, Wolfgang Münchau raised a very valid point that globalisation, free trade and markets liberalisation do produce both winners and losers. Nothing new here. But the key point is that this realisation must be timed / juxtaposed against political and social realities on the ground

Quoting from Münchau (emphasis is mine): “In the past two years, there has been a dramatic reversal of public opinion in Germany about the benefits of free global trade in general, and TTIP in particular. In 2014, almost 90 per cent of Germans were in favour of free trade, according to a YouGov poll. That has fallen to 56 per cent. The number of people who reject TTIP outright has risen from 25 per cent to 33 per cent over the same period of time.  These numbers do not suggest that the EU should become protectionist. But… [EU leaders] should be more open-minded about the political costs of this agreement. …A no to TTIP would at least remove one factor behind the surge in anti-EU or anti-globalisation attitudes.

The marginal economic benefits of the agreement are outweighed by the political consequences of its adoption.

What advocates of global market liberalisation should recognise is that both globalisation and European integration have produced losers. Both were supposed to produce a situation in which nobody should be worse off, while some might be better off.”

Perhaps it is this dynamic - of the excess supply of losers and the over-concentration of winners - that is behind the dire state of global trade growth: 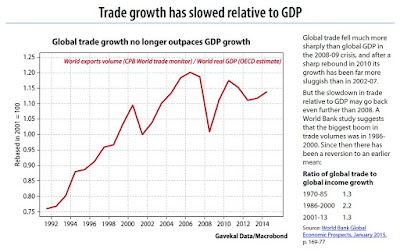 Wolfgang Münchau's article came in days ahead of the leaks that revealed the duplicit nature of EU and U.S. negotiating positions on TTIP (see Leaked TTIP documents cast doubt on EU-US trade deal), well before we knew that (again, emphasis is mine) "These leaked documents give us an unparalleled look at the scope of US demands to lower or circumvent EU protections for environment and public health as part of TTIP. The EU position is very bad, and the US position is terrible. ...The way is being cleared for a race to the bottom in environmental, consumer protection and public health standards."

In simple terms, TTIP is risking to further magnify the chasm between the winners in the Agreement (larger corporates on both sides of the Atlantic, plus Governments) and the losers (consumers, small firms and entrepreneurs).

The documents reveal that under the TTIP, "American firms could influence the content of EU laws at several points along the regulatory line, including through a plethora of proposed technical working groups and committees." If so, the TTIP will only increase bureaucratic costs and amplify impact of large corporates lobbying power at the expense of smaller firms and start ups.

As bad as the U.S. position, is, EU's position is even worse. Despite making lots of political noise about protecting European consumers, environmental and health standards etc, the EU negotiators have clearly adopted a two-faced-Janus position vis-a-vis different stakeholders. For example, on many points of more controversial U.S. proposals, "the EU has not yet accepted the US demands, but they are uncontested in the negotiators’ note, and no counter-proposals have been made in these areas." In other words, the EU leadership is saying one thing to the European audiences (advancing a virtuous position of a defender of consumer rights and environment) while positing no explicit objection to the U.S. proposals. In simple terms, the EU leadership appears to be outright lying and manipulating public opinion.

How do we know this?

"In January, the EU trade commissioner Cecilia Malmström said the precautionary principle, obliging regulatory caution where there is scientific doubt, was a core and non-negotiable EU principle. She said: “We will defend the precautionary approach to regulation in Europe, in TTIP and in all our other agreements.” But the principle is not mentioned in the 248 pages of TTIP negotiating texts." In plain English, Malmström is lying.

Another example: "The public document offers a robust defence of the EU’s right to regulate and create a court-like system for disputes, unlike the internal note, which does not mention them." Again, what is said for public consumption is at odds to what the EU is saying at the negotiating table.

Wolfgang Münchau pointed that "The marginal economic benefits of the agreement are outweighed by the political consequences of its adoption".

But you can also add to his equation negative social consequences of the TTIP and adverse consequences to SMEs and entrepreneurs. By the time you do the sums, it is clear that TTIP is not an agreement about free trade, but an agreement about corporatist  system takeover of transcontinental trade and investment flows. As such, its marginal benefits are negative to begin with.

Posted by TrueEconomics at 4:55 AM