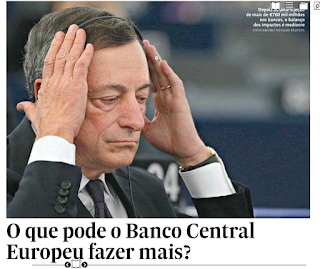 While the transmission mechanism has been improving in recent months across the euro area, leading to stronger lending conditions across the common currency area and a wider range of the member states' economies, inflationary dynamics remained extremely weak, even when stripping out the effects of oil and other commodities prices. As the result, ECB continues to see inflation as the key target and is likely to intensify its efforts to boost price formation mechanism.

Thus, despite all the ECB efforts, inflation remains stubbornly low and even slipping back toward zero in more recent data prints. Improved lending is not sufficient to create a major capex boost on the ground, weighing heavily on growth dynamics. Lower costs of borrowing for the euro area governments, while providing significant room for fiscal manoeuvre, is simply not sufficient to sustain a robust recovery. About the only functioning side of the monetary policy to-date has been the devaluation of the euro vis a vis the US dollar - a dynamic more influenced by the Fed policy stance than by the ECB alone.

My expectation is that the ECB will cut its deposit rate to -40 bps (a cut of 10 basis points on current) with a strong chance that such a cut can be even deeper. We can further expect some announcement on an extension of the QE programme beyond the end of 1H 2017.

The key problem, however, is that the ECB is also becoming more and more aware of the evidence that past QE measures in Japan, the UK, the euro area and across Europe ex-Euro area have failed to deliver a sufficient demand side boost to these economies. Thus, in recent months, the ECB has been increasing rhetorical pressure on member states governments to engage in supply side stimuli. Unfortunately, this too is a misguided effort.

In the present conditions, characterised by markets uncertainty, heavy debt overhangs and mis-allocated investment on foot of previous QE rounds, neither supply nor demand sides of the policy equation hold a promise of repairing the euro area economy. In addition, accelerated QE will likely feed through to the markets via higher volatility and possible liquidity tightening (bid-ask spreads widening, fear of scarcity of high quality government bonds and uncertainty over viability of the current monetary policy course).

Posted by TrueEconomics at 10:14 PM