10/2/16: Was Resource Boom a Boom for Commodities Exporters?


While everyone is running around with the collapsed oil prices, economists with an eye for cycles and history are starting to digest the aftermath of the passed commodities price boom that started around the beginning of the century and lasted until 2011-2012.

The issues relating to that boom are non-trivial. Commodities prices are cyclical and just as the boom turns to bust, so will the bust turn to boom. Therefore, one should really try to understand what exactly happens in both.

Andrew Warner of the IMF has a very interesting, actually fascinating, paper on the effects of the past commodities booms (the 1970s and the more recent one) on countries that are large-scale exporters of commodities. The paper relates naturally to so-called Resource Curse thesis.

So this is my summary of the main conclusions, relating to the most recent commodities boom.

Per Warner, “The global boom in hydrocarbon, metal and mineral prices since the year 2000 created huge economic rents - rents which, once invested, were widely expected to promote productivity growth in other parts of the booming economies, creating a lasting legacy of the boom years. This paper asks whether this has happened.”

Warner strips out growth in the commodities sectors in these countries and focuses on other sectors, trying to identify whether there was more rapid growth in these sectors during the boom compared to the periods before the boom.

Broadly-Speaking, he finds that “despite having vast sums to invest, GDP growth per-capita outside of the booming sectors appears on average to have been no faster during the boom years than before. The paper finds no country in which (non-resource) growth per-person has been statistically significantly higher during the boom years. In some Gulf states, oil rents have financed a migration-facilitated economic expansion with small or negative productivity gains. Overall, there is little evidence the booms have left behind the anticipated productivity transformation in the domestic economies. It appears that current policies are, overall, proving insufficient to spur lasting development outside resource intensive sectors.” 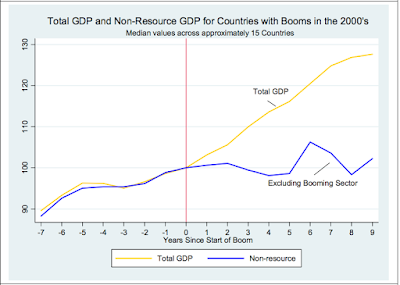 This is quite interesting. Investment should have boomed on foot of rising revenues from commodities extraction and this should have at least trickled down to non-commodities sectors. It turns out investment did not produce growth. Why? Maybe timing is an issue? Lags in time to invest and build new capital?

Warner goes on to check.

“An alternative way to summarize this result is to aggregate across countries. The data for all countries were synchronized not by calendar years but by years since the start of the boom. … [Data] shows that although total GDP rose strongly during the boom period, GDP for the rest of the economy has been essentially flat over the boom period. …Furthermore, it is apparent …that there has been no tendency for growth in non-resource GDP to accelerate during the later years of the boom, as would be expected had there been a lagged impact of investments made during the boom period. If overcoming the curse hinges on raising productivity in the rest of the economy, the data suggest that countries are not, as a rule, successfully overcoming the curse.”

“The data suggest that …it is simply rare to find a case of fast growth in the non-resource economy. …It emerges that only 5 of the 18 countries show growth over 2 percent per year. Hence slow growth in the rest of the economy continues to be the norm in resource-intensive economies, even during boom periods.”

Again, a paradox: greater revenues from commodities sectors should translate into greater savings rates, which should still trigger greater investment.

Warner “…examines the extent to which the previous findings can be attributed to a lack of saving, a lack of public or private domestic investment
effort out of the saving or a lack of economic return from the investment effort.”

Savings rose. “The evidence on saving rates shows that, for the 16 countries with available data, mean saving rates rose strongly in the boom period compared with the counterfactual period, from 16 percent of non-resource GDP to 27 percent. Furthermore, the current account shifted towards surplus by approximately 5 percentage points of GDP, so a significant part of the boom was saved in foreign assets.”

Conclusion? “Although investment data are not broken out [between commodities producing sectors and rest of the economy] it would be a rare occurrence if none of the extra investment fell on the non-resource economy. Therefore, although it is theoretically possible that the low impact on non-resource GDP growth is down to low investment rates, the available data do not support this view. They appear instead to point to low returns from the investment that was made.”

In other words: commodities boom revenues were wasted on poor quality investment projects that failed to boost non-commodities sectors productivity. And this includes public and private sectors investments.

As an aside, there is a fascinating discussion in Warner’s article about the specific group of commodities exporters - countries of the former USSR.

The reason this discussion warrants a separate treatment is the fact that “the resource-rich countries of the ex-Soviet Union require a method for testing for a curse that incorporates the special u-shaped pattern of GDP over time during the transition period. The u-shaped profile of total GDP is a natural outcome of a two-sector model in which one sector declines sharply (the state sector) while another rises gradually from a small base (the new private sector), as happened in all European post-socialist-planned economies.”

So Warner looks at Azerbaijan, Kazakhstan, Russia, and Turkmenistan. And finds that “against expectations, the results indicate that the five resource intensive countries experienced slower growth during their resource boom. Growth was statistically significantly slower than resource poor countries for all except Azerbaijan. This shows little evidence that the resource booms served to accelerate GDP growth above the levels experienced by other post-soviet economies. Based on this evidence it is difficult to claim that the resource booms served to raise the path of GDP above what it would have been without the booms.”

Wait a second. Common narrative, especially in the West, as it pertains to Russian and Kazakhstan, is that both countries have *only* grown because of higher commodities prices. This is what is normally used to explain the ‘Putin effect’ - rapid growth attained by Russia during the first two terms of the Putin Presidency. Alas, data, it seems speaks the opposite: rapid growth during the first two terms of the Putin Presidency is not consistent with the causality linked to the boom in commodities prices. And the actual boom period in commodities prices for Russia seems to be associated with slower, not faster growth, compared to non-commodities boom period (controlling for effects of economic transition) and to non-commodities exporting ex-Soviet counterparts.

Posted by TrueEconomics at 12:46 AM