In two recent posts, I covered

Now, let’s take a look at the Composite PMIs.

As noted in a more in-depth analysis, here: http://trueeconomics.blogspot.com/2016/02/3216-russian-services-composite-pmi.html, Russia’s Composite Output Index remained in contraction territory in January, posting a reading of 48.4, up on 47.8 in December 2015. The Composite index was helped to the upside by the Manufacturing PMI which was also in a contractionary territory at 49.8, but above the very poor performance levels of the Services PMI. January marked second consecutive month that both Manufacturing and Services PMIs for Russia were below 50.0. Last time that this happened was in December 2014-January 2015 and in February-March 2015 - in other words, at the dire depth of the current crisis. Overall, Russia is once again (second month in a row) ranks as the second lowest BRIC performer in terms of Composite PMI reading, ahead of only a complete basket case of Brazil.

As also noted in an in-depth analysis here: http://trueeconomics.blogspot.com/2016/02/2216-china-services-composite-pmis-for.html due to a substantial improvement in the Services PMI, China’s Composite PMI signalled stabilisation in overall economy-wide business activity in January, with Composite Output Index registering fractionally above the no-change 50.0 value at 50.1, up from 49.4 in December. However, overall, Composite PMI of China has been above 50.0 in only two of the last 6 months and on both occasions, index readings were not statistically distinguishable from 50.0. 3mo average through January for Composite PMI stood at 50.0 (zero growth) against 48.9 average through October 2015 and 51.3 average through January 2015. In other words, the economy, judging by Composite PMI might be closer to stabilising, but growth is not exactly roaring back.


India’s Composite PMI rose from 51.6 in December to an 11-month high of 53.3 in January. Per Markit, “Lifting the index were a rebound in manufacturing production as well as stronger growth of services output.” 3mo average for Composite reading is now a5 51.7, slightly down from 52.3 3mo average through October 2015 and compared to 52.8 3mo average through January 2015. With manufacturing and services order books now in an expansionary territory, “growth of new business across the private sector as a whole was at a ten-month high… Higher workloads encouraged service providers to hire additional staff in January, following a stagnation in the prior month. …Meanwhile, manufacturing jobs rose at a marginal rate.” While overall Indian economy has clearly returned to robust growth, underlying conditions remain relatively weak by historical standards. 3mo average Composite index at current 51.7 is well below the historical average of 54.8. India remained on track to being the strongest economy in the BRIC group overall for the 7th month in a row.

In the case of Brazil’s Composite PMIs, the index registered continued rate of contraction rate of contraction for 11th month in a row - a record that is worse than that for Russia. Over the last 24 months, Brazil’s Composite PMI has managed to reach above 50.0 on only 5 occasions, against Russia’s Composite PMI’s 7. Over the last 12 months, Brazil’s Composite PMI was above 50.0 only once, with Russian counterpart rising above 50.0 in 4 months. On a 3mo average basis, Brazil’s Composite PMI stood at 44.5 in January 2016, slightly better than 43.4 reading for the 3mo period through October 2015, but below 49.3 reading attained in January 2015. Per Markit: “January saw Brazil’s economic recession weighing on the private sector for another month …the seasonally adjusted Composite Output Index remained in contraction territory, highlighting a further sharp drop in activity. Moreover, the current sequence of continuous downturn has been extended to 11 months, the longest in almost nine years of data collection.” Both Services and Manufacturing sectors order books posted contractions, meaning that “the private sector as a whole posted an eleventh successive monthly decline in new business. Firms reported tough economic conditions and a subsequent fall in demand.” Once again, Brazil retained its dubious title as the worst performing BRIC economy - a title it has been holding for the last 11 months.

Charts and table to illustrate: 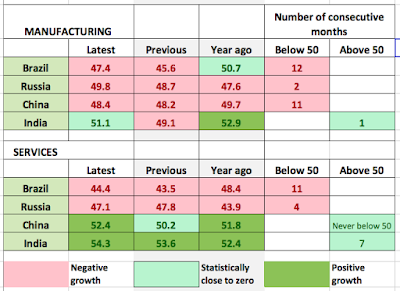 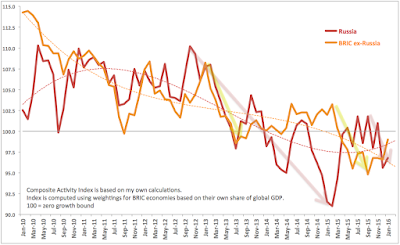 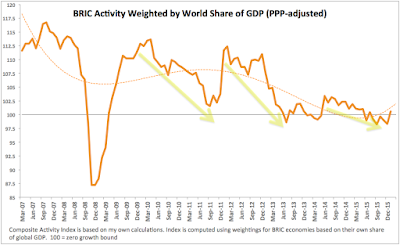 As shown in the above charts, Russia is now exerting a downward momentum on overall BRIC growth dynamics for the second month in a row. However, due to improvements in India and China, BRICs as a whole are now adding positive support for global growth. That support is relatively new and still fragile enough not to call a change in trend in the series.

Posted by TrueEconomics at 3:43 PM