The IMF today released its Article IV assessment of the Euro area, so as usual, I will be blogging on the issues raised in the latest report throughout the day. The first post looked at debt overhang while the second post presented IMF views and data on the euro area banking sector woes.

Based on the IMF view: in the Euro area, "the recovery continues. After weakness through mid-2014, growth picked up late last year and has continued in 2015, driven by domestic demand. Private consumption remained robust, reflecting rising employment and real wages, while fixed investment has expanded moderately. Among the large economies, Germany continues to grow slightly above 1½ percent, while Spain is rebounding strongly. Italy is emerging from three years of recession, and activity in France picked up at the beginning of this year." 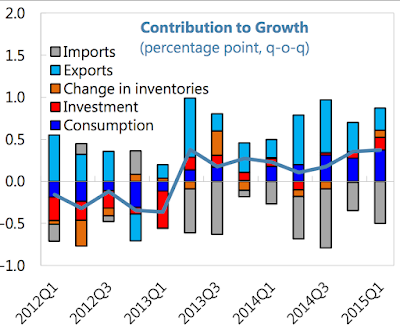 And more: stripping the uplift in inventories, headline GDP growth in 1Q 2015 would have been worse than in 4Q 2014. And, despite collapse in oil (energy) prices and increase in consumption, imports have increased their drag on GDP growth.

Meanwhile, Industrial Production is virtually flat, as is Construction activity: 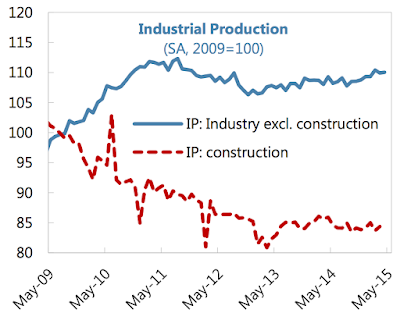 So the net medium-term result is bleak: "Despite the cyclical upturn, growth of only about 1.6 percent is expected over the medium term, with potential growth averaging around 1 percent. The output gap would close around 2020 with unemployment still near nine percent and inflation reaching 1.7 percent, somewhat below the ECB’s medium-term price stability objective. The picture is more disappointing in comparison to the U.S. with the per capita income gap now the largest since the start of EMU, and projected to widen further."

How much further? Oh, take a look at these: 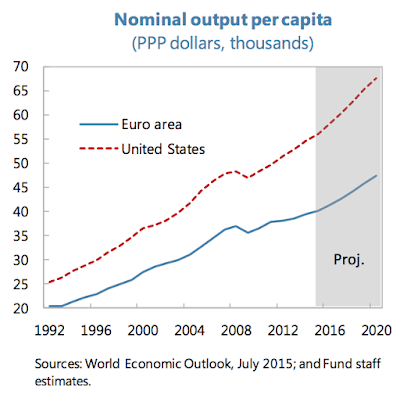 A positive scenario uplift can only be expected from long-term and painful reforms. IMF lists them here:

"A scenario combining monetary easing, fiscal support under the SGP, and comprehensive structural
reforms would include:


So combined effect of the above over the longer term: "The growth dividend of a balanced policy mix can be large. The EUROMOD module of the IMF’s Flexible System of Global Models (FSGM) points to a substantial growth dividend, particularly from fiscal policies and the improvement of the credit channel. Real growth for the euro area would increase by 1.3 and 1.4 percentage points to 2.7 and 3.0 percent for 2015 and 2016, and HICP inflation rate in these two years would rise to 0.6 and 2.1 percent. The output gap would close by the end of 2016, about four years faster than in the baseline, and unemployment would be 0.8 percentage point lower than in the baseline by 2016."

Which is, honestly speaking, laughable because of two points worth noting:
1) There is an ongoing and deepening reforms fatigue which is pushing the reforms horizon out toward the next downturn cycle (in other words, we are unlikely to see majority of real reforms to be enacted before the next recession strikes); and
2) Even with all things going the IMF way, unemployment will remain atrociously high. In other words, growth uptick even in the best case scenario is likely to be largely jobless.

So summary of growth uplift drivers is in the chart below: 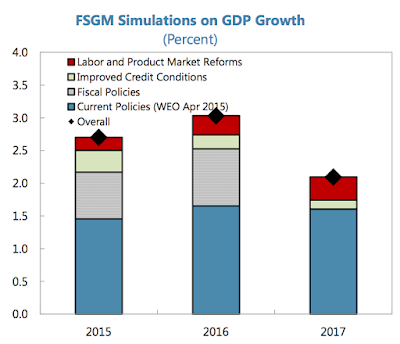 Expect the expected: looser fiscal policy being the largest new contributor to growth in 2016; labour markets and product markets reforms being marginal - adding at most 0.25-0.3 percentage points to annual growth rates. The fabled 'credit conditions improvements' (banks doing their bit for growth) is expected to be minuscule (despite all the hopes attached to them by the likes of Irish authorities and all the resources of the state devoted in 2008-2011 to repairing them). And headline growth expectations for baseline scenario still resting at 1.7% and 1.6% GDP growth in 2016-2017.

Here is the summary of IMF projections out to 2020: 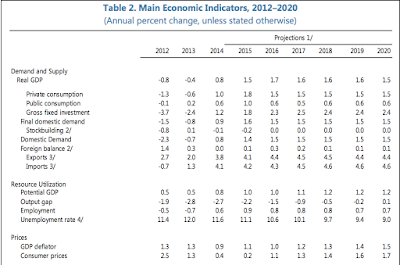 Yep, the first line of projections above shows perfectly well the poverty of low aspirations that Euro area has become, while the unemployment rate projections confirm the same. Everything else - all the talk about structural reforms, growth drivers and the rest - is pure unadulterated bull. Even in the age of massive QE, collapsed oil / energy costs, and improvements in [sliding back on] fiscal 'reforms', the euro area remains the sickest economy in the advanced world.

Posted by TrueEconomics at 4:14 PM