The IMF today released its Article IV assessment of the Euro area, so as usual, I will be blogging on the issues raised in the latest report throughout the day.

Per IMF, low inflation environment in the Euro area is "pushing up real rates, more in countries with higher debt burdens"

And here's a handy chart from the Fund: 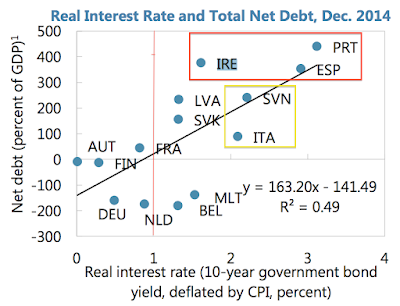 Broadly-speaking, with annual expected inflation at or below 1%, we have serious pressure on Portugal and Spain, where Government borrowing costs (and by some proximity, banks funding costs) have not declined as dramatically as in, say, Ireland. The second sub-group at risk are countries with lower debt ratios, but still high enough funding costs - Slovenia and Italy. Ireland is in a separate category, having enjoyed significant declines in cost of funding, without a corresponding improvement in debt ratios. In other words, for Ireland, so far, the challenge is less of day-to-day funding of debt, but the quantum of debt outstanding. Short-run sustainability is fine, but longer run sustainability is still problematic.

The problematic nature of debt carried across the euro area goes well beyond the sovereign cost of funding and into the structure of European banks balance sheets.

Per IMF: "A chronic lack of demand, impaired corporate and bank balance sheets, and deeply-rooted structural weaknesses are behind the subdued medium-term outlook:

Note, I wrote extensively on the three factors holding back credit cycle before and recently testified on the subject at the Joint Committee on Finance, Public Expenditure and Reform, the Houses of the Oireachtas: http://trueeconomics.blogspot.ie/2015/07/8715-ecb-qe-strong-monetary-weak-real.html

Here is a chart highlighting the state of NPLs across the Euro area, U.S. and Japan which shows just how dire are the conditions in European banking really are: 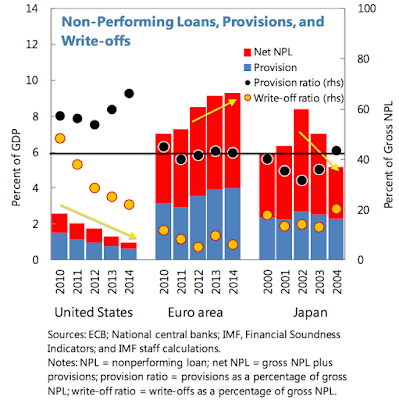 Even by provisions measure, Europe is a total laggard. Which means there is plenty more delve raging left in the system.

And here is the IMF chart on productivity: 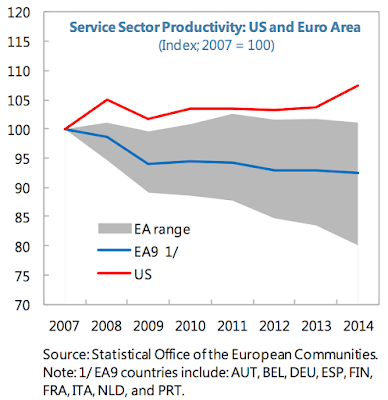 Which really neatly highlights the debacle that is euro area productivity growth: we have a massive uplift in unemployment during the crisis. Normally, rising unemployment automatically induces higher labour productivity through two channels: by destroying more jobs in lower value-added sectors, and by destroying jobs of, on average, less productive workers. In Europe, of course, the former factor did took place, but there was no corresponding retainment of activity in the higher value-added sectors, and the latter factor did not take place because of inflexible labour markets (for example, unions rules preventing lay offs of less productive staff, basing any employment adjustments on superficial criteria of tenure and/or union membership/contracts structures). So net result: jobs destruction (bad) was not even contributive to improved productivity (bad). But things are actually even worse. Chart below shows the distribution of productivity growth by broader sector, comparing euro area and the U.S.: 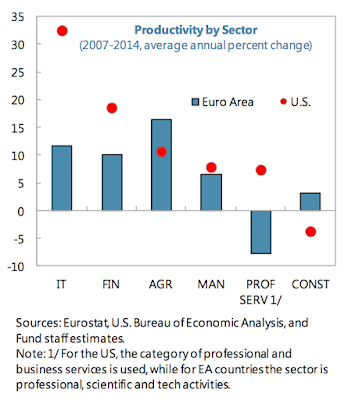 This is truly abysmal, for the euro area, which managed to post negative growth in productivity in Professional Services, and undershoot U.S. productivity growth in everything, save agriculture (where U.S. already enjoyed significant pre-crisis advantage over the EU, which implies normally lower productivity growth for the U.S.) and Construction (where the U.S. has enjoyed more robust recovery since 2010 against continued decline of activity in the euro area).


Yeah, remember those flamboyantly delightful days of denial, when everyone was keen on repeating the Krugmanite thesis that 'debt doesn't matter'? In reality, debt overhang is such a bitch… especially when it comes to messing up value-added investment and productivity growth. But never mind - Europe is not about these capitalist concepts, with its Knowledge Economy (as measured by IT and Professional Services and Manufacturing) shrinking in both metrics compared to the U.S.

Stay tuned for more excerpts and analysis from the IMF report.

Posted by TrueEconomics at 3:16 PM