One of the main narratives for understanding European economy's longer term growth outlook has been the risk of Japanification: a long-term stagnation punctuated by recessionary periods and accompanied by low inflation and or deflationary episodes and pressures. I posted on the topic before (see for example here: http://trueeconomics.blogspot.ie/2014/10/19102014-chart-of-week-japanising-europe.html) and generally think we are witnessing some worrying similarities with Japan, driven primarily by longer-term trends: debt overhangs across real economy, nature of debt allocations (concentrated in less productive legacy assets, such as property in some countries, physical capital in others) and, crucially, demographics-impacted political and institutional paralysis.

One recent paper, titled "The Macroeconomic Policy Challenges of Balance Sheet Recession: Lessons from Japan for the European Crisis" by Gunther Schnabl (CESIFO WORKING PAPER NO. 4249 CATEGORY 7:MONETARY POLICY AND INTERNATIONAL FINANCE, MAY 2013) sets out the stage for looking into the direct comparatives between Japan's experience and that of the EU.

Per Schnabl, "Japan has not only moved through a boom-and-bust cycle …almost 20 years earlier than Europe but has also made important experiences with a crisis management in form of monetary expansion, unconventional monetary policy making, fiscal expansion and recapitalization of banks. Although Japan has reached the (close to) zero interest rate environment more than a decade earlier than Europe and gross general government debt (in terms of GDP) has gone far beyond the levels, which are today prevalent in Europe, growth continues to stagger."

In other words, as we know all too well, Japan presents a 'curious' case of an economy where neither monetary, nor fiscal policies appear to work, even when applied on truly epic scale.

What Schnabl finds is very intriguing. "The comparison between the boom-and-bust cycles in Japan and Europe with respect to the origins of exuberant booms, the crisis patterns, the crisis therapies, and the (possible) effects of the crisis therapies shows that despite significant differences important similarities exist. With the growing socialisation of risk Europe follows the Japanese economic policy decision making pattern, with – possibly – a similar outcome for European growth and welfare perspectives. The gradual decline in real income in Japan should be incentive enough for a turnaround in economic policy making in both Europe and Japan."

The key to the above is in the phrase "With the growing socialisation of risk Europe follows the Japanese economic policy decision making pattern" which of course has several implications:

Here are some slides from Schnabl's November 2014 presentation on the topic: 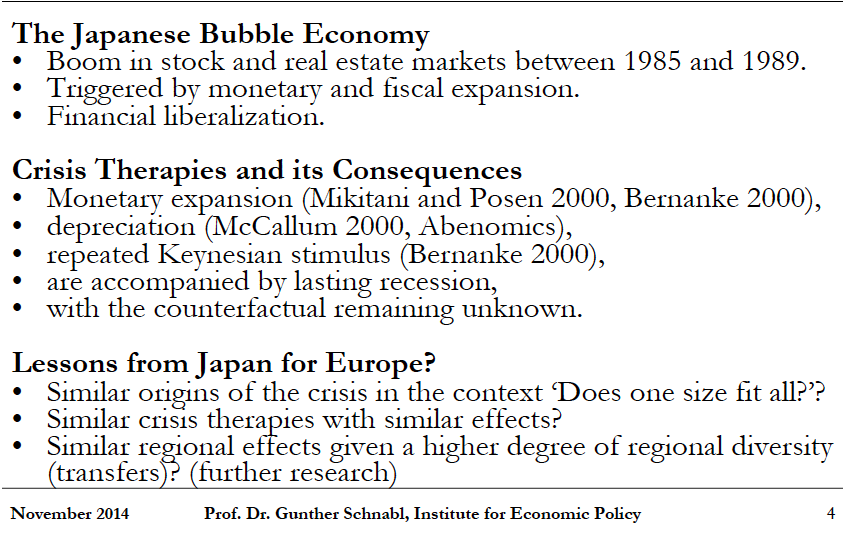 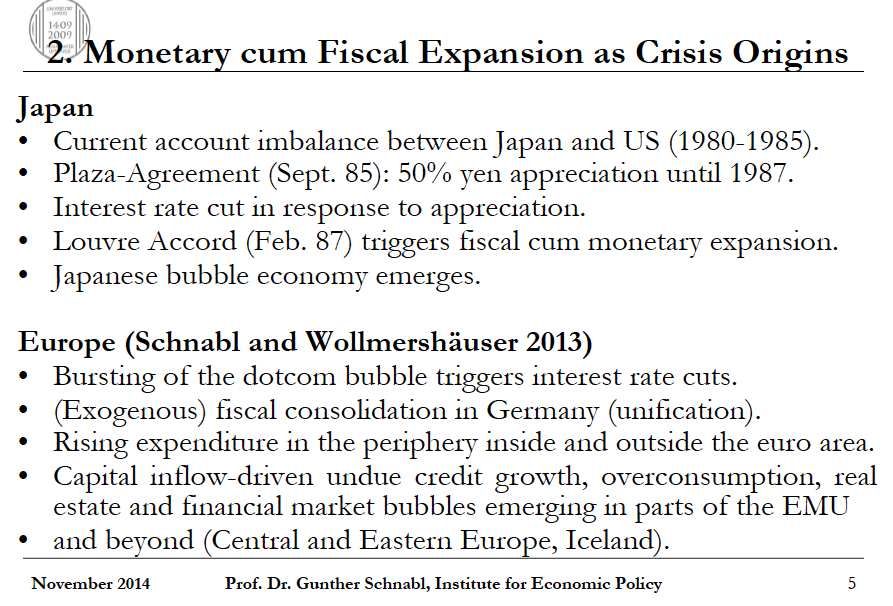 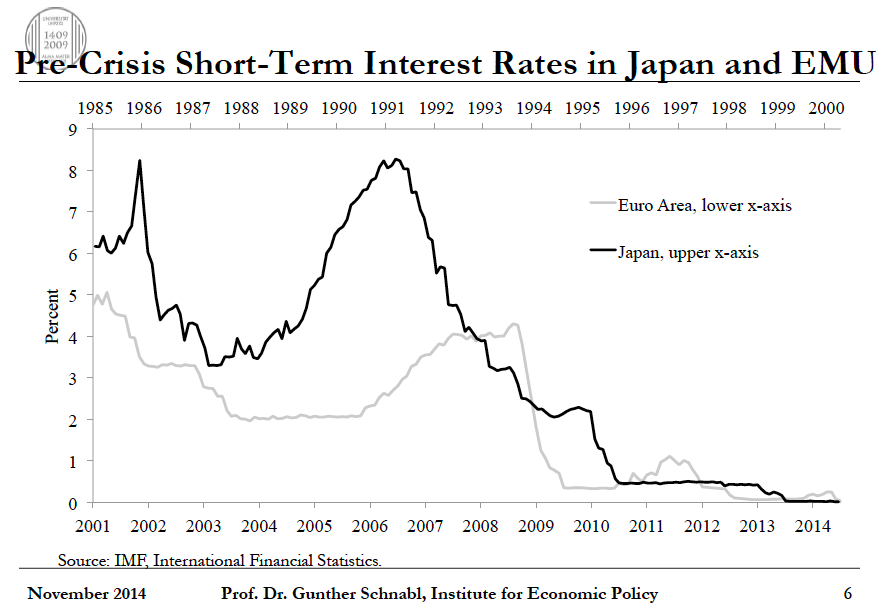 And the associated public sector balloon (do ignore some of the peaks that were down to banks rescue measures and you still have an upward trend): 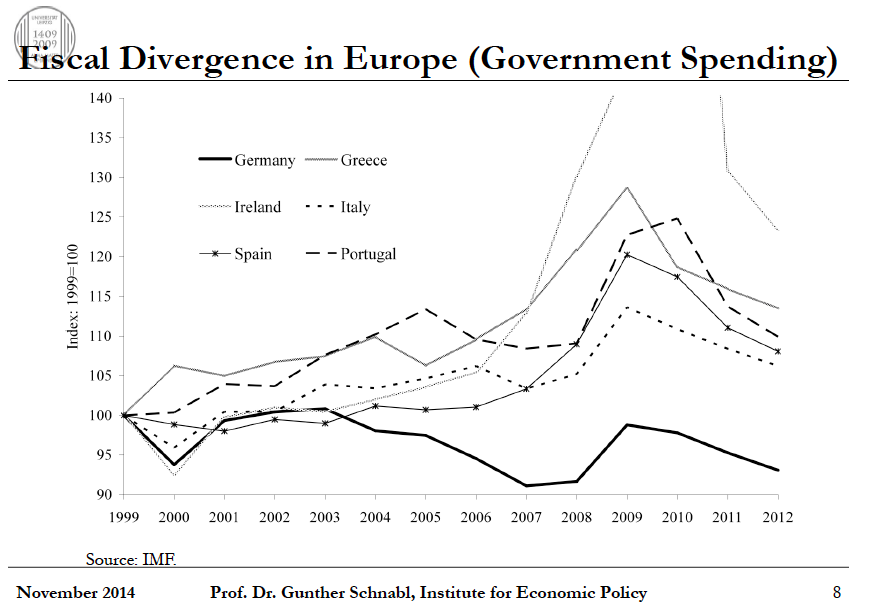 And an interesting perspective on the Japanification scenario for Europe: 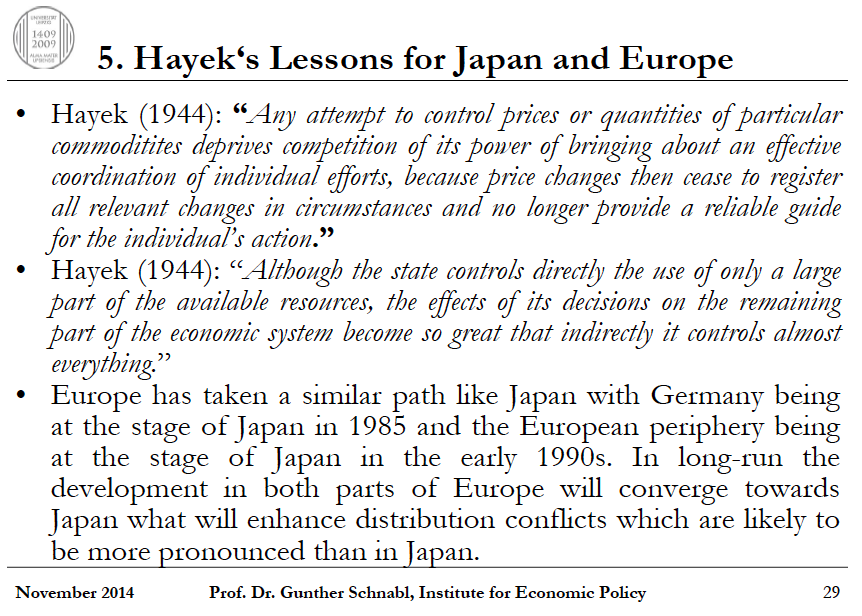